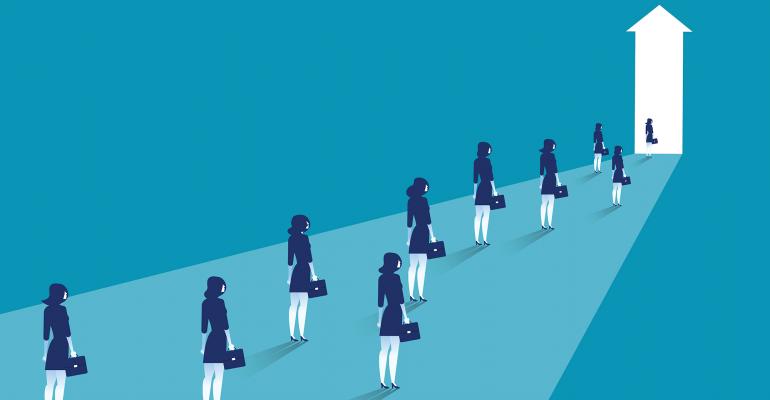 All the well-meaning policies the industry rolls out to promote women will be ineffective until the cultural perceptions of the industry change.

There’s a perceptual experiment you can conduct right now. Open your search browser, type “financial advisor” or “financial planner” and search for images. Given that the Certified Financial Planner Board of Standards estimates that 23 percent of financial advisors are women, how many of the first 100 images returned by the search show a woman in the professional role?

Of the first 100 images I saw on a recently conducted search, 97 were variants of the familiar male financial professional, in a suit and tie, consulting with a very satisfied looking couple. Only three featured women in the role, underrepresenting their participation even further. It’s an example of how a supposedly unbiased algorithm takes implicit attitudes and makes them explicit.

Perception and culture may be the most insidious impediments to women’s success in financial services, suggests Sally Helgesen, co-author of How Women Rise: Break the Twelve Habits That Hold You Back. “The biggest impediment to women’s success on Wall Street, like Silicon Valley, is the culture,” she says.

“Perception accounts for much of why financial services organizations have such a hard time retaining women,” Helgesen adds. “Until that perception is finally dislodged, all the good faith efforts underway throughout the financial services industry to recruit, retain, and promote women will be undermined by implicit bias that remains unchallenged.” The problem is not in hiring women; it’s in retention and plateauing careers. Research shows that the reward system that has been put in place by men to motivate men often does the reverse for many women.

The traditional reward system works to sideline a critical number of women who outperform men. Variable commission-based structures are often deterrents to many women who may be more inclined to value stability and predictability over absolute aggregate income.

The result is that despite promising starts and even demonstrated evidence of superior performance, too many women asset managers feel marginalized and undercompensated, according to Dr. Laura Mattia, a former financial advisor and now the Program Director of the Personal Financial Planning Program at Muma College of Business at The University of South Florida in Tampa. Mattia studies the implicit bias that creates barriers for women in financial services. “Some key challenges women face when they join male-dominated environments in asset management is that they struggle to see a clear path pointing towards success,” she says.

Yet, the failure of the reward system persists despite evidence that fixed income mutual funds managed by women consistently outperform those run by men. Repeated studies have shown that over the past 15 years, actively managed fixed income funds managed by women outperformed the average returns of their respective sector category by 0.35 percent annually, according to a new study by Morningstar Inc.

Nevertheless, only 14 U.S. debt funds were managed exclusively by women as of September 2017, compared with 47 in 2004, according to Morningstar Inc. The share of women supervising bond or equity assets has stalled at about one in 10 since 2015.

Much of this disconnect can be accounted for by the pipeline problem. It takes a decade or more for an individual of either gender to secure a senior management role. Those often-grueling years takes a toll on the number of women who aspire to join the ranks of influence in portfolio management.

The prevailing reward system assumes that people working in financial services are motivated, by and large, solely by financial reward. Gender research demonstrates that what women regard as motivating, sustaining, and rewarding in the long run tends to be skewed more toward the experience they have at work and having some degree of control over time. Even when women stick it out, the engrained reward system accounts for some of the disparities in income between men and women.

Unaware bias continues to plague the financial services, just as it does every competitive field. The bias plays out like this: If a woman is very competent and authoritative, we may respect her, but we don’t tend to like her. And if we like her—especially when we unconsciously set her in the role of a caretaker—then we tend not to respect her. Both men and women fall prey to this bias. 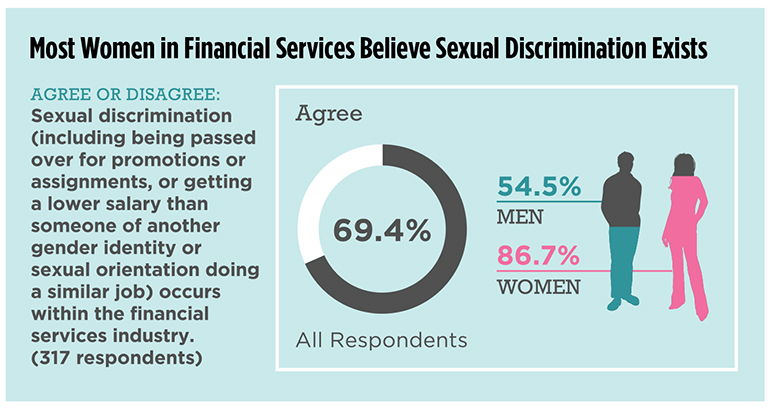 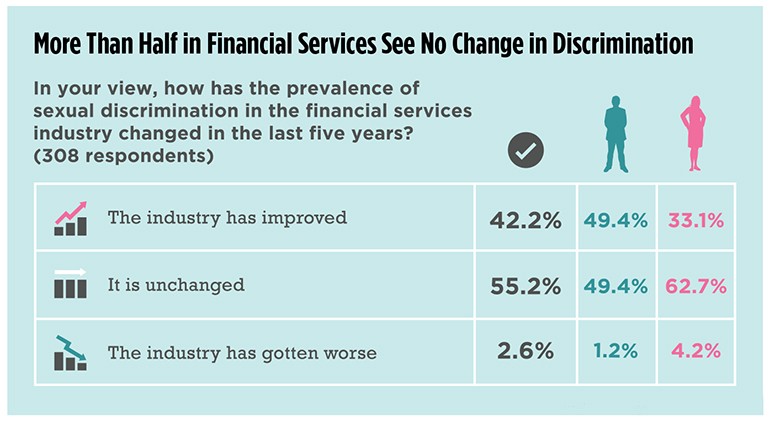 The double-bind comes into play at every turn of a woman’s career and presents career-limiting predicaments. The bias, for example, sets up hiring authorities (of both genders) who may think, “If I hire a man and he fails, that’s on him. But if I hire a woman and she fails, that’s on me.” Research shows that the bias is almost insurmountable when there is only one woman on a team. As there are more women on a team, the bias tends to lose steam.

One result is that women in finance tend to gravitate to less competitive jobs. For example, the best-paying jobs in finance are often commission-based and sales-oriented. Research shows that, on average, women are more risk-averse then men, so such feast-or-famine type jobs are often less attractive. (That same attribute is thought to partially account for why women asset managers outperform their sector categories.)

Many women simply give up and leave. When women consistently experience an inferior quality of work life and a lack of control over time, they tend to be less motivated by the promise of financial reward. 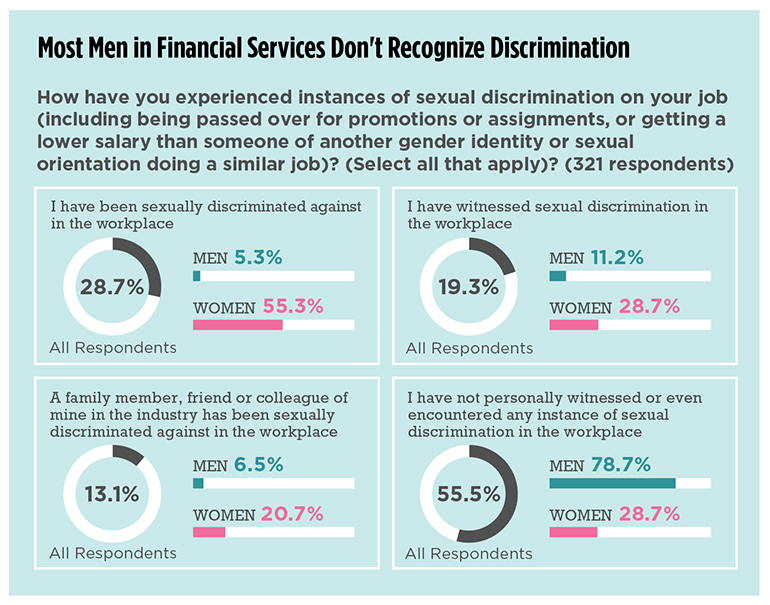 One woman who stuck it out and succeeded is Nicole Kornitzer, a portfolio manager of the Buffalo International Fund. With undergraduate and graduate school training in French, Kornitzer realized early in her career that she loved investments. After some years as an analyst, she leveraged her language skills and transitioned to international funds. Based in Paris, she was promoted to portfolio manager.

Conditions for women in financial services in France are marginally better than in the United States. Whereas in the U.S., 10 percent of funds are managed by women, in France, that number is 21 percent. “Progress is happening, but it’s slow,” Kornitzer says. She notes that France has more friendly work policies in terms of flexible work schedules, maternity leave, child care and other benefits that promote high-quality, work-life balance for both women and men. On the other hand, the demands of client-facing professionals on both sides of the Atlantic make it difficult for many high-performing women to take advantage of the benefits that exist. 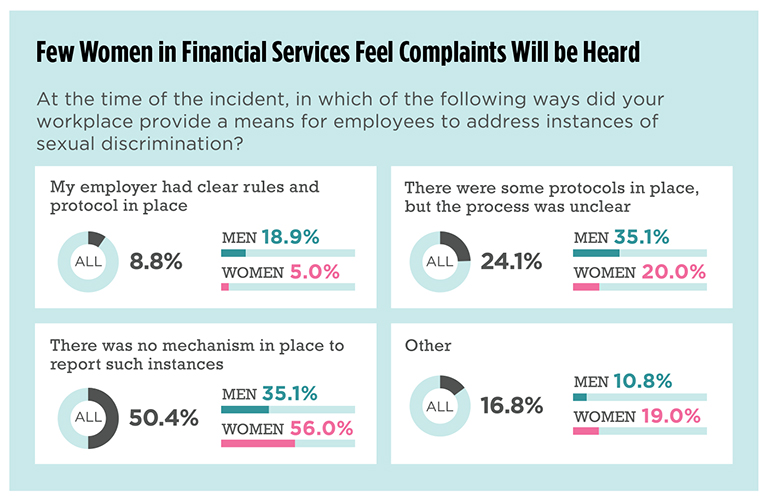 The financial services industry is taking these challenges seriously. It’s working hard to shed The Wolf of Wall Street image with which it has long been associated. No company will tolerate an employee who openly claims the falsehood that men are better suited to finance than women. It’s taking steps to increase accountability and transparency. The profession is stepping up to the reality of sexual harassment and the #MeToo movement. It’s considering how issues such as forced arbitration creates obstacles for accountability. Yet unconscious bias persists throughout the work world and culture-bound policies—like reward programs—resist change.

In her book, Gender on Wall Street, Mattia has an example of why some high-performing women still feel demotivated by male supervisors. It’s the story of a female advisor who landed as a client a widow who had recently inherited $13 million. The widow gave the advisor half of the assets to manage. But instead of congratulating the advisor, the supervisor criticized her for not getting it all. “The advisor understood in a way the supervisor did not, that the goal is always to build relationships,” Mattia notes. “The assets will follow.”