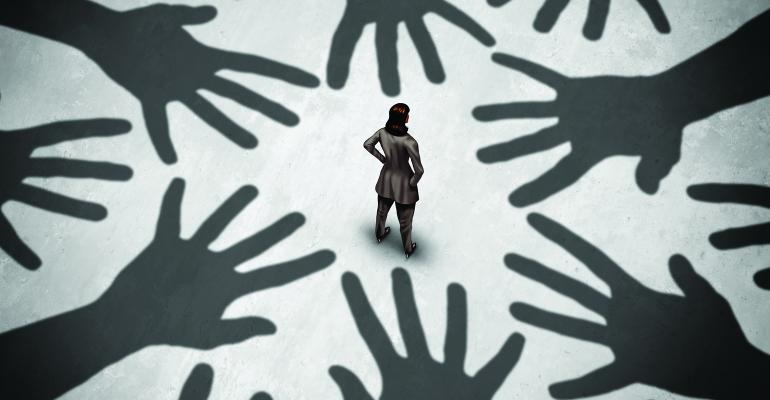 The Nature of the Beast

Despite the wider #MeToo movement, many women in the financial advisory industry who have been sexually harassed are still reluctant to come forward and report the abuse.

Over the last few weeks, stories of women who have experienced sexual harassment in the financial services industry have poured into our inboxes. Many of those stories sound a lot like this one:

A woman, who asked to remain anonymous, was working as a personal banker for a major firm in California, with responsibility for the top 20 percent of clients. One of them, a chief financial officer, would aggressively flirt with her. “He would say, ‘When are you going to take me to the opera? When are you going to take me to a sporting event?’ I would say, ‘I will take you any time you want to go. You would take a date, and I would bring my husband.’ And he says, ‘No, I want this to be just you.’”

Another day, she was sitting at her desk when a client showed up. “This guy happened to walk in, and in the midst of me having a conversation with these other people, he turned my chair around, kissed me, and laughed,” she says. “I got up, and I went into the manager.”

“He responded, ‘I expect you do whatever it takes to keep that client.’ So I quit. I walked out the door. It was pretty traumatic because I worked hard to get to that position.”

Compounding the issue is that victims in this industry are too often not coming forward and reporting it.

It’s no surprise that sexual harassment is an issue in financial services, as shown in many surveys. In a recent WealthManagement.com survey, nearly 62 percent of respondents who were harassed or witnessed harassment said they did not use the protocols those firms have in place to address the incident. That number is nearly 66 percent for women.

Respondents gave a range of reasons, including fear of retaliation and ostracism within the office, the fact that the offender was the victim’s manager or a belief that the complaint would not be taken seriously.

“The culture was such that I did not believe management would do anything,” wrote one respondent. “When I mentioned it to management in my annual review (not a formal complaint or filing), they laughed and said it was ‘the nature of the beast.’”

In recent months, there have been some high-profile cases of sexual misconduct in the industry. In October, Fidelity dismissed Gavin Baker, a star portfolio manager accused of sexual harassment. And in December, Morgan Stanley fired former Congressman Harold Ford Jr. after an investigation into sexual harassment, which he has denied. The latest public case involves Douglas Greenberg, a top advisor at Morgan Stanley in Lake Oswego, Ore., who, The New York Times reports, had a history of violence against women that the firm allegedly knew about. The firm has since fired him.

All the firms we spoke to confirmed they have policies for reporting harassment in place. Morgan Stanley, Bank of America’s Merrill Lynch, RBC and Raymond James all said they maintain hotlines that employees can use to report misconduct, even anonymously.

At UBS, complaints of sexual harassment fall under the firm’s policies and procedures for whistleblowing, subject to the same protections for those who report misdeeds. At Wells Fargo, there’s a centralized team dedicated to investigating misconduct. Morgan Stanley has a similar group called Employee Relations Specialists.

There may be official policies and protocols in place, but if over half of the employees subjected to harassment aren’t using them, it’s clear they aren’t working as intended.

“It’s really necessary for [firms] to be out in front of this and treat this like a real business problem that they need to be figuring out the solution to and giving it the appropriate prioritization within the organization,” says Eric Bachman, a principal with Zuckerman Law, where he is the chair of the discrimination and retaliation practices. “And until that happens, you’re going to keep seeing sexual harassment problems in this industry.”

Some argue that the industry had its #MeToo moment in the mid-’90s, when a group of women working for Smith Barney sued the firm for its hostile work environment, discriminatory policies and unequal pay. The stories of sexual assault and humiliation in that lawsuit prompted many other companies to put harassment protocols in place.

Still, over a third (39 percent) of respondents indicated there was no mechanism in place to report instances of sexual harassment, while 28 percent said that while there were some protocols in place, the process was unclear. Just 16 percent of respondents said their employers had clear rules and protocols. The numbers are similar across business channels.

“You can have protocols in place that look great in theory, but if nobody is ever actually disciplined for having harassed somebody, then those protocols start to look like your complaint goes into a black hole and you never know what has happened other than you start to fear that you’ll be retaliated against,” Bachman says.

Howard Lavin, a partner at New York-based law firm Stroock & Stroock & Lavan, who focuses on employment and labor law issues, says he would be surprised to find any bulge bracket firm without protocols and training programs. “But it may be that the firms aren’t doing a good enough job persuading employees that they can make a complaint without adversely impacting their careers.”

Large national brokerage firms are expected to have resources in place for reporting harassment. Smaller shops, like registered investment advisory firms, are more likely to not have formal complaint processes in place.

“They’re just completely inadequately equipped to be able to deal with and respond to these types of issues,” says Marc Cohen, chief operating officer at MarketCounsel. “The advice that we’re giving to our RIA clients, all of whom, by really any measure, would be considered small businesses, is not to try to handle this internally because it’s likely to be mismanaged by folks who have never been professional managers and never been in a position of having to deal with such issues in their careers for the most part, and instead, to rely on third parties.”

Regardless of size, none of the firms contacted would say how many reports of misconduct or sexual harassment were made at the firm, or even if there were any changes in the frequency of complaints made over time.

The Equal Employment Opportunity Commission estimates there were 84 charges filed to the agency alleging sexual harassment in the finance and insurance industry in fiscal year 2016. That’s down from an estimated 142 charges in fiscal year 2011.

That’s low compared to other industries, says Joni Hersch, a professor of law and economics at Vanderbilt Law School, who analyzed the rate of these types of reports to the EEOC.

A written testimony by Fran Sepler, president of Sepler & Associates, to the EEOC provides a clue as to why:

“In certain fields, you will hear the term ‘eminence.’ In others you will hear the less dignified but aptly descriptive ‘rainmaker’ or ‘big producer.’ These are people who have excelled in their fields and have earned a stature that warrants certain privileges … I think anyone who has worked in the professions I mentioned knows at least one of these people, and recognize fully that while there is increasing likelihood that employers will act in the face of their bad behavior, it is more likely that the reporting target be mollified than the harassment stop.”

Bachman agrees. “If it’s a high producer within the firm who’s doing the harassing, you’re going to find a lot of the times that there’s even less stomach by the firm to go after that person and hold them accountable precisely because they are making the firm so much money,” he says.

Many in financial services chalk it up to an industry norm, an ingrained culture, one where victims are trained to develop a thick skin and move on.

“There is a generation of men that simply don’t recognize harassment when they do it or when they see it,” says Alan Moore, co-founder of XY Planning Network, a support network for advisors looking to serve next generation clients. “Women have been told time and time again, either verbally or through inaction, that harassment isn’t a big deal. You should just put on thicker skin and get over it.”

“And so we haven’t given women a way to actually end the harassment without basically having to quit their job and move on.”

XYPN instituted a code of conduct for its conferences that explicitly prohibits any form of discrimination or harassment due to gender, sexual orientation, race, ethnicity, age or even ability, as well as a mechanism for reporting. XYPN’s conference app included a function for reporting inappropriate conduct.

Rather than speaking up, some victims choose to go to another firm or, in some instances, leave the advisor channel altogether.

MarketCounsel’s Cohen says his firm helped a small female advisory team leave a wirehouse and set up their own firm because of what they described as a “frat house-like environment” in their branch office.

“[Starting their own RIA is] an outlet for them,” Cohen says. “That’s the escape, the removal from the situation is the only way that they know how or feel comfortable dealing with it in those unique situations.”

What More Can Be Done?

Nathaniel Glasser, a member of Epstein Becker Green in the Employment, Labor & Workforce Management practice, says most training programs deal with harassment in the abstract, when what’s needed is the inclusion of real-world examples that mirror situations wealth managers may encounter themselves.

Bachman suggests managers’ bonuses could be tied to how well they adhere to the diversity and inclusion policies of the company, something former U.S. Attorney General Eric Holder suggested to Uber. “Certainly, in the financial services industry money talks, and folks are going to take notice where it starts to hit them in the wallet,” he says.

Some firms are even starting to rely on what Lavin calls “self-help” policies, which is when employees “work things out” amongst themselves and discretely log the incident with the human resources office. “If there’s a recurrence, then the company knows what they’re dealing with.”

On the other end of the spectrum, Lavin says he’s seeing more “noisy terminations,” where companies fire an accused harasser and go public with the reason. It’s not altogether altruistic. “If the harasser is given cover, social media may well expose the real reason and then the company looks weak or out of touch. Companies, in effect, are trying to get credit for doing the right thing.”

These ideas are all well and good, but Hersch says there is little evidence that reporting procedures, training and education have much of an impact on the amount of sexual harassment in the workplace. Rather, what works is having a corporate culture—a “tone” for the firm set at the very top—that does not tolerate harassment or discrimination.

“Whether somebody feels comfortable in reporting really has to start at the top, and then work its way down to the various levels of management,” says Glasser. “Because if there isn’t that buy-in, and there’s not enough of that appearance of buy-in from management, that might impact whether people are going to use the procedures and processes that are actually in place.”

Many say the biggest breakthroughs in alleviating the barriers to reporting abuse will only come when there is a more equitable distribution of women in senior positions.

“I think [women are] going to be more likely to actually take concrete action against folks who’ve been shown to be harassers, so it’s a little bit of a chicken and the egg in terms of glass ceiling and sexual harassment,” Bachman says. “Hopefully, as women continue to attain higher positions in these financial services companies, that will bring about much needed change to the workplace sexual harassment environment.”