Even as new Schwab executive Tom Bradley tours the country reiterating the firm’s commitment to the sub-$100 million advisor, larger RIAs say they too are concerned with service levels and technology downgrades in the wake of the Schwab acquisition, according to a WealthManagement.com survey of TDAI RIAs.

Advisors that custody with TD Ameritrade clearly have mixed feelings about the firm’s impending acquisition by Schwab. While fully half of the nearly 200 advisors surveyed by WealthManagement.com were taking a wait-and-see attitude, almost 40% are very concerned about future service levels being negatively impacted by the deal.

Only a minority of advisors are “very concerned” about the combined company not meeting their technology needs. Even so, slightly more than 11% were using the potential deal as an opportunity to shop around for a new custodian.

Tom Bradley, the former head of the RIA business at TDAI, was recently recruited by Schwab executive Bernie Clark to ease their fears by forming a business unit dedicated to the sub-$100 million RIA—a unit that could top 10,000 RIAs in a combined Schwab-TD Ameritrade Institutional custodian. Those firms—largely younger and more tech-savvy advisors—are a foundation for Schwab’s future, he said.

“These advisors are a major part of fueling growth, and fueling the future growth of the industry,” Bradley said recently in an interview with WealthManagement.com. “We want to serve them well, not just because it’s a good thing to do, but because it’s a good business.”

Surprisingly, the WealthManagement.com survey suggests it is advisors in the middle of the pack—from $50 million to over $200 million in AUM—that are even more concerned with service levels and technology downgrades under Schwab than are smaller firms. 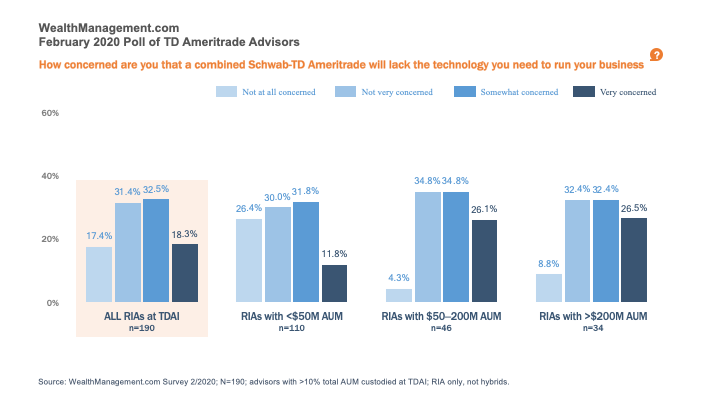 That runs counter to the widely shared outlook that it is smaller TDAI RIAs who most fear they are in danger of being lost or ignored once the integration between the two firms is complete.

Slightly over 1 in 4 of the smaller RIAs say they have the same level of anxiety. 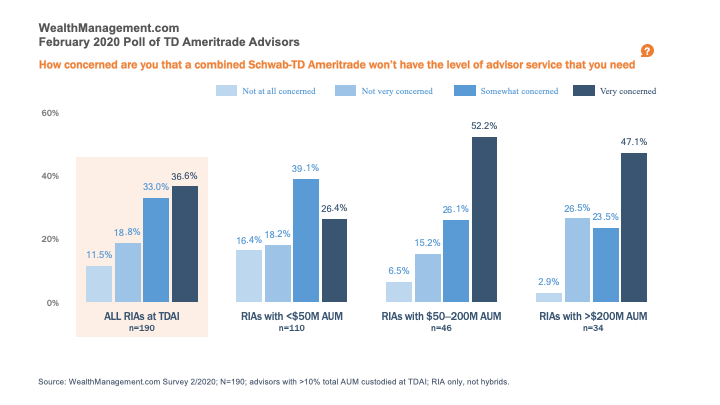 Since the merger was announced, Schwab executives, including Chief Executive Officer Walt Bettinger, have been at great pains to point out that the smaller RIAs are a significant and important client segment for the firm, and have repeated their commitment to serve the space with high service levels and the top technology options available.

Bradley said he was surprised to learn that 4,500 of the approximately 7,500 RIAs that custody with Schwab have less than $100 million in assets, and all but some 1,000 of those advisors are state registered, suggesting Schwab is likely the custodian for the vast majority of their assets. Those firms, he said, present a large opportunity for Schwab’s future growth.

Even smaller firms that aren’t on a growth trajectory will be supported at Schwab, Bradley said. “You have some people that run $50 million and they have a lifestyle practice and they live in North Carolina where there’s a lower cost of living. That’s great, we want to take care of those people, that’s excellent business for us. Many of them will grow and we want to grow with them,” said Bradley.

Head of Schwab Advisor Services Bernie Clark, who joined Bradley in the interview, reiterated a pledge the firm made weeks earlier that it would not establish minimums for RIAs, that it would not charge RIAs custodial fees (unless they ask for them in exchange for some other benefit to the firm), and that it would offer them “best-in-breed” technology taking from the best of both TDAI and Schwab.

This group of advisors is “half the firm’s assets, and a third of its revenues,” said Clark. “We’d be foolish not to continue to grow this.” 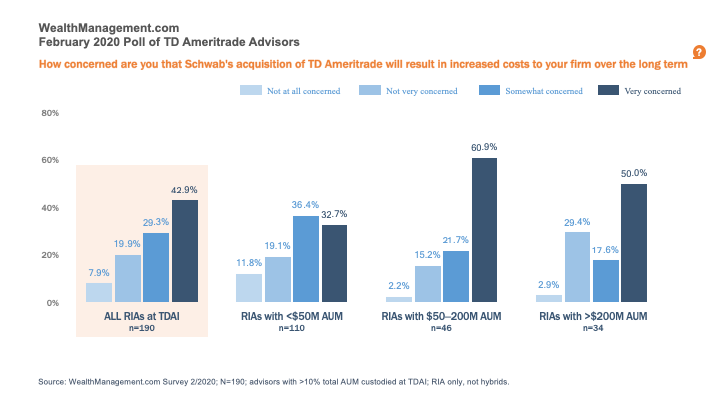 The “open architecture” of TDAI’s technology platform is seen as a boon to small advisors who want to run fast and nimble technology stacks. Clark said he disagrees with the notion that Schwab was completely integrated without any ability to integrate third-party platforms.

“There may be few more or tens more APIs that TD has, but not that many. You’d be surprised,” he said about Schwab’s integration abilities. “We believe in buy, build, or borrow.”

Clark told Wealthmanagement.com that Schwab and TDAI have been meeting for the past few weeks on plotting out the technology road map, and mentioned Schwab saw “opportunities” in TDAI’s options trading platform and its rebalancing tool, iRebal, as particularly interesting features.

Hitting on the topic of the Department of Justice taking a closer look at the proposed merger and how it might affect competition in the custodial space, both Clark and Bradley said there was no shortage of competition in wealth management given the recent moves by banks, independent broker/dealers and even the wirehouses.

Of the $30 trillion advisory market, Clark estimated Schwab’s custody service would have perhaps close to 10% after the integration with TD Ameritrade.

Bradley agreed the competition was greater than what was found between the dominant custodians. “We’d bang our heads trying to get advisors away from Schwab, and vice versa,” said Bradley referring to his days at TD, saying that once advisors were with a custodian, they were loath to move. The real competition came from “the wirehouses, the regionals, the IBDs,” he said.

It remains to be seen if TDAI advisors will leave the firm in the wake of the acquisition, or if Bradley and Clark can convince them they have the service model that works best for them.

If advisors did leave, the firm most likely to benefit is Fidelity, according to the WealthManagement.com survey.

When asked if they had to switch custodians today, 64% of advisors responded that they would consider Fidelity. This was followed by Pershing at 24% and E*Trade at 22%. The remaining choices received only single-digit percentages among respondents. 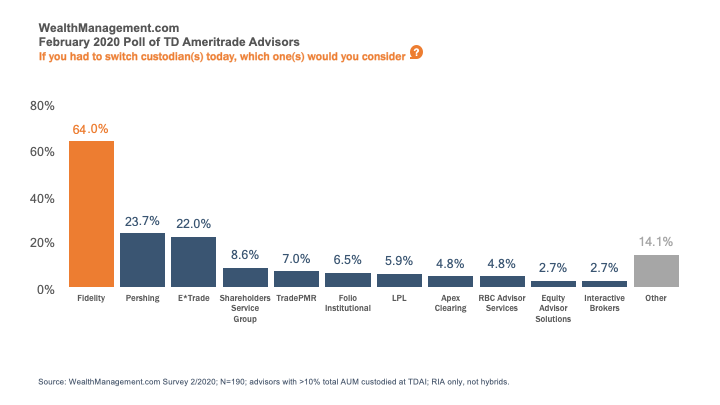 In terms of total AUM, the firms responding represented a fairly solid bell curve, with the largest percentage (36%) having from $51 million to $200 million under management.

When it came to assets held just at TDAI, 44% of advisors surveyed had less than $25 million held at TD Ameritrade; 24% were in the $51 million-to-$200 million range of holdings held there.

In his parting thoughts, Bradley reiterated Schwab's commitment to those advisors in the sub-$100 million AUM category.