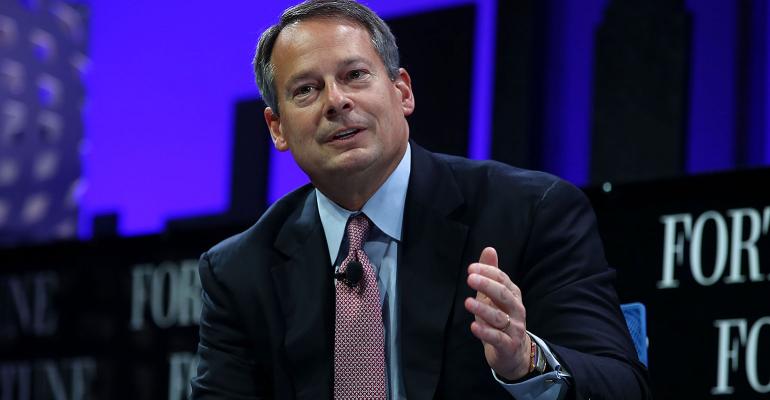 During a call with investors, CEO Walt Bettinger dismissed speculation that the firm is interested only in $1 billion-plus RIAs as 'inaccurate, naïve and inconsistent with everything that we have done for the last 25 or 30 years in the RIA space.'

On a business update call Tuesday with equity analysts and investors, Charles Schwab executives reiterated the firm’s commitment to serve registered investment sdvisors of all sizes, including smaller RIAs with under $100 million in assets under management.

“The speculation that we in some way, shape or form have a little or no interest in serving RIAs who might not be $1 billion-plus RIAs is inaccurate, naïve and inconsistent with everything that we have done for the last 25 or 30 years in the RIA space,” said CEO Walt Bettinger.

Schwab’s announcement last year that it would acquire competing custodian TD Ameritrade had many stakeholders and advisors questioning what the combined company would mean for smaller RIAs. TD Ameritrade is known to RIAs as an accommodating service provider; Schwab’s reputation is that it is not interested in smaller firms. Smaller RIAs have voiced concern they will be left out in the cold in the wake of the acquisition, potentially seeing service levels to the firm drop dramatically.

But head of Schwab Advisor Services Bernie Clark said the sub-$100 million RIA is a “sweet spot” as it has been since the beginning of the RIA custody business. And there’s no question that this group is getting great service, he added.

Schwab executives also shot down speculation that pricing models would change for RIAs. Some industry observers have said the acquisition of TD could lead Schwab to start charging a basis point fee for custody services, which have traditionally been paid for through cash balances, order flow, transaction fees and 12b-1 fees, many of which are disappearing as sources of revenue.

Clark said the firm has no intention of raising fees on any advisors, small or large.

“We don't want to change the economic relationship we have with [RIAs] by instituting some other kind of different fee unless of course, as always, for some reason their voice tells us they'd like to do something differently,” Clark said.

Bettinger said he was seeing more competition from integrated banks offering wealth management services in the traditional RIA space to have access to the same services. "It's essential that the RIAs have access to lending products through us that are on par with the lending capabilities that the firms—the organizations that we are competing with—might be able to offer these affluent investors," he said.

Combined with commission free trading, Bettinger is bullish on the future of fractional share trading and direct indexing, services that will likely be rolled out to the DIY investor market before they are on the institutional side. With fractional shares and commission-free trades, "all those things play together toward direct indexing, playing a meaningful role in the future for investors of all sizes as well as we all know the benefits of being able to customize and include certain areas, exclude certain areas. That's a powerful model I think for the future."

One change that will likely come about as a result of the integration is a greater reliance on APIs in the custody business; Schwab will bring TD’s APIs into the fold, Clark said.

Last week at TD Ameritrade Institutional’s national conference, President Tom Nally said it's business as usual, and there is still much they don't know about future integrations. One sticking point was put to rest: Nally assured advisors that in the vast majority of cases, client accounts would not have to be repapered—a costly, time-consuming and disruptive process—in a transition to the new custodian. Bettinger reiterated the same point on his call Tuesday.

Another trend Bettinger noticed is competitors writing checks to move client assets to a platform, and while he considered the practice "uneconomical" and "distasteful," he felt Schwab likely had no other choice but to follow suit to try to keep the practice from becoming more widespread.

“A fascinating area in our industry is the willingness of firms to write checks to provide cash to clients to move their dollars,” Bettinger said. “I suppose it's the ultimate form of direct marketing. But what's interesting is that although this has been a fairly widespread approach in recent years, the intensity of it in the last three or four quarters has been quite dramatic.”