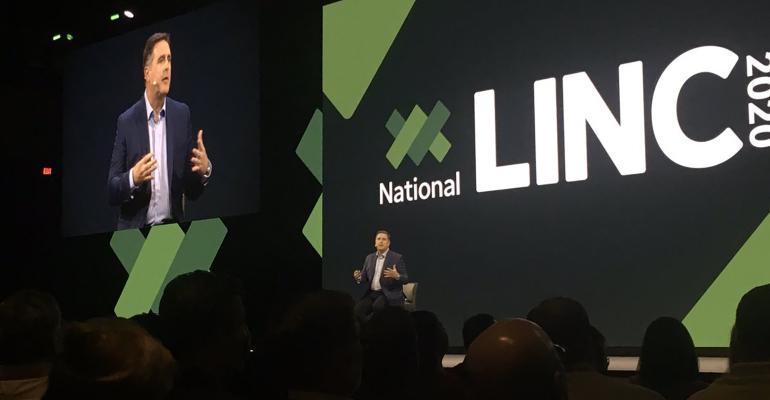 More Questions Than Answers at TDAI

Tom Nally tells advisors gathered for the firm’s national conference it’s business as usual, even as the DOJ signals more scrutiny of the proposed acquisition by rival Charles Schwab.

TD Ameritrade Institutional President Tom Nally told some 3,000 advisors gathered at what may be the custodian’s final national conference that the firm’s $26 billion acquisition by rival Charles Schwab could be delayed as Department of Justice antitrust regulators have requested additional information about the merger’s impact in the marketplace.

But for now, Nally said, it's business as usual, and there is still much they don't know about future integrations. One sticking point was put to rest: Nally assured advisors that in the vast majority of cases, client accounts would not have to be repapered—a costly, time-consuming and disruptive process—in a transition to the new custodian.

“We don’t want this to cloud your professional development,” he said. “We are not slowing down. We’re not taking our foot off the gas pedal.”

Nally said it may be two to three years before any integration would be complete, and the firm would likely set up a portal to keep advisors aware of developments “on a granular level.” In the meantime, he said, conference planners would start working on next year’s event with the assumption it will still take place.

But the additional news of a "second request" from antitrust regulators heightened the uncertainty both advisors and vendors have about the future of TDAI. Numbers from Cerulli Associates suggest Schwab could own slightly more than 50% of the RIA custodial market if the merger goes through. While few think the request means the deal is in trouble, they are rare. Regulators demanded the additional scrutiny in only 2% of the 2,111 transactions announced in 2018, according to the FTC.

One advisor attending the conference who did not want to be identified said he had personally gotten a call from the Department of Justice, asking questions about the industry and the market.

Few, however, think the additional scrutiny will derail the eventual acquisition. For many advisors at the conference, the biggest concern was the future of TD Ameritrade’s technology platform, VEO One. TD Ameritrade is known in the custodial space for letting smaller technology startups get a foothold in the financial advisory industry, accelerating the growth of the smaller RIAs who custody with the firm. Firms with large presences in the industry, like Oranj and FinMason, got off the ground with early integrations at TDAI.

“We like the open technology,” said Mark Bain, founder of the $100 million AUM Bain Wealth Management in Salem, Ore. “What happens to all that? You can’t get that at Schwab. It’s a step back.” If Schwab doesn’t make the transition work and preserve that access to innovative tech firms, “we absolutely are going to look at other options,” he said.

"The VEO ecosystem has fostered a tremendous amount of innovation and helped dozens of technology firms get their start in the RIA space," said Joel Bruckenstein, a technology consultant and owner of the T3 technology conferece. Many of those firms would not have gotten the attention at Schwab or Fidelity, he said.

Many advisors said they worry less about Schwab specifically, but generally more about the dwindling competition in the custodial space and the impact that will have on pricing and service. “I’ve never seen a situation where less competition is good for the market,” said Dave Barton, head of M&A for $19 billion AUM Mercer Advisors.

“The biggest issue post-merger is the culture of the business,” said Scott Hanson, co-founder and principal of Allworth Financial, an $8 billion AUM firm with 209 employees. “If they want to be successful, they’ll do everything they can for the TD advisors. But we’re not worried. Keep the clients happy. That’s the main thing.”