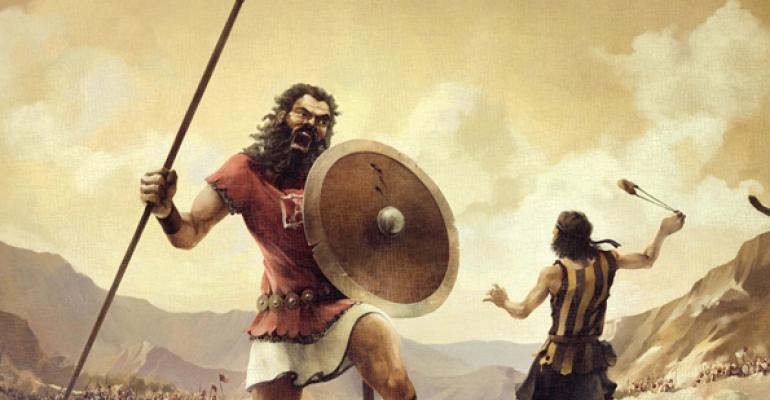 'I’ve gone through several mergers in the financial services industry, and I want to be prepared for what the options could be,' said Sam Dedio, an RIA managing $7 million in client assets.

There’s strength in numbers. And when going up against a mega firm with $5 trillion in assets, economies of scale couldn’t hurt. That’s the idea behind a new LinkedIn group for small RIA firms (those with less than $25 million in assets) that custody with TD Ameritrade.

Sam Dedio, founder, managing partner and chief investment officer of Patrumin Investors, a small registered investment advisor in Naples, Fla., decided to launch the group last week, after hearing that Charles Schwab penned a deal to acquire his custodian, TD Ameritrade, creating a new titan in the RIA custody space. While Schwab made a decision several years ago to focus on larger RIAs, TD Ameritrade has continued to service and attract smaller advisors.

“The greatest question facing RIAs after this merger is, will the new Schwab have room for smaller RIAs? Nobody is clear on that yet,” said Aaron Klein, CEO of Riskalyze, a financial technology company.

“How small clients like we are treated is really going to be low down on the totem pole,” said Dedio, who manages about $7 million in assets. “I’ve gone through several mergers in the financial services industry, and I want to be prepared for what the options could be.”

Schwab recently moved to cut all access to individual relationship managers for RIAs custodying less than $200 million, according to Will Trout, head of wealth management at Celent.

"Schwab’s support of and commitment to independent advisors of all sizes, including small firms, is longstanding and unwavering," said Rob Farmer, Schwab spokesman.

"Once the deal closes, the integration process will begin with a focus on enhancing the client experience by identifying the best capabilities from both firms," said Joe Giannone, spokesman for TD Ameritrade Institutional. "Discussing the merits of our platforms, service models, and client value propositions will be part of that process, but there is a long way to go before we get to those decisions. For now it’s business as usual, and TD Ameritrade Institutional remains committed to providing independent RIAs with the standard of care they expect from us as their custodian. More specific details will be shared later, after integration planning gets underway."

There are already a few communities out there catering to small, independent advisors, such as the XY Planning Network, whose members custody primarily with TD, and the Advisor Growth Community.

While Dedio’s group currently has about 10 members, he hopes to grow that to create some economies of scale, or a loose network, so to speak. The idea is that if several small RIAs band together, they could approach other custodians, who may even have rejected these RIAs previously for being too small, as a group, making their business more attractive. Fidelity, Pershing and TradePMR are some of the options Dedio and the group members are considering. (Dedio doesn’t consider E*Trade an option because of the fear the firm may be acquired.)

“You get $50 million from eight clients or whatever the number is—that’s a little more interesting to some firms, especially mid-sized firms, like TradePMR,” he said.

When Dedio launched his firm in 2015, he originally sought to custody at Schwab, but the firm said he was too small.

“There’s going to be some line, and we didn’t make the line before,” he said. “I’m worried about making that cut again. And I don’t want to have to scramble at the last minute to find a custody firm.”

The purpose of Dedio’s group is also to share communications, insights and ideas advisors receive regarding the combined firm.

“TD’s going to learn what the strategic initiatives are at Schwab, and we’ll get that data on whether there’s going to be a cut or not before they send a formal letter or notification,” he said.

Whether Schwab decides to service RIAs under $25 million or not, advisors at TD will have to repaper their clients next year, something most advisors don’t like to do because some clients may take it as an opportunity to reconsider the relationship.

“[Your clients] could be happy; they could be in a middle of a conversation with another advisor and have other money with them,” Dedio said. “Catch somebody at the wrong time and they’re vulnerable to switching out even though you did nothing wrong. It’s a tipping point of signing papers again.”

Some industry observers expect the acquisition to lead Schwab to start charging a basis point fee for custody services, which have traditionally been paid for through cash balances, order flow, transaction fees and 12b-1 fees, many of which are disappearing as sources of revenue.

And perhaps the hardest hit by a basis point custody fee will be smaller advisors. Dedio said if he had to pay a 5 basis point fee, for instance, that wouldn’t be a big deal. He sees it as a service, one he’s currently not paying for, so he would not mind paying a nominal fee. “To me it would be worth it to not have to do repapering.”

But if the firm started charging, say, 20 basis points for custody services, he would then look for alternatives.