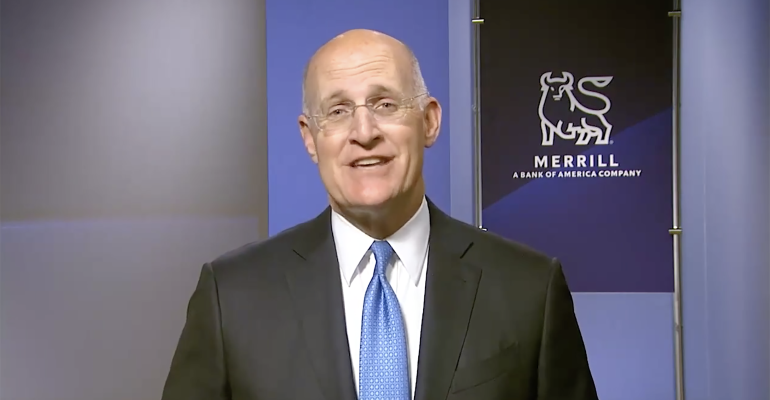 Andy Sieg, president of Merrill Lynch Wealth Management, is optimistic about the immediate future, despite the lasting toll of the coronavirus pandemic. Sieg told attendees at the Securities Industry and Financial Markets Association’s Private Client Virtual Conference: “The best is yet to come” for wealth management.

“As the pandemic ebbs, I believe there’s some serious reasons to be optimistic about the decade ahead,” said Sieg.

He pointed to the economic recovery as one major factor. In addition, the continued reopening of offices around the country is a sign of a potential return to normalcy.

The lion’s share of Bank of America Merrill Lynch employees continues to work from home, but the company has allowed some advisors and their teams back in the office. Sieg said the company expects more returnees in the next few weeks.

“Getting back, I’m convinced, is going to spark the face-to-face connectedness. Ideas will flourish and so will business,” he said.

Another reason for optimism, according to Sieg, is personal financial wealth creation potentially growing from the $226 trillion it sits at currently, according to Boston Consulting Group’s Global Wealth report, to a projected $280-plus trillion by 2025. He expects women and people of color to fare well during this period.

“Over the past six years affluence in the U.S. has increased by more than 55%, and Black/African American communities now represent $1.3 trillion in buying power; Hispanics and Latinos: $1.5 trillion; and women: more than $11 trillion,” Sieg said.

The much ballyhooed Great Wealth Transfer that's set to occur over the next two decades and the increase in remote work, allowing individuals and families to move away from job opportunity hot spots found in major metropolitan areas, are major factors that will work in these groups' favor, he added.

In 2018, Sieg told Barron’s that the industry has entered “an unpreceded bull market for advice.” Today, he still holds that to be true, as the desire for quality advice for a low fee continues to grow. The uptick in the number of employers who are offering financial wellness programs through benefit plans and financial education has only served to intensify this demand.

“The war for talent incentivizes employers to do all they can to help workers better handle money, set goals, reduce risk and build wealth and will do so in part through access to trusted sources of advice,” he said.

Sieg believes digital technology also has an important role to play. The pandemic showed Bank of America Merrill Lynch that clients of all ages are willing to engage digitally. Sieg and his team had expected the industry to reach a higher level of digital engagement within five or so years, but the pandemic accelerated that timeline drastically. Now, advisors and clients have adopted digital ways of connecting.

Sieg brought up the fiduciary standard as yet another reason for his rosy outlook, saying “we’ve got to keep the bad actors out of our profession” and that the fiduciary approach is in everyone’s interest.

Finally, he echoed his thoughts from earlier in the week, when he announced Merrill’s new advisor development program, which includes a ban on cold-calling and a shorter program completion period.

“We aim to double the success rate of the advisors just starting out and to increase the diversity among its ranks. It’s both a moral and a commercial imperative,” Sieg said. “I suspect many other firms are or will soon be doing the same, and I commend you.”