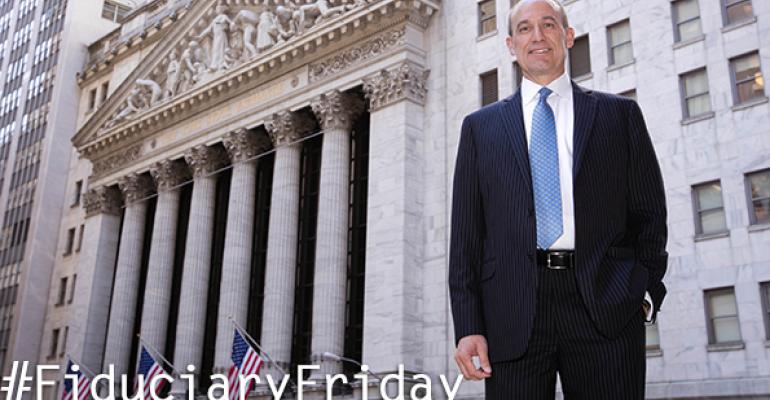 Kitces Calls Out FPA for Electing Industry Rep as President

The co-founder of XYPN Network worries that Skip Schweiss' dual roles at the Financial Planning Association and TD Ameritrade are a conflict, given the entities' diverging advocacy aims and financial ties.

In 2021, TD Ameritrade Trust Company President Skip Schweiss will take the reins as president of the Financial Planning Association, the advocacy organization for financial planning professionals. Lauded as a supporter of a fiduciary duty for advisors and an organizational leader, Schweiss will follow 2020 President Martin Seay.

But XYPN Co-founder and industry leader Michael Kitces raised concerns about the announcement in a post on his site, citing the "unavoidable" conflicts of interest that would arise between a corporate representative and the stated aims of the association. Chief among them was the fact that the FPA’s advocacy for a uniform fiduciary standard could conflict with the positions held by the Schweiss' employer. The company's lobbying efforts have pushed against creating a uniform standard between brokers and registered investment advisors, according to Kitces, who points out that TD Ameritrade is also one of the FPA’s most significant financial backers of the past 10 years.

“And now TD Ameritrade, having spent a decade being FPA’s largest sponsor writing the biggest checks, has one of its company representatives as the future President of the FPA in a position to directly influence FPA’s advocacy efforts that have been opposing TD Ameritrade business interests,” Kitces wrote on his site.

Congratulations are in order! @Schweiss_TDA was announced as the 2020 President elect for @fpassociation today at #FPACONF19.

They couldn’t have selected a better person for the job. pic.twitter.com/9Ipxv2BxGX

“Skip is an extraordinarily skilled leader with unquestionable character and integrity who has been an unwavering supporter and advocate of the financial planning profession, the CFP marks and an unambiguous fiduciary standard of care,” the spokesperson said. “He is an exceptional leadership choice for FPA.”

Schweiss, who will be the FPA’s 22nd president, joined TD Ameritrade in 2008, after 20 years with Fiserv Investment Support Services, and was elected to the FPA’s Board of Directors in Sept. 2016. In July, the FPA finalized a major restructuring plan that had gone through several revisions after chapter leaders worried about how their autonomy over local matters would be hindered.

Kitces also expressed surprise that for the first time in the FPA’s 20-year history, the National Board will not be led by someone who holds the certification from the Certified Financial Planner Board, though the FPA touts its status as being the “principal membership organization” for CFP professionals.

The association has weathered declining membership in recent years, even as the number of CFP holders has increased. Kitces wrote that he was worried that FPA’s recently announced moves (including electing four new board members, only two of which are CFP professionals) would cause a disconnect between rank-and-file FPA members and leadership.

Kitces' XYPN network of financial planners is the only sizable industry organization to try and stop the implementation of REG BI in court, maintaining that it weakens the standards for RIAs and does not go far enough in drawing distinctions between true fiduciaries and transactional brokers. The FPA, Kitces notes, has not taken that stand, though they would be in the best position to challenge the SEC over the regulation, nor have the advisor custodians, including TD Ameritrade Institutional.

Don Trone, a fiduciary advocate and CEO of 3ethos, said he understood why the perceived conflict may raise red flags among FPA members, but said Schweiss was a good candidate to sharpen the focus of the organization, and would no doubt recuse himself from any FPA decisions that conflicted with his professional obligations.

"The FPA has long been treated like the squire, or handmaiden, to the CFP Board," he said. "If there’s a real possibility of a confrontation with the CFP Board over its fiduciary standard, Skip can lead the fight, he has a good handle on fiduciary issues."

Kitces contends that there should be other leaders who could wage that fight without the baggage that Schweiss brings to the role.

“Is Skip Schweiss really ready to get fired from TD Ameritrade if their next CEO decides to prioritize its retail division over its institutional division and advocates against a fiduciary rule that the FPA is trying to support, and pushes Skip to get FPA to change its tune?” Kitces asked. “How exactly is Skip—or ANYONE—supposed to maintain their objectivity in a position of FPA leadership with that kind of conflict of interest looming over their head, with their job on the line?”

Schweiss brings leadership chops to the organization, Kitces concedes. "But that doesn't mean it's a good idea to put a highly conflicted vendor executive into the highest position of influence in an association that lobbies against his parent company's corporate interests. It has nothing to do with Skip personally. That's an untenable position for anyone," Kitces wrote on his blog. The "FPA has a Conflict of Interest policy for a reason. That they unfortunately chose to ignore. And there's no 'exception for nice guys' exclusion."