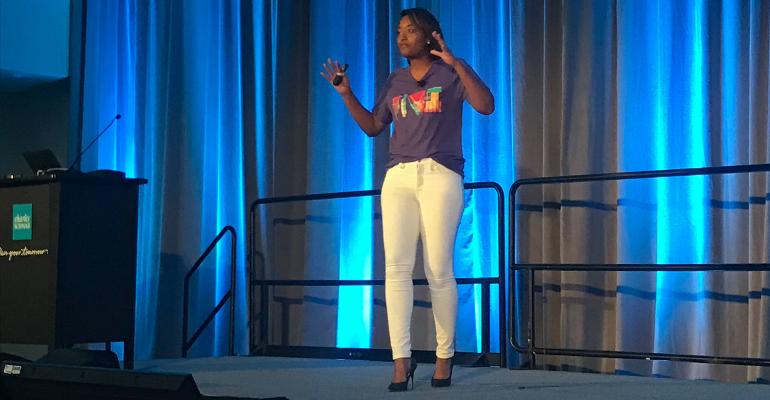 The Industry Has Responsibility (and Opportunity) to Help Close Wealth Gap

Firms may be cognizant that the wealth gap is an issue, but may feel they don't have the tools or language to respond, said Chloe McKenzie, CEO of On a Wealth Kick, speaking at Schwab IMPACT.

Financial advisors can play a significant role in addressing the country’s wealth gap by changing their own practices to assist communities traditionally ignored by the industry, said Chloe McKenzie, a wealth literacy advocate and the founder and CEO of On a Wealth Kick. She said the way the industry understood wealth made it difficult for firms to work with those who have been underserved in the past.

“We’re not in a time anymore where our industry has to serve the same individuals that it has,” she said, speaking at the annual Schwab IMPACT conference in San Diego this week. “Do we need to from the bottom line perspective? I know that’s what we’re going to face. But we also know we can continue to reframe our business models to do both.”

McKenzie discussed her career shift from a securities trader on Wall Street to her work as an advocate for wealth literacy and a consultant to help financial advisors address the wealth gap. With On a Wealth Kick, McKenzie advises institutions on how to improve wealth literacy and create more inclusionary practices; she also founded BlackFem, which works with school districts to implement culturally responsive financial literacy programs for students as young as 3-K; the curricula is used in more than 50 schools in 12 states.

McKenzie said these educational programs could instill an early understanding of the value of wealth accumulation (her 3-year-olds may pronounce liabilities as ‘liabilibities,’ she said, but they grasp that liabilities will decrease their net worth). Financial advisors need to understand their role in expanding opportunities for underserved communities, particularly those in low-income communities or communities of color.

“With my consulting firm, I work with people like you in our industry to say we also have a role in closing the wealth gap, and we may not know what that is. I think we generally agree that it’s an issue, so I’m not going to be one of those people who come up here to say, ‘we don’t care.’ I don’t think that at all,” she said. “What I do think is we may not be able to be equipped to serve these populations because we don’t have the right form or framing of our business models to be able to do that.”

Wielding a playlist of popular songs to underscore her points, McKenzie said advisors need to question the narratives they’re offering potential clients and be cognizant of how they communicate. They also need to be willing to acknowledge the ways in which the industry’s business models aggravate, rather than ameliorate, the wealth gap. She encouraged firms to address shortcomings in their approach by cataloguing the privilege the firm’s business models project, in the way they may analyze themselves.

“You can take this exact same activity, and apply it to your business models, thinking about ‘who are you targeting?’” she said. “If you are targeting the ultra-high-net-worth, that’s okay, but part of the privilege is recognizing it and figuring out how else we can embed other pieces to our business model that would be more inclusive to those who don’t identify or are not at an ultra-high-net-worth descriptor.”

She recalled a fraught family situation when she was 12, when she petitioned a judge during her parents’ divorce proceedings to make sure her father would pay for her and her sister’s college education. She said that she subsequently developed a different understanding of wealth and what it could mean for all families.

“The reason I’m able to fight for wealth justice is because wealth put me here, and if we start to think about wealth in the context of that, and not in our software or spreadsheets, then we’re truly beginning to forge a path for individuals who are not like me, in the communities I serve, so they have an opportunity to escape their tragedies as well,” she said.