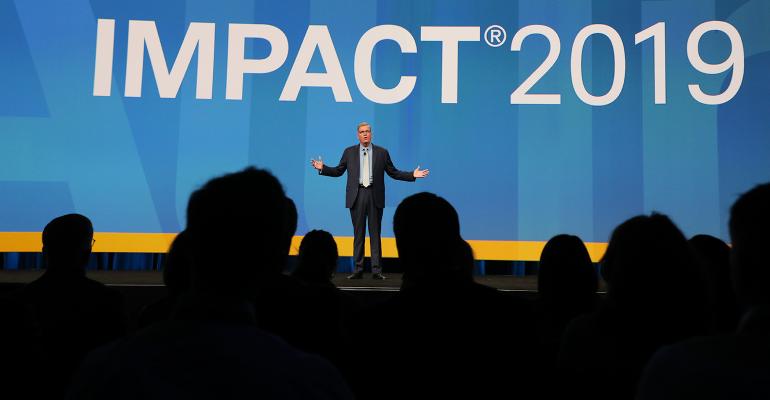 Beyond just managing assets, Schwab wants to make it easier for advisors to get in on advising about liabilities and making loans among other bank-like offerings

Schwab executives revealed plans Tuesday at Schwab's annual IMPACT conference to kick off the new decade by lowering barriers between the firm’s banking and wealth management businesses, “inviting” advisors to interact with clients’ liabilities, not just their assets. “We have gated your involvement in banking; we’re now inviting it. We want it to be a fully integrated experience for all of you,” said Bernard “Bernie” Clark, head of Schwab Advisor Services, addressing advisors in a morning keynote.

Clark wants advisors to make banking a bigger part of their business, thereby helping Schwab make banking a bigger part of its business. “We want to get into different types of lending,” he said, explaining that banking products could include client-facing “sophisticated mortgage lending” and “unsecured lending.” Clark even suggested Schwab could serve as a capital source for advisors, a hint that cast the conference commentary around capital-intensive topics like M&A in a different light.

But according to Schwab executives, the push into banking was a decision based on client demand. “It's only natural that more clients will want more synergies between what are their broker-dealer experiences and what are their banking experiences,” Clark said. “People want and need banking solutions and they like to have single relationships,” he continued. “Our intent is to continue to try and foster that integration of the advisors and their experiences, along with the banking experience. It’s something that we're working on right now.”

Schwab isn’t the only company making banking more accessible to advisors, but it is noticeably emphatic in framing the strategy in terms of consumer demand. “We're hearing from clients that it just would be easier if Schwab could address both sides of the balance sheet and not require an advisor to introduce another party—often a banking party that could be a competitor to the wealth management side,” echoed Andrew Salesky, head of advisor technology at Schwab. “Fortunately, we have a strong trust-based relationship with our clients, and they would prefer, assuming Schwab has a competitive offering, to be able to work with Schwab directly.”

"We've had some evolving thinking on this over the last couple years," admitted Walt Bettinger, CEO and president at Schwab. "We likely have not been as aggressive in the past as we feel now."

Will it be the kind of offer advisors who work with Schwab can’t refuse? As the reemphasis on banking at Schwab progresses, Clark promised to keep advisors up to date. “You’re going to be hearing lots more coming from this,” he said. It will be “the kind of banking that I think you’ll be able to embrace.”