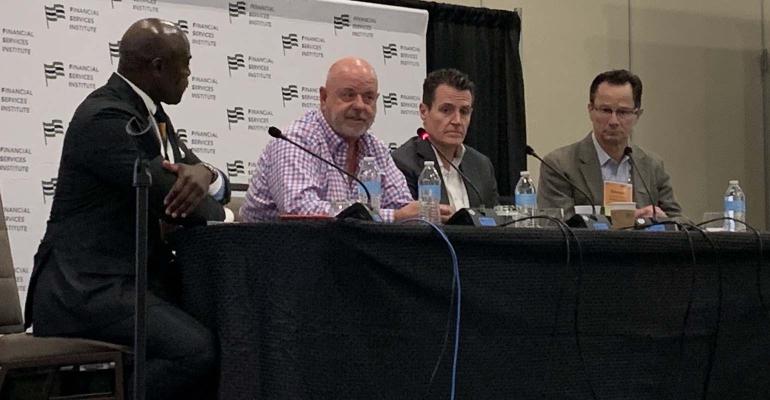 The broker/dealer business is starting to embrace different models and affiliation options.

There’s long been a bifurcation in the wealth management industry of commission-based brokers versus fee-only registered investment advisors and independent contractors versus employees. But as models are converging in the independent broker/dealer world, those lines are blurring.

Speaking at the Financial Services Institute’s OneVoice 2023 conference this week in Palm Desert, Calif. Larry Roth, managing partner at RLR Strategic Partners and executive chairman of Binah Capital Group, the firm that will be created from the merger between SPAC Kingswood Acquisition Corp. and Wentworth, said he has heard from a lot of firms that had a strong bias toward one business model or another but are now starting to offer all kinds of affiliations, such as hybrid or RIA-only units.

“Nobody fits nicely into these boxes anymore,” Roth said, speaking about the Cerulli slide. “You can, if you choose to, adjust your platform in a way that suits these migrating folks in the middle of the slide.”

“Some of the advisors I used to work with had this term they used, which I think is even more applicable now than before, and they said, ‘Well I really want to leave without leaving,’ which means, ‘I don’t want to go through the pain of migrating to a brand new platform,” Roth said. “Why can’t you adjust the platform to serve my needs and my clients’ needs and my ability over time to sell my business for a reasonable price, maybe not the highest price?”

Roth said most of the IBD firms in the room are already offering a wide variety of service models to advisors, so those will be net gainers.

“I believe that the large incumbents, many of whom are in this room at this event, are in a really great spot to keep what they have and to build affiliation options to not only keep what you have, but make it more profitable.”

Some IBDs, which have traditionally served independent contractors, are building out W2 employee channels. The conference had an entire panel dedicated to adding a W2 model. And the FSI has been advocating fiercely against the proposed DOL rule that could reclassify independent broker/dealer advisors as employees. A recent survey commissioned by FSI found that the rule could cause significant disruption to IBDs and their advisors.

Jim Gold, CEO of Steward Partners Global Advisory, said the lines are blurring between employees and independents. His firm, for instance, started as a W2 model and was built on attracting advisors out of the wirehouses.

“They went from their wirehouse branch to our branch, and they walk in and the lights are on and the coffee’s hot,” Gold said. “And if the printer’s broken, they come to the ops manager, and they fix it. So they’re really not independent.”

Unlike a wirehouse, the advisors own their book of business in writing, he said.

“That is the attribute that’s most important is who owns the client.”

Moore pointed to a team of advisors that PAG recently acquired, Albany Financial Group, that is now transitioning to a W2-like model.

“In our world, we don’t view them any differently than we did yesterday,” he said. “Someone who is a W2 employee on a headline basis can still be massively independent.”

THE TIME IS NOW. Learn more about this once in a lifetime bull market for advice at WealthManagement EDGE. #bullmarketforadvice