/sites/all/themes/penton_subtheme_wealthmanagement/images/logos/footer.png
Recent
Recent
New Research: Investing in Seniors Housing Properties—Opportunities and Challenges
Jul 01, 2022
12 Must Reads for the CRE Industry Today (July 1, 2022)
Jun 30, 2022
Reinventing the Advisor Workstation for a Digitized World
Jun 30, 2022
Can the U.S. Supply Chain Withstand New Disruptions?
Jun 30, 2022
Featured
The 10 Best and 10 Worst States in Which to Retire in 2021
Jul 15, 2021
Poll: 15 Classic Books on Investing and the Markets
Apr 03, 2020
Fifteen Must-Listen Business Podcasts for Advisors
Aug 14, 2020
Celebrity Estates: Jay Leno and Planning for Classic Car Collections
Feb 22, 2022
Ten to Watch
brought to you by 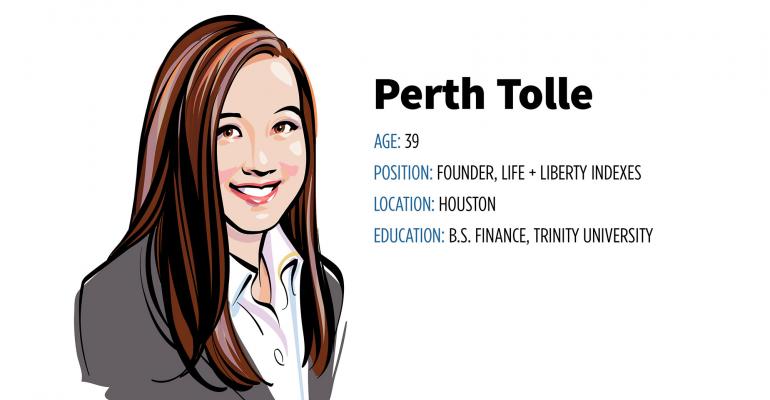 Perth Tolle was born in Beijing and moved to the United States at age 9. After college, she lived in Hong Kong for a year and travelled significantly in China. She found a stark disparity between what she’d seen as a child and her current situation.

“I saw the difference that freedom made,” she said. “Not only in my own life, but also on the markets in the United States and China.”

Afterward, she joined Fidelity Investments as a financial planner, working at branches in California and Texas. Tolle often had non-native clients, including some from Russia who were adamant that their investments not go toward their home country.

“People had a global outlook” that was very intuitive, given their experiences, she said. “They knew what they wanted and didn’t want.”

Most emerging-market indices are indiscriminate when it comes to non-financial factors like repressive governments. In fact, a market-weighted approach will heavily tilt toward Chinese stocks—China accounts for almost 32% of the MSCI Emerging Markets Index. Tolle’s ambition was to build an index that favored countries with higher personal, economic and democratic freedoms. Thus the Life + Liberty Indexes and the Life + Liberty Freedom 100 Emerging Markets Index were born.

“My investments are a form of expression of my values. I created this for people who have similar values of freedom to have a product that reflects what they want to put their investments toward,” she said. “Our premise is that freer countries grow more sustainably, recover faster from drawdowns, and use their human and economic capital more efficiently. You see that over and over in history.”

The challenge was how to quantify things like the health of a country’s free press, dedication to an independent judiciary or property rights. Tolle builds off a base created by the Fraser Institute’s Human Freedom Index, which scores every country across 79 categories. Of the 26 emerging-market countries, 10 make it onto Tolle’s index, with heavy tilts toward Taiwan, South Korea and Poland.

She approached Wes Gray and his team at Alpha Architect and convinced them their ETF platform could be white labelled, and they helped her launch the Freedom 100 Emerging Markets ETF. Tolle’s chief focus now is evangelizing for the fund—but there are future ideas on the whiteboard.

To be sure, excluding China means potentially losing some gains—at least until recently. Long term, Tolle bets exposure to countries that allow greater freedoms will lead to stronger economies and returns. Consider the current protests in Hong Kong putting pressure on China’s leaders. Tolle’s hope is the government will reconsider its policies and reap the economic benefits that come with human freedom.

“If they just let their people be free, imagine the growth you’d see in their country,” she said.