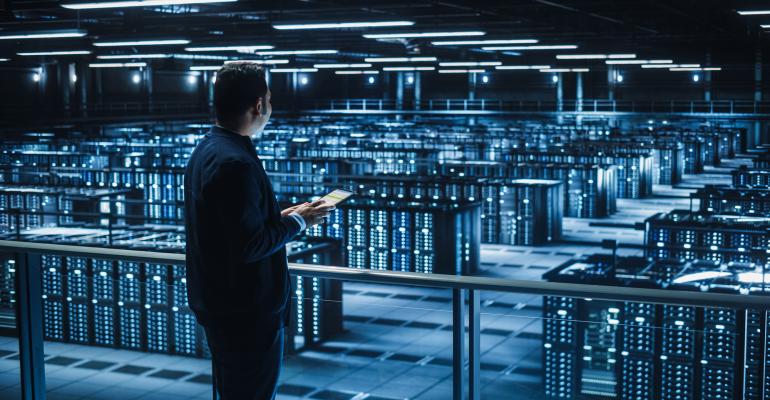 There Seems to be More Caution About Data Centers Lately. Is it Justified?

While the sector faces some unique challenges, including a shortage of power and competition for owners from their own tenants, its performance continues to be solid.

During the pandemic, data centers became one of the best performers for real estate investors because of the increased demand for web services. But concerns over available power supply for growth and competition from major cloud firms has generated concern about the sector’s outlook over the summer.

The issue was first raised in May by an article in Forbes calling data centers dinosaurs and singling out owners including Equinix and Digital Realty Trust.

In July, Dominion Energy announced it may not be able to meet power demands for data centers in Northern Virginia—the world’s No. 1 data center hub—for three to four years, putting at risk billions of dollars invested in these assets. The energy company said last month that it’s now making progress in addressing the supply of power to data centers.

Analysts say they see the challenges the data center industry faces when it comes to the power grid, and that’s prompting the pursuit of opportunities in other markets across the U.S. and abroad. But despite the power grid challenges and big cloud providers known as "hyperscalers" building their own facilities, analysts said they remain bullish on the sector as demand remains strong, supply is limited and rents continue to rise.

The North American data center market remains “red hot,” according to Josh Ruttner, senior research analyst, data center solutions, with real estate services firm CBRE. Demand for capacity more than tripled year-over-year in the first half of 2022, as companies continued to shift toward hybrid cloud environments in a post-pandemic world. Although large hyperscalers remain the biggest users of data center space, the market has seen a resurgence in enterprise demand.

“The first half of the year was record-breaking in terms of absorption,” Ruttner says. “The numbers are through the roof, with demand at an all-time high and rental rates that were in a downward trend starting to increase.”

Despite a 20 percent increase in wholesale colocation supply over the past year, in which companies can rent space for servers and computing hardware, developers can barely keep up with demand, according to Pat Lynch, executive managing director with CBRE's data center solutions. In primary markets in the first half of 2022, almost 75 percent of the 1,456.9 megawatts of under-construction capacity was already pre-leased. (The amount of new supply currently under construction nearly tripled year-over-year in the first half of the year, Lynch notes.)

In addition, looking at the most recent public earnings reports of the two large publicly-traded data center REITs, Equinix and Digital Realty Trust, both had strong second quarters, Lynch says.

“I think the industry is remaining resilient and that appears to be that way for the near term for sure. The biggest challenge I would say the industry is facing globally is availability of utility power.”

It’s been difficult for utility companies to accurately project the power draw that would be necessary for new data center developments, according to Raul Saavedra, executive vice president, data center advisory, with real estate services firm Colliers. It’s going to take collaboration of all parties involved in the business, from investors and operators to utility companies and state agencies, to deal with that kind of challenge, he says.

The power issue is present not only in Northern Virginia, but in Silicon Valley and elsewhere, and that’s prompting investors to seek out new markets with potentially cheaper power, Saavedra notes.

“It is the perfect storm,” he says. “It doesn’t appear the demand has dissipated thus far, but we are running out of product. Everyone is scrambling to find where there might be existing power and where they can build and make it work.”

Analysts say right now those areas include markets in other parts of Virginia and to the north, in Maryland.

During the first half of 2022, Northern Virginia posted 269.3 megawatts of data center absorption. Another 837 megawatts is currently under construction, according to CBRE.

On the other hand, the emerging market is Hillsboro, Ore., has 228.8 megawatts under construction after 37 megawatts was absorbed in the first half of 2022, CBRE reports.

“We have also seen growing demand in emerging markets in Latin America, Africa and Southeast Asia, where there’s still a tremendous amount of population that isn’t served by data centers,” says Jacob Albers, research manager with real estate services firm Cushman & Wakefield. “That is where we have seen a lot of interest, whether it’s players working on the colocation space or the hyperscale side to evaluate new markets to enter.”

That raises the question of competition between the big cloud companies and enterprise operations. Five companies are responsible for 80 percent of the absorption in the sector, according to Saavedra, and will only lease space from operators when they can’t build it themselves.

“If you’re trying to beat Amazon, Microsoft, and Google to a market and they beat you or get it up and running faster, they are not going to lease from you,” Saavedra says. “And if you don’t get them, people are saying, ‘Oh, my God, who am I going to lease to?’”

The good news is the cloud companies are competing against each other and need to be in those markets, he adds.

Large hyperscalers make up about 29 percent of the market share on the data centers they host themselves and that’s likely to grow to more than 40 percent by 2026, according to Albers. There's a lot of “hesitancy or negativity” surrounding the idea that a lot of the other players in the space might have limited options given that level of competition, but it can be overcome, he notes. “There are numerous opportunities both in core markets and secondary markets around the world for a lot of these colocation providers to enter into,” Albers says.

In addition, while it’s true the hyperscalers are increasingly building their own facilities, those same companies are still absorbing a significant amount of leased colocation space in major markets across the globe, according to Lynch.

“To imply because they’re building at scale that it’s going to eliminate the need for colocation, that’s simply not how the business is playing out,” he says.

Core markets for data centers have very tight supply and available turn-key inventory is limited to second- and third-generation space. End users are having a challenging time securing contiguous blocks of space and vacancy rates are trending toward an all-time low, analysts say.

In Northern Virginia, vacancy has fallen to 1.9 percent from 8.9 percent a year ago, according to CBRE data. Silicon Valley currently has a 1.2 percent vacancy rate at its data centers.

As a result, rental rates have increased by more than 20 percent since 2020, according to JLL data.

CBRE reports that the average monthly asking rate for a 250-to-500-kW requirement across primary markets rose by 5.9 percent year-year-year to $127.50 per kW. Saavedra says he’s seen rental increases of 10 percent to 15 percent over the past year and can see another 5 percent going forward as operators look to cover for inflation and higher costs of borrowing.

Going into 2023, there will likely be a lull in new supply coming on the market due to longer development timeframes, which has led to a continued push for hyperscale pre-leasing activity, Beardsley notes. As long as the economy remains in the current inflationary environment and the data center sector continues to experience robust demand, rental rates will continue to increase, he says.

Well-capitalized groups “are searching like crazy” for investment opportunities in the data center sector because a lot of money has been raised for deployment and there’s a need for “dots on the map” to execute those plans, according to Saavedra.

Among all the alternative real estate sectors tracked by data firm MSCI Real Assets, data centers posted the highest increase in investment sales volume in the first half of 2002, at $7.4 billion. The figure represents an increase of 370 percent year-over-year and more than double the average volume for the same period in the years 2017 through 2019. But those numbers were also skewed by one large entity-level deal that accounted for 75 percent of the total volume: the privatization of CyrusOne by KKR and Global Infrastructure Partners. Single-asset sales, meanwhile, declined by 19 percent year-over-year, according to MSCI Real Assets.

At the same time, while cap rates have increased across all commercial property sectors in 2022 as a result of rising interest rates, cap rates on data center transactions have not been impacted as heavily as those of other property types, due to strong property fundamentals and demand and proven resilience to economic turbulence, according to Beardsley.