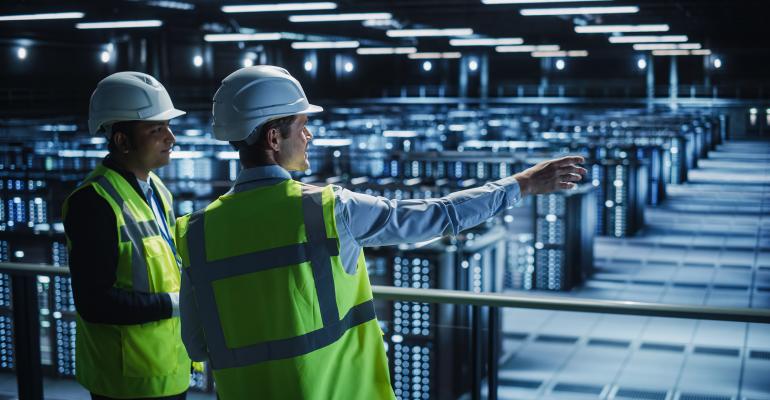 The pandemic accelerated the use of digital platforms and cloud services, generating a surge in data center development that is attracting tons of capital.

“The reliance on technology platforms over last 24 months is at an all-time high, creating demand for more data center space across the world,” says Phoenix-based Carl Beardsley, senior director with JLL Capital Markets, who notes that the big operators and users are responding by building-out data space and turning it over at a high velocity.

JLL tracks both colocation absorption and hyperscale development activity, according to Beardsley. In terms of absorption activity in the colocation space, the top five or six U.S. markets typically see 70 to 80 percent of all activity, he notes. These markets include Northern Virginia, Phoenix, Chicago, Santa Clara, Calif., Dallas, and the Pacific Northwest.

These top markets are all seeing a significant amount of new development, but in recent years both Phoenix and Hillsboro, Ore. experienced an increase in colocation development because they offer competitive tax benefits, low-cost power, relatively low land costs and a quick entitlement process, Beardsley says. These factors also are attracting public cloud users.

Data center developers are looking for additional capital to keep up with the added demand, and they aren’t disappointed, as data centers are currently among the hottest U.S. alternative real estate investment sectors, and a lot of investors are entering this market for the first time.

“Historically, data center capital markets were a mix of data center operators, infrastructure funds, data center REITS and investors that partner with preferred operators,” Beardsley notes. “Now, there is a large influx of institutional capital looking for higher-yield opportunities that performed well through the pandemic that are shifting attention from ‘core’ asset classes to this sector,” he says.

“There is a ton of money going into this sector,” adds Bond, noting other new entrants, including private equity funds, investment funds set up to specifically invest in data centers and sovereign wealth funds all have entered this market. There are also infrastructure funds that have switched from roads and bridges to data facilities and towers.

In fact, there is so much money going into big public data center REITs that they are consolidating and going private. Three of the largest data center REIT portfolio acquisitions ever occurred last year when CyrusOne, CoreSite Realty and QTS Realty were taken private. For example, Blackstone acquired QTS for $10 billion.

A surge in user demand over the last six to 12 months for large blocks of space is driving new development, with some users even taking whole buildings of 250,000 sq. ft. or more, Beardsley says. In fact, demand for single tenant data centers exceeds demand for multi-tenant space in some top markets like Northern Virginia, where 53 percent of users are seeking single-tenant centers.

“It can be difficult for users to forecast future IT loads, so these end users must ensure they are procuring enough space to continue to scale with business demands,” Beardsley says.

While hyperscalers lease a lot of data space from colocation operators, Bond says a huge acceleration in cloud-based services is also driving a surge in development by cloud companies. Beardsley notes that the top five hyperscalers are building out in primary markets, as well as areas not dominated by data center operators, such as Iowa, New Mexico, Nevada and Ohio. “These hyperscale users typically buy large land parcels—300-plus acres—and build out a campus with multiple buildings,” he adds, noting that they often require additional resources that can be difficult to obtain at urban in-fill sites.

“As use of cloud-based computing increases, hyperscalers will continue to build out in secondary and tertiary data center markets,” Beardsley says.

For example, Google Cloud plans to build new data centers in Nebraska, South Carolina, Virginia, Nevada and Texas, according to an announcement made by Alphabet and Google CEO Sundar Pichai last May. Apple will also begin construction this year on a $1.3 billion data center in Waukee, Iowa that has been on it drawing board since 2017, reported KCCI Des Moines. And Meta (Facebook) is building a new $800-million data center near Kuna, Idaho, to support its future metaverse, reported Data Center Frontier.

AWS is building data centers in new markets around the world, but its biggest play is right here at home. The tech giant plans to spend $35 billion to build four data centers with more than 1 million sq. ft. on an 80-acre site adjacent to the Manassas mall in Prince William County in Northern Virginia, according to DCD News. The company’s data center revenue increased by nearly 40 percent year-over-year in the third quarter of 2021 to $16.1 billion,

And Microsoft has unveiled an aggressive plan to build 50 to 100 new data centers across the U.S. and around the globe each year for the foreseeable future, reported CRN, as it expands its Microsoft Azure cloud offerings worldwide.