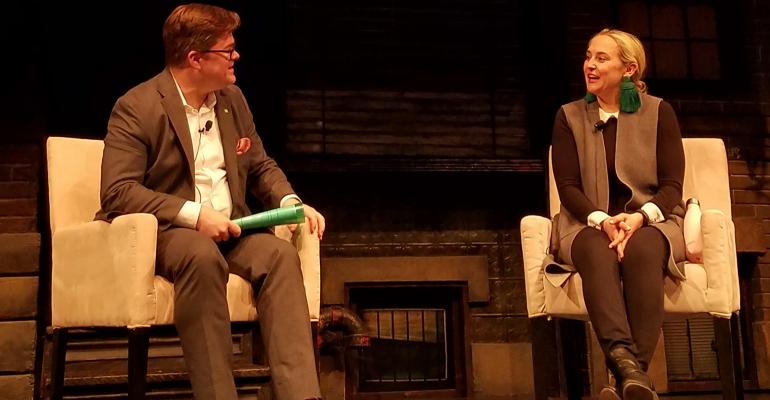 Fintech has become so integral to Americans' lives that it's no longer about finance, says Alexa von Tobel.

Alexa von Tobel hasn’t slowed down after leaving Northwestern Mutual in January. She’s raising $200 million for her venture fund, Inspired Capital; is publishing a book in May; and yesterday, just a few days after giving birth to a baby girl, gave a headline presentation to entrepreneurs attending a New York FinTech Week conference. Describing the future of fintech and financial services, von Tobel said she expected to see a “self-driving wallet” and blurred lines between fintech, regtech, wealthtech, insurtech and other areas that are seeing technological advancement quicken in the financial realm.

Before laying out her vision of the future, she provided more clarity on the companies in which Inspired Capital plans to invest. The fund has already made a $1 million investment in digital retirement platform Kindur, and is targeting late-seed stage and Series A investment opportunities. “We’re kind of a new species of venture fund. We’re calling ourselves a builders’ fund,” von Tobel explained.

The broad mandate is intentional. “I don’t think fintech is truly limited to just financial services,” she continued. “I think fintech is bleeding into all elements. Your phone is going to be the future bank for every person on the planet.”

That’s where the idea for a “self-driving wallet” came from: Most younger Americans are desirous of technology handling mundane tasks like paying bills and investing as painlessly and automatically as possible, she said. Once digital platforms, or smartwallets, are capable of handling those tasks, she added, entirely new marketing platforms, for example, will open up.

Von Tobel also addressed the entrance of “big tech” into the fintech space. “Amazon would be a great bank, if it wanted to be,” she said. It’s not about big companies snapping up small ones, it’s about fast companies snapping up the slow ones. She said that was part of the thinking behind Northwestern Mutual’s investment in, and eventual purchase of, LearnVest. It’s also the thinking behind Schwab’s recent bet on a subscription model for financial services, she noted.

As von Tobel continues to raise funds for Inspired Capital, she’s looking forward to the years ahead. “This is going to be one of the most fun decades for fintech,” she concluded.