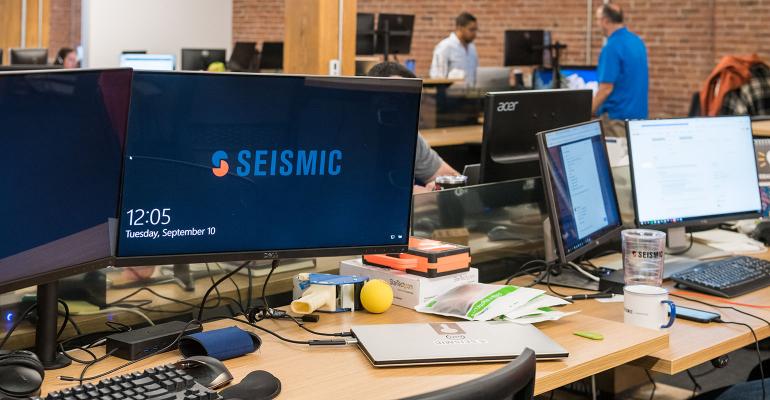 In Seismic's Acquisition of Grapevine6, a Look Ahead

The sales and marketing automation firm has acquired a competitor with a lead in social media automation.

Neither company is particularly large in terms of employee footprint—Seismic has several hundred, while Grapevine6 has right around 100—but each, in its own way, packs a large punch when it comes to enabling the sales and marketing process.

Now, the two are combining, with Seismic, a sales enablement and marketing orchestration platform provider (that is a mouthful) having announced its acquisition of Grapevine6, a social selling platform, this week.

While likely not a household name for the average registered investment advisor, Seismic has already built a reputation in the asset management industry where it started (but keep in mind the firm works with many different verticals and one of its largest customers, at least in March, was IBM).

The now combined company is one that both the RIA and independent broker/dealer channels should keep an eye on as the duo is going to be one of the key drivers of marketing and sales technology in the financial advice business.

The terms of the deal were not disclosed, but Grapevine6’s platform, once integrated with Seismic’s technology, will be known as Seismic LiveSocial.

It has been an eventful year for Seismic, both despite the pandemic and because of it. Largely due to the shift to remote work, the company saw a 148% increase in active users year over year during the first half of 2020. And in September, Seismic landed $92 million in Series F funding, some of it coming from Ameriprise Financial, a Seismic customer, as well as T. Rowe Price (a returning investor).

So What Does It All Do?

I bet a lot of advisors reading this are wondering, “What is sales enablement?”

While most wealth managers likely do not consider themselves salespeople these days, they do have to sell the potential in their work to prospects and do need to drive clients into products that will make up their portfolios.

As Seismic’s co-founder and CEO Doug Winter put it in September’s funding announcement: "We founded Seismic 10 years ago to enable marketing and sales teams to engage with prospective customers with the right content at the right time.”

The Seismic Storytelling Platform is used by marketing and sales staff to enable content planning and delivery that is, in turn, fairly simple for advisors to use and personalize in their outreach with clients. Content can be anything, PowerPoint presentations, PDFs, webpages, anything an advisor wants to use when engaging with a client (all of it already cleared by compliance).

It is also tightly integrated with Salesforce and the client or prospect data a firm houses there.

Advisors can present to clients from within Seismic, send what they just presented to them and in return get a page-by-page breakdown of what they spent their time on.

During a demo I received in March, the presenter gave the example of a hypothetical response of an advisor reviewing such an analysis: “Oh look, they skipped right over the three things I thought they’d be interested in and went right to the performance.” And this part of the platform's analytics tool set relies on Seismic’s own homegrown machine learning technology.

But that is just one facet. There are powerful macrolevel analytics too, whereby a firm can look at just what content was shared, what was most read by clients and which advisors’ efforts with the platform were most fruitful.

As one line in the acquisition announcement put it, the Grapevine6 acquisition is about “unifying social engagement and sales enablement.”

Seismic, through the acquisition, will now have access to the content pipes or feeds from 11,000 third-party publishers of content and match it up to relevant clients via the major social media networks, including Facebook, LinkedIn and Twitter. Some of the secret sauce baked in to Grapevine6 is the machine learning artificial intelligence engine it has developed since launching in 2013.

The combined platforms will end up being a key component of the marketing and communications tool kits at large firms (like those above) and enable them to more efficiently search for, find and share timely and compliant content that can be easily customized, personalized (for the receiving client) and more accurately targeted.

It is becoming increasingly challenging to compare marketing technology (commonly referred to as martech), whether a software as a service offering for marketing automation, sales enablement or even compliance.

The lines are continuing to blur as to which platform does what. Ten years ago, there were a plethora of social media monitoring and management platforms for the advice business, but several of those acquired each other. Two winners from that era are Hearsay Systems and Smarsh, though often they are thought of more on the compliance side, each has portions of its platforms dedicated to content analytics and tracking.

And over the past few years, there have been many new startups specific to the marketing automation efforts of independent advisors in the small- to midsize range and even larger firms, including, in no particular order, Broadridge, AdvisorStream, Vestorly, Snappy Kraken, Orion’s Market*r, Seven Group and eMoney’s marketing automation offering, among others. Also this week came the announcement that FMG Suite is acquiring competitor Twenty Over Ten in a bid to become an end-to-end automated marketing provider to advisors.

Over the coming year, we will try to tease out some of the differences and the strengths and weaknesses of each. And we will also keep advisors abreast of the cutting-edge developments from firms like Seismic that serve larger enterprise-size advisory firms.