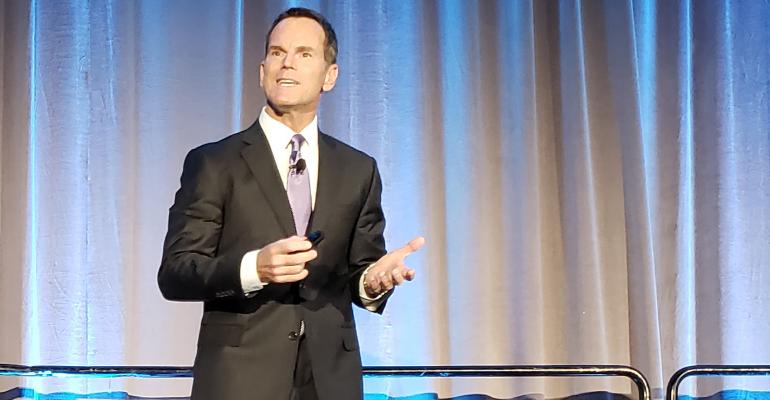 In plotting the demise of forms, Schwab is going beyond digitized paper and into fully digital processes.

If advisors were caught by surprise at the speed with which Charles Schwab dropped its trading fees to zero, they should be prepared for a slightly more measured pace when it comes to fully digital processes replacing forms at the firm. Those changes, along with lowering barriers between the firm’s banking and wealth management businesses and adding dozens of additional integrations, including a single sign-on to Schwab Alliance from third-party client portals, are in the works for the months ahead. The plans were revealed to advisors at Schwab IMPACT in a series of executive keynotes and breakout technology sessions on Tuesday.

If technologists at Charles Schwab get their way, 2020 will be the year digital processes largely replace the “digitized paper” forms that are still utilized by the financial services firm. The changes should render the “papering” part of “repapering” obsolete, among other improvements. Eventually the hope is to do away with even the concept of forms.

“We want to get to a place where you guys are not using forms,” said Gail Romano, digital product owner in Schwab’s custody tools division, addressing advisors. “We help you interpret the form because there's no form in front of you—there are questions in front of you that you're answering and that's going to guide you all the way through the process. Now, does this mean death to forms? Not today, but that's our North Star.”

Part of that process will be to sunset some tools and default advisors to newer tools. The Online Account Open tool, “a legacy capability that was built many, many, many years ago,” will eventually be discontinued, said William Pearson, another digital product owner in Schwab’s custody tools division. Instead, “in the next few months,” advisors should expect to see the digital account opening tool as the default onboarding tool, said Lauren Wilkinson, VP of digital advisor solutions at Schwab.

Technologists and executives attempting to eradicate forms at Schwab are encountering two problems in the endeavor: a “long tail” of little-used forms and the complexities of handling a greater number of actors with advisor-involved accounts, in comparison to straight-forward retail accounts.

To handle the first challenge, the firm is prioritizing digital development for the top 85% or so of the most common types of account openings, said Andrew Salesky, head of digital advisor solutions at the firm. The thought process is that once the heavy lifting is under digital control, the more nuanced situations can be addressed.

To that end, the firm’s batch-processing feature has been in the works since 2018, under development at the firm’s twin tech facilities in San Francisco and Austin, Texas. But there is an end in sight: “I will say, we will have it in the second half [of 2020],” said Salesky.

On the other front, while retail clients may have a seconds-long account opening process at a digital brokerage like Robinhood, advisors’ clients face a more complex process in their digital account opening procedure. That's because of the number of actors involved, said Pearson. Schwab is solving for situations in which an advisor, the advisor’s supervisor, the client, Schwab as custodian and maybe even an attorney, are all involved in an account opening. The end product, though it has taken longer to develop, should put Schwab at a “competitive advantage,” he explained. “We’re thinking about these multiple actors.”

Part of the difficulty of digital account opening comes down to security. To address that, Schwab requires that e-authorization occurs on its digital property, explained Salesky, which is why clients need to obtain Schwab Alliance credentials, even if they don’t tend to spend much time on that part of the firm’s ecosystem. Schwab Alliance is built on the same foundation as Schwab.com, but its functionality is reduced, compared to the retail version of the portal, and it tends to function as an alert center and portfolio snapshot for clients. (For those unfamiliar the Schwab Alliance site is a version of the Schwab.com website customized specifically for Schwab advisors and their clients of advisors---it can be customized with an advisory firm's branding, and there is more choice for advisors to choose what clients see, and more, among other features, including digital approve for everything from new accounts to money movement).

While Schwab doesn’t have plans to relinquish its e-authorization capabilities via Alliance, it is working on an integration with third-party portals that will facilitate a single sign-on, effectively making Alliance less of a hub and more of a spoke in the wealthtech ecosystem. “It's a hub for those clients that want to use it as their hub, for their end-clients, but it's not a requirement,” said Salesky. Schwab is even exploring creating a widget and modularizing the Alliance functionality, he added.

Besides facilitating smoother transitions in and out of Alliance, Schwab has over 80 direct integrations with third parties, said Kartik Srinivasan, digital product owner of the firm’s third-party integration division. In “the next few months,” the Schwab integration count will increase with more than 30 new providers, he added.