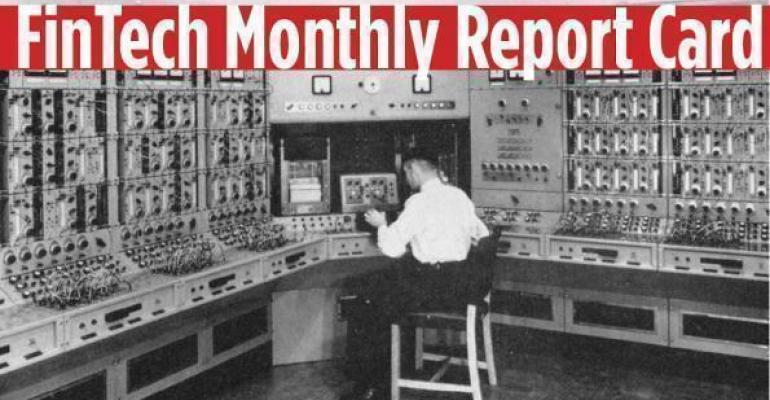 What happened: JPMorgan Chase is launching a digital investing service offering free or discounted trades, a portfolio-building tool, and no-fee access to the bank’s stock research. Anyone who downloads J.P. Morgan’s mobile banking app or uses its website can get at least 100 free trades in the first year. Forty-seven million people who already use the company’s banking app or website will have access to the new service, called You Invest. “There are customers out there who may not want to trust their credentials or their money to an app of the month,” said Jed Laskowitz in a CNBC story. Laskowitz is a J.P. Morgan veteran who runs You Invest. “We’re thinking about what’s right for our customers, helping them get invested, and stay invested and diversified,” he said.

Why it matters: This looks like the first fruit from JP’s digital effort helmed by Kelli Keough, a Schwab alum they brought in to shake things up and innovate. It’s a self-directed investing service, so I’m not sure if it’s a big threat to advisors, but it’s probably a huge threat to Wealthfront, Betterment and the like.

What happened:  The Treasury Department issued an endorsement of the fintech industry’s wish list, including a nationwide bank charter for fintechs, “regulatory sandboxes” to foster innovation, harmonized state licensing procedures, and national data breach notification laws. “American innovation is a cornerstone of a healthy U.S. economy. Creating a regulatory environment that supports responsible innovation is crucial for economic growth and success, particularly in the financial sector,” Treasury Secretary Steven T. Mnuchin said in a statement announcing the report.

Why it matters: There are four industries that tech hasn’t disrupted yet: financial services, education, healthcare, and government. If the incumbents or the startups are going to build great Google and Apple-esque services, we need the anachronistic regulatory frameworks and stubborn industry data standards to give way, but this is a good first step.

Titan Graduating from Y Combinator with Eyes on Affluent Millennials

What happened: Y Combinator startup, Titan, is looking to democratize investing in managed portfolios the way Robinhood did it for individual stocks. Titan’s mobile app lets anyone invest as little as $1,000 for just a 1 percent fee on assets while keeping all the profits. Titan picks the top 20 stocks based on data mined from the most prestigious hedge funds, then invests directly in those with personalized shorts based on the user’s risk profile. Titan has been the buzz of YC, with several partners already investing their own money through Titan, and the startup already has $10 million under management.

Why it matters: Good job on the PR, but if YC partners had moved all their personal money into the service, you’d have a heck of a lot more than $10 million. This is a tech service priced at the same level as human advisors, so by that measure it’s expensive, but they’re cleverly comparing it to hedge funds that charge 2 percent plus 20 percent of profits. Have they built a better hedge fund? If they have they might want to prepare for a bunch of advisors bringing them client assets but it’s definitely too early to tell.

What happened: Betterment’s new Smart Saver feature lets investors move extra cash sitting in checking and savings accounts into a selection of bonds—80 percent U.S. short-term Treasury bonds and 20 percent U.S. short-term investment bonds. Betterment projects the Smart Saver portfolio will yield 2 percent before it collects its management fee and roughly 1.8 percent after fees. The feature will also be available on the white-label version of the robo, Betterment for Advisors. (Editor’s note: Smart Saver accounts are investment accounts and not FDIC insured.)

Why it matters: I’m actually thrilled to give Betterment a thumbs-up on this. It’s a great move to deliver better returns on cash to their investors and an overall nice selling point.

What happened: BMO Harris announced two fintech partnerships: SpringFour and Genivity. The Chicago bank hopes this will be the first of many partnerships in its mission to create a digitally driven relationship bank for its customers. Springfour matches customers in financial distress with local, state and national resources that can help them find a job, obtain financial guidance, pay for utilities, and save money on child care, home repair and prescriptions. Genivity is an artificial intelligence software company whose algorithms predict how long clients are going to live and how healthy they’re going to be to help plan for retirement and future healthcare costs. Both of these partnerships are in pilot mode now, and there are plans to roll them out to more contact center agents, financial advisers and bankers. Genivity might also be integrated into the bank’s digital channels.

Why it matters: Springfour sounds interesting—giving resources to customers who need help is a big part of what a bank relationship should be. And on the one hand, we could see how Genivity data would be very interesting for a financial planner. On the other hand, if it says your client will die early, do you tell them not to buy the cheap bourbon? That being said, this could be interesting and worth watching to see if other banks decide to make similar partnerships.

What happened: Vestigo Ventures, a Boston-area venture firm that backs early-stage financial technology companies, has raised $58.9 million for its debut investment fund. The firm is part of a wave of at least 15 early-stage, tech-focused startup funds that have popped up in the Boston area since early 2015. In a press release, Vestigo said it has invested in eight companies so far, including Boston-based firms LifeYield, which makes money management software, and TowerIQ, an insurance software firm.

Why it matters: Mark Casady, who previously helmed LPL, and Ian Sheridan, who logged time at Mass Mutual, DST and Sungard, have rapidly become, in the form of Vestigo, one of the go-to firms for early-stage seed capital in fintech. (Disclosure: their portfolio company LifeYield recently announced their first integration with Riskalyze.) Interested to see what they invest in next.

What happened: Tally, a fully automated app that helps users overcome credit card debt, secured $42 million in funding and is launching Tally Advisor, which helps a user come up with a specific date for when they will be debt-free, based on the user’s income, spending, current balances and level of debt. It then adjusts if and when users encounter financial setbacks or have increased cash flow. The robo is a free feature for Tally users.

Why it matters: It’s not a great sign when an app you’ve never heard of adds a second line of business, and then gives it out for free. Best of luck being, like, the eighth startup to try this … you are going to need it.

What happened: Revolut announced Revolut Metal, a card that offers cash back in cryptocurrency on card purchases, a personal concierge, travel insurance and a higher £600 ($771.3) limit on free global ATM withdrawals per month, along with Revolut’s existing premium features. The metal (literally) bank card, comes at a cost: £12.99 ($16.69) per month or £120 ($154.2) for the year. Metal’s cash back starts at 0.1 percent for card transactions made in Europe and 1 percent for payments made outside Europe, with cash back paid in any of Revolut’s 25 fiat currencies or five cryptocurrencies.

Why it matters: Finally, a crypto product you can use to buy something without converting to actual currency first. Revolut is trying to make cryptocurrency great, even if it’s just in the form of cash back. But will the high monthly costs and cash back simply cancel each other out? Not sure this will make sense for a lot of consumers.

What happened: The U.S. Securities and Exchange Commission rejected applications for nine bitcoin-based exchange traded funds from three separate companies, suggesting they were not yet convinced that the products would not be subject to fraud or manipulation. Soon after, the SEC’s four commissioners said they would review those decisions.

Why it matters: While it’s no secret that I have mixed feelings on what the future of crypto will look like, it’s still an asset class that has millions of investors. Blocking ETF investors from exposure can only happen for so long, and in true SEC fashion, they’re already reviewing the decision. Just tear off the band-aid and let investors decide for themselves.