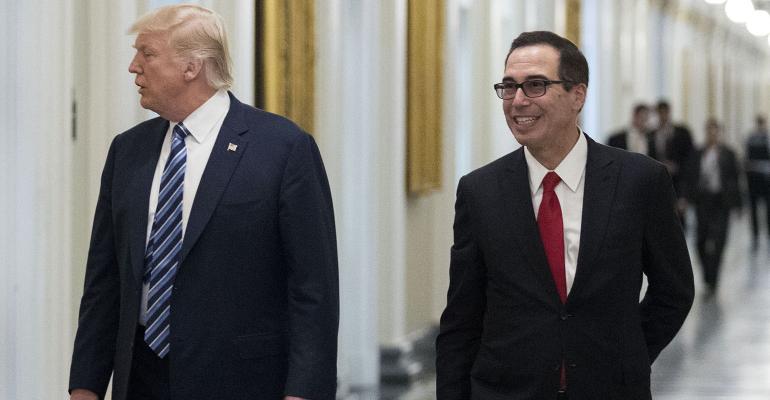 Aggregated data today is far more robust than a table of transactions or the odd portfolio report. Information funneled between fintech firms, custodians, advisor portals, banks, server storage centers, even mobile phones, with powers systems that turn data into cues for when an advisor should reach out to a client provide financial context to voicebots like Amazon’s Alexa and are fueling speculation about the role of artificial intelligence in financial services.

In the Treasury Department’s recent fintech-focused report, one of the statements likely to have an impact on financial advisors is its interpretation of a few disputed lines in Section 1033 of the Dodd-Frank Act. In essence, the report addresses conflicting viewpoints around who is allowed access to certain financial data: an end-customer, narrowly defined; or companies, like data aggregators that are acting with the explicit permission of an end-customer.

The Treasury Department concluded that the broader interpretation is more appropriate, arguing that a narrow reading of Section 1033 would “do little to advance consumer interests by eliminating many of the benefits they derive from data aggregation and the innovations that flow through from fintech applications.”

This government interpretation caught Brandon Dewitt, CTO and co-founder of data aggregator MX, by surprise. “Getting the tangible recommendations is phenomenal,” he said. “That is quite bold to take something from being a discussion about ‘guidances’ all the way to ‘it should impact federal law,’ which is a heck of a leap.”

That’s just one of the nuggets from the 222-page fintech report, completed at the request of President Trump. It took only hours before the fintech industry felt its impact.

For wealth managers, the Treasury report and its recommendations will play out across the coming months and years. Recognizing the importance of data, the Treasury Department focused on information pipelines and their operators—data aggregators—providing clarity on existing rules and lending institutional encouragement to financial advisory innovators.

The Treasury’s aggregator-friendly approach should encourage financial advisors, said Lowell Putnam, CEO of Quovo, the data aggregator behind robo-advisors Betterment and Wealthfront and one of the founders of the Secure Open Data Access principles. The data sharing that’s happened for years between custodians, advisors and financial planning or portfolio management products has benefited all parties, he said. He believes any secure expansion of data sharing as a result of the Treasury report will further benefit advisors and clients.

“It’s so valuable for an advisor to be able to view a customer’s holistic financial picture,” explained Putnam. “I hope that advisors are going to be able to use some of the takeaways from the Treasury report to make their customers, their clients, feel more comfortable around data sharing, because it’s being done safely and securely.”

Anil Arora, CEO of another SODA member, Envestnet’s Yodlee, thinks the Treasury report will help advisors grow their book of business by giving advisors an opportunity to discuss the entirety of a clients’ assets. “In our system, we see that the primary financial institution typically has less than 50 percent of an average client’s assets and liabilities,” said Arora. “How do I give you good planning and advice without really understanding what’s going on?”

“This is an outstanding development because Treasury has come in and said, ‘Yep, this is an important core principle and we need to make sure that we nurture it and build the right framework, so that we can create the innovation and the benefits that have already come to bear in the marketplace,’” Arora explained.

It shouldn’t surprise advisors that data aggregators are so excited about the report, said R.A. Farrokhnia, a Columbia Business School professor who focuses on financial technology. “It’s a race to collect as much data as possible,” he said. “Not everyone’s aggregating data, but the use-cases are the critical component.” At the moment there’s consensus that data is valuable, but what happens with that data and just how valuable it will be, is yet to be determined.

Robo advisors like Betterment were cheered by the report as well. As both a consumer and provider of financial data, the company was impressed by The Treasury Department’s efforts to support the position of data aggregators, especially as some “large financial institutions” seek to restrict who is able to access consumer data, said Josh Rubin, corporate counsel at Betterment.

“Positions that have been taken by large financial institutions, large banks, might suggest that they’re not quite as happy with the direction that the Treasury report goes in,” Rubin noted. Those unnamed legacy institutions are fomenting the development of additional reliance on firms that have traditionally held large quantities of consumer data by restricting access to insightful data. Their concerns, in the name of liability, are a red herring, he said. “It’s actually pro-incumbency and anti-innovation.”

Fidelity Investments, with $2.6 trillion in assets under management, doesn’t see it that way. Data aggregation is helpful for advisors, said Stuart Rubinstein, SVP in Fidelity’s Innovation Development division, but the “how” of data aggregation is key. “We are talking about some of the most sensitive data about an individual,” he said. “Anyone who holds financial data needs to be held to the highest security standard.”

The Treasury report recognized the hazards of data aggregation, said Rubinstein, especially in its recommendation to provide easy means for consumers to revoke aggregation authorization. “If a customer, or an institution, is harmed by someone else in the ecosystem because they did not live up to their security obligations, [the third party] needs to be responsible for the damages that happen,” he said. Fidelity uses bilateral agreements with aggregators and is focused on eliminating the need for consumers to enter their credentials into third-party websites or applications via its Fidelity Access service.

Data aggregator Finicity also prefers to form bilateral agreements with financial service companies. It’s an approach that’s drawn criticism from other aggregators, but one that will better serve the industry until solid standards are in place, said Nick Thomas, the company’s co-founder and president.

A Bluetooth pioneer, Thomas thinks the way forward for fintech cooperation and innovation is by incorporating the same standardization that made Bluetooth the connector-of-choice for devices ranging from wireless keyboards to mini-boomboxes. “That’s really the future,” he said. “The role of that intermediary that we’re playing needs to be more formalized from a regulatory perspective, rather than a free-for-all approach.”

Regardless of the method taken by aggregators, the Treasury Department report shows that “big data” in advisory technology is here to stay. In fact, the more actionable insights that aggregators can provide, the more important aggregation will be, said Doug Fritz, founder and CEO of F2 Strategy. Features enabled by aggregation, like MX MoneyDesktop’s capital event alert, could accelerate if recommendations around standardization between financial institutions and fintech companies can be achieved. “The real area of growth for [aggregators] should be in the value-added analytics and insight they might provide their clients based on the volumes and trends in the data they see,” Fritz said.

The Treasury sees a world in which insights gleaned from clients’ aggregated information plays a prominent role in advisors’ practices. It’s a future that if planned responsibly and securely should ultimately allow advisors to provide better advice for their clients.