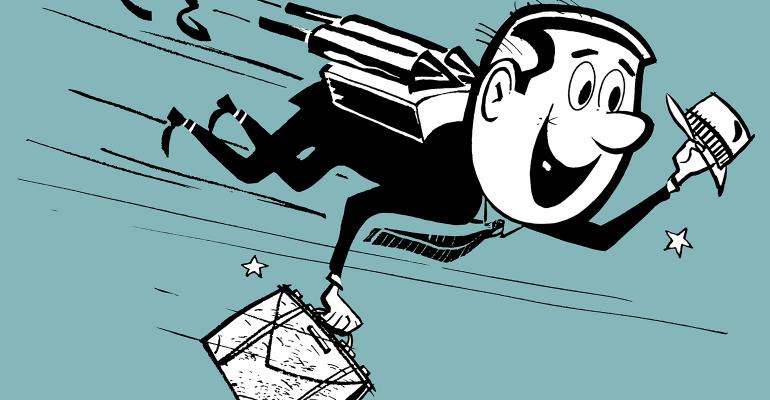 A special edition of the report card where Riskalyze CEO Aaron Klein provides his take on the biggest news to hit advisor tech over the past 10 years.

What Happened: Betterment, one of the original robo advisors, launched at TechCrunch Disrupt in May 2010. The service represented a stark contrast to traditional wealth management, with no investment minimums and management fees well below 1%.

Why It Matters: When robos came on the scene, many pontificated that digital advice might overtake traditional advisors with its low cost and simple onboarding. So, how has this played out so far?

Well, things got a bit heated for me in 2016 when I called Wealthfront “E*TRADE with an expensive coat of paint” and sparked some controversy on Twitter about who (or what) can use the title “advisor,” but here’s the reality—I hope self-directed investing platforms find success in reaching new markets.

The tide rises for all boats here; these investors will still look to an actual advisor when life gets more complex. There are a few key psychological shifts that happen when things get complicated:

As long as we’re not calling self-directed investing “advice,” I’m still rooting for the positive effects of these platforms: democratization of investing and pressure on advisor technology to innovate.

Overall, I’d argue that robo advice has done more to advance the services offered by human advisors, and illustrate their value, than it has done to replace them. And I look for that to continue into the next 20 years.

What Happened: Fidelity launched the first mobile app for its advisors, the first among custodians. The app, originally available only on iPhone, allowed advisors to view accounts and get alerts for changes to holdings.

Why It Matters: It seems odd now, but back in 2011, custodians were still figuring out if their advisors even wanted a mobile app. Progress for advisors was slow. Fidelity’s first app allowed advisors just a read-only look at client accounts with no ability to trade or add more information. Today, some firms could almost be run entirely from an iPhone. The advancement in mobile apps has been in lockstep with the ability of advisors to work anywhere to establish virtual, remote practices to serve a diverse set of clients.

Why It Matters: This was Envestnet’s first major tech acquisition after going public in 2010 and adding Tamarac portfolio management made their appetite for a comprehensive advisor desktop known.

Lori Hardwick, chairman at Riskalyze, served as group president of advisor services at Envestnet and was foundational to their growth for over 15 years, so naturally, I asked for her perspective:

“At this time, Envestnet had been largely selling its services to broker-dealer enterprises. And although Envestnet wanted to broaden its footprint in the growing RIA market, those firms required a more robust trading solution. Tamarac not only provided the robustness that RIAs were seeking, it also had a reputational prowess with RIAs that allowed Envestnet to expand into the RIA channel in a big way.”

This acquisition marked the beginning of a new strategy for Envestnet. She continued, “Of note, this was the first time in Envestnet's history in which a new acquisition's features and functionality were not fully integrated into the core Envestnet technology—as had been done with PMC, Net Asset Management, Fundquest, Placemark, Oberon, and Prudential Wealth Management Platform. Keeping Tamarac separate and distinct was a deliberate strategy; we did not want to potentially water-down the strong Tamarac name and the way its platform appealed to the RIA marketplace.”

What Happened: In 2013, Wells Fargo gave its financial professionals the go-ahead to use Twitter for official business purposes. The move came seven years after the official launch of Twitter.

Why It Matters: Back in 2013, Wells Fargo was just getting its advisors started on social media. Seven years later, it’s hard to find a financial professional who isn’t active on a platform like Twitter or LinkedIn. Twenty years ago, clients could go online to find a phone number. Today, they can have real-time conversations with almost anyone in the world. Social media has revolutionized the way professionals communicate and grow their businesses.

What Happened: Morningstar acquired account aggregation software ByAllAccounts for a $28 million price tag in an effort to push itself ahead in the competition to provide clean held-away data to advisors.

Why It Matters: Just recently we witnessed Visa buy up Plaid. It’s easy to forget that if you turn the clock back by 10 to 15 years, RIAs were struggling to simply get clean data from any nonmajor custodial source and were often dealing with screen-scraping technology to get transactions, not to mention prices or asset values. ByAllAccounts paved the way for data aggregation in wealth management firms, and their acquisition by Morningstar signaled the increasing attention being put toward the technology, which has now become a critical piece of how advisors work with clients on their total wealth picture.

What Happened: Cybersecurity wasn’t a brand-new discipline in the 2010s, but concerns around the topic were about to go mainstream. In 2014, JP Morgan had information compromised on almost 80 million consumers. A few years later, Equifax had data stolen on 150 million people. As more wealth management operations and data moved to the cloud in the past decade, the need to protect their individual firms grew along with it.

Why It Matters: Wealth management firms have always needed processes to vet vendors and ensure employees were following the letter of the law. At the turn of the century, cybersecurity, to the typical office, meant installing anti-virus software on each computer. With the rise of client portals and the ease with which money can be moved digitally now, the burden placed on advisors to create a safe digital environment for client accounts has gotten heavier. Advisors now need to be even more mindful about how they take orders, do their diligence when working with vendors and have a sharp eye for more sophisticated phishing-scam techniques.

What Happened: As more advisors built their firms with financial planning at the center of their value proposition, large institutions started to buy planning software. First, Fidelity bought eMoney in 2015. Then in 2019, Envestnet acquired MoneyGuide and Orion Advisor Solutions bought Advizr.

Why It Matters: At the beginning of the 2010s, the story was about how many financial planning choices there were. By the end of the decade, the story was about the “big buy-up” of platforms like MoneyGuide and Advizr and how few independent vendors were left. While the rush to add financial planning as a core component of the overall wealth management experience took time, the maturation of advisor value has cemented it now as a core component in almost every comprehensive technology stack you can find across the industry.

What Happened: In April 2015, a speech by President Obama unveiled a new effort to regulate the industry through the Department of Labor (the first stab at a proposal occurred in 2010). The process of revising the rule took a year, days of hearings, and countless pages of commentary and petitions, but in the end, it was never enacted. That didn’t stop the industry from trying again.

Why It Matters: The traditional perception has always been that wealth management doesn’t change much. The Investment Advisers Act is from 1940, after all. But if there was any question about how much finance is changing, the past five years have answered it. Regulatory bodies have tried and failed to enact new stipulations on fiduciary advice. While the DOL’s fiduciary rule came and went, it now appears Reg BI is on the way forward—and I’m not sure any of its many lawsuits will bring it down in a similar fate. These new regulations will continue to drive compliance technology and consultants to help overwhelmed firms navigate the changing landscape.

Why It Matters: Bitcoin hasn’t reached the highs of December 2017 again, and its value has continued to fluctuate wildly year over year … or month ... or week.

So, why have advisors needed to concern themselves with such a volatile asset? Bitcoin’s record value brought with it record consumer curiosity, and curiosity means phone calls to the financial advisors who need to be prepared to answer questions.

Now, what was a fringe anomaly at the start of the decade is quickly becoming an entrenched part of the global financial system today, with the SEC currently considering the approval of a bitcoin ETF.

Advisors have to stay knowledgeable about new financial assets, in whatever form they arrive. And so, advisors now must know enough about cryptocurrency to continue to provide well-rounded and expert advice in a new decade.

What Happened: Charles Schwab is in the midst of acquiring TD Ameritrade for $26 billion in an all-stock transaction. Assuming all goes as planned, the new mega-custodian will dwarf all other custodians in the United States.

Why It Matters: One of the biggest things to upend wealth management happened right before the decade ended. For most of the time, we watched custodians battle against each other to bring advisors to their side—now the question is how the ultra-custodian keeps all the advisors it will have. Some questions were answered at LINC 2020 (no re-papering is a big win for advisors), but many more still linger. While this move will initially consolidate competition, it opens the door in the long run for new entrants to upend the status quo and introduce new ideas for how a custodian should interact with RIA firms. We wish our friends at TD Ameritrade and Schwab all the best!