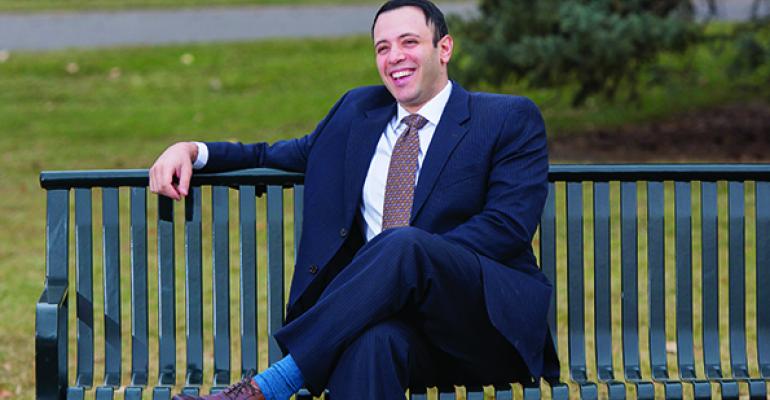 <p>Does he look like a robot to you?</p>
News>Industry

Amin Dabit is not a robot.

He is a financial advisor who began his advisory career in a very conventional way. He was an intern at UBS, earned his CFP, and signed up with Merrill Lynch in 2008. He helped clients with financial plans and set up events to generate new referrals. He owned a minimal percentage of the practice’s $180 million book, he says, but was exceeding his production numbers and “doing very well.”

So it’s all the more surprising that Dabit walked away from this enviable career at one of the top brokerages to join Silicon Valley startup Personal Capital, founded by the former CEO of PayPal and Intuit, and backed by $100 million in venture capital.

Like other firms often maligned (somewhat defensively) as “robo-advisors,” Personal Capital provides an online platform of free tools that let investors track and benchmark their holdings. The hope is that some of those users will take the next step and ask for advice and investment management—which is where Dabit comes in. These companies operate at a fraction of the cost of conventional financial advisors.

Several variations of these new platforms have evolved in recent years. Some don’t use advisors at all. Wealthfront, Betterment and FutureAdvisor have formed RIAs and are using software that populates portfolios chiefly with low-cost index funds and ETFs, based on information provided by clients on their risk tolerance, investment goals, and related parameters.

But some are providing opportunities for advisors like Dabit who sense change is coming. Like Personal Capital, SigFig also employs a handful of advisors, as does LearnVest under a slightly different business model. And now larger custodians are stepping into the market with consumer-friendly automated offerings of their own—also with access to real advisors.

The human advisors who have chosen to ply their trade working with these firms aren’t seeking to destroy the industry, they say. They just see where it is going.

“I feel the model of advising in a wirehouse is still 30 or 40 years old,” Dabit, 32, says. “Back then there were brokers who pitched stocks, and then they started pitching mutual funds, and now it’s pitching financial planning and trying to get more pocket share. But the system is still the same. I felt, being somebody who’s younger, that that’s not going to be the way the business works in the next 30 years.”

These firms are not a threat to good financial advisors, just a threat to the way some have worked in the past, argues Michael Kitces, publisher of the industry blog Nerd’s Eye View and director of research at Pinnacle Advisory Services. “I think advisors en masse are in the front edge of what’s going to be a long multi-year trend of the crisis of differentiation,” he says. “When everybody was a small local advisor, you got away with that because you only had to compete with the people in your own marketplace. But when you have to compete with venture capital-funded firms and national asset-management firms that have monstrous marketing budgets and huge existing reach because they already have a big client base, that’s going to be a really significant challenge.”

So joining a firm that leads with the technology could be an advantage. For one thing, prospecting for clients at a conventional firm is a daily challenge. “They say, ‘Here’s our umbrella. You get to use the Merrill Lynch name; now go out there and find people,’” says Dabit.

In comparison, Personal Capital has about 600,000 users of its free tech platform—a ready pool of potential clients for its advice. Each profile is accompanied by a precise accounting of the prospect’s key wealth holdings. Conversions can take months—not years, as can be the case at brokerages, Dabit says.

The desire for a new way of doing business also appealed to Timothy Salunga, 29, who signed up as a financial advisor at SigFig in January after holding sales positions at Scottrade, Fidelity Investments and TD Ameritrade.

The work in those firms could be a grind, he says. “You’re up against other salespeople, and you have metrics, and every quarter you’re trying to hit numbers and getting pinged on how many people you close.” He also felt conflicted about selling products that paid good commissions but weren’t always best for his clients, he adds.

Now SigFig’s platform provides Salunga with a stream of potential clients, and he can review their portfolios and suggest solutions that fit their needs.

He speaks with four to six people a day, interviews that can last an hour or longer, he says. His compensation is salary, equity, and bonuses that are related to client satisfaction instead of sales goals. The compensation was “definitely attractive,” he says. Salunga, who holds a Series 7, 63 and 66, expects to take the CFP exam in March.

Personal Capital expects to double its number of financial advisors by the end of next year, says Kyle Ryan, its vice president of advisory services and a former group vice president at Fisher Investments. Many come from wirehouses or smaller traditional independent firms, he says. (Helping to boost the firm’s credibility is the more than $100 million it has received in venture financing, including $50 million announced in October from a group led by Corsair Capital, BBVA Ventures and USAA.)

Ryan says the employment pitch is an attractive one to younger financial advisors. Consider, he says, the failure rate of the training programs at the major wirehouses. “Not too many advisors make millions each year, but that’s the story that sells everyone,” he says. “It’s very difficult to see how I’m actually going to get to that exalted ground that everybody lays out.”

But for advisors who are interested in working with clients and solving financial problems, Personal Capital provides an alternate career path. Some advisors on staff focus on recruiting clients for the service out of the pool of investors who use Personal Capital’s free tech platform, so prospecting for clients isn’t entirely off the table at the company.

Ryan says the firm isn’t interested in the assets a prospective advisor can bring over, but it does require a Series 65 license and a comfort with technology. That includes a willingness to forgo the use of taking notes on paper. “It’s not some crazy idea, but it’s still not how most people operate,” he says. The firm also encourages its advisors to obtain a CFP, although it’s not a requirement; 10 advisors currently have it—as does Ryan—and almost 20 others are going through the process.

A Series 65 license also is required for advisors at SigFig, which tracks more than $300 billion on its platform. CEO and Co-Founder Michael Sha says the RIA is still rolling out its service offering, so the staffing is rather modest—just 10 advisors who work with clients. (Its most recent ADV filing with the SEC reports just under $60 million in assets under management on fewer than 700 accounts; Sha says updated numbers would be released following a broader launch early this year.)

The firm rejects a tech-only approach, he says, because a segment of its clients prefer a human touch along with the automation. “It’s hard to change the way people are wired,” he says. “Better to build a service that complements what people are looking for than to force them into using something they’re not looking for.”

Not all firms with online tools and financial planners are in the wealth management business. LearnVest, a New York City-based planning program, provides an online platform for consumers who want to track financial goals; it offers hands-on help from professional planners on its staff, but it doesn’t give investment advice or hold discretion over client assets.

Instead, LearnVest provides a range of fee-based service offerings, for a $299 setup fee plus $19 a month*, that help its clients set and reach goals such as buying a house or funding retirement. Clients are drawn by the firm’s offer of a free assessment of their household’s financial condition, and through partnerships that provide LearnVest’s tools to employers that offer their workers 401(k) plans.

About 50 planners are on staff, drawn from a variety of backgrounds including top brokerages, says Stephany Kirkpatrick, vice president of operations and financial advice. The firm wants its planners to hold either a Series 65 or a CFP. (Kirkpatrick has both.)

One of her favorite questions during job interviews is to ask prospective employees what kind of innovations they’d like to see in the next 12 to 18 months.

“Some of the best ideas we can possibly get come from the people who interact directly with clients,” she says. “One of the things we’re looking for is an interest and a willingness to share those ideas and contribute back to the technology and product development.”

Earlier this year Vanguard opened its Personal Advisor Services program, offering basic indexing portfolios for clients with a $100,000 minimum at a 30 basis point fee of assets under management. (Management says the minimum will fall to $50,000 when the program is fully rolled out.) The program also provides advisors with CFPs who work closely with clients. And in October, Charles Schwab said it would roll out an automated investment advisory service, Schwab Intelligent Portfolios, in the first quarter of next year. Investors with as little as $5,000 will be able to obtain diversified portfolios with low-cost holdings, all without paying program management or advice fees.

Doug Mento, principal in Vanguard Advice Services Group, says the asset manager built special technology for Personal Advisor Services that would allow users to track their progress toward financial goals. But like Sha, Mento doesn’t believe a purely automated solution works for many people because human nature gets in the way—they need someone to remind them to stay on plan, not to chase performance; to invest for the long term; and to understand their risk tolerance, he says. While still in the pilot phase, the Vanguard program already has $4.2 billion in AUM and more than 4,000 clients.

Perhaps the biggest change for advisors who trade their brokerage for this new space is the compensation—leaving behind potentially lucrative commissions in return for a salary, and in some cases a performance-based bonus and perhaps equity in the firm. It was a question Dabit thought hard about, but in the end he felt his career would go further if he left Merrill. A minority stake in his practice wouldn’t provide him with as much control over his future as would equity in a growing company, he reasoned—Personal Capital offers stock options and performance bonuses. And there’s room for advancement—a little more than a year after he started, Dabit already oversees 10 other advisors at his new firm.

Did he consider whether he was walking away from a bigger payday at his former company? “Absolutely, that went through my mind,” Dabit says. “But it goes back to changes in the industry. Don’t get me wrong—Merrill’s going to be there for a very long time. But the way that business is done can be more efficient.

“I know I probably left money at the table at Merrill. But I also feel like I’m doing something with a group where we all have ownership and can change the way business is done.”

* Learnvest changed its pricing after the original article went to print. The correct pricing is reflected in the story here.