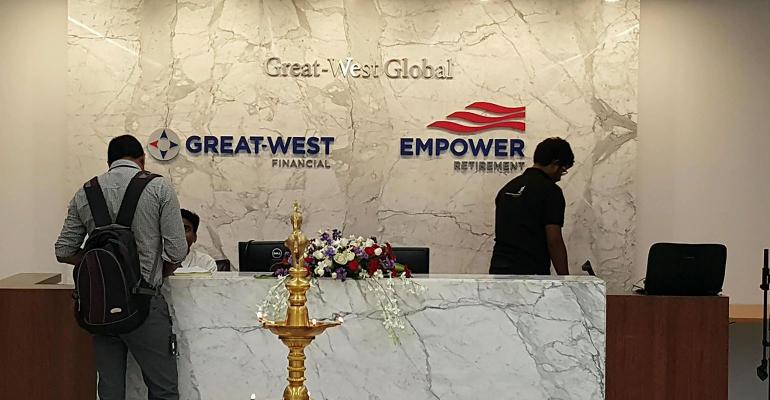 One of America’s largest retirement plan providers announced plans to partner with Wealthsimple and Apex Clearing to create what could become one of the largest advisor-centric financial planning platforms for mass affluent investors.

Empower Retirement, the second largest retirement plan recordkeeper in the U.S., hybrid robo advisor Wealthsimple and custodian firm Apex Clearing are joining forces, according to Empower Retirement, to launch what could potentially be among the largest digital wealth management platforms for retirement account investors both inside and outside the workplace.

Parent company Power Financial Corporation owns both Empower Retirement, which has $570 billion in assets under administration across 8.7 million retirement plan participants and topped off its $131 million investment in Wealthsimple earlier this year. The firm made its first investment in the robo in 2015, which operates in the U.S., Canada and the U.K. providing individual investors access to human financial advisors in addition to its digital advice, listed $85 million in AUM for its U.S. arm on its most recent filing.

The new platform will give Empower Retirement’s individual retirement plan participants access to what will eventually be an end-to-end user interface with robo investments and planning functionality, supported by the digital back office of Apex. The aim is to provide IRA and individual investors with financial planning, investment advice and insurance offerings, according to Empower Retirement; the firm’s target is investors “who may not currently work with a professional advisor.” For now, investors in workplace retirement plans provided by the firm will continue using the Empower Retirement Participant Experience, said company spokesperson Stephen Gawlik.

Merging the assets of a massive traditional retirement player like Empower Retirement with Wealthsimple and Apex is a good move, said Alois Pirker, research director at Aite Group’s wealth management division. “You’ve got really good ingredients that you can cook with,” he said. It puts Wealthsimple on the map in the U.S. in a way it hadn’t been seen before and gives Empower Retirement a way to differentiate itself and provide better digital service.

“It creates a tremendous amount of stickiness,” Pirker said. A goal- and planning-based solution, backed by a large asset source, will eventually come out of the partnership, he predicted. Digital solutions in the retirement space have been “a sleepier area, in terms of innovation, but at the same time it’s a big area in terms of assets. So, it’s a classic space to come in with digital and really show a completely new experience,” he added.

It’s a similar strategy but a different direction than that of Financial Engines. Considered the first robo in the retirement space, the company entered into an agreement with Edelman’s owner, Hellman & Friedman earlier this year. At the time, the deal was praised as having “synergies [that] work both ways,” by Jeffries Group analyst Surinder Thind.

Both strategies recognize that digital advice, human advice and retirement savers’ assets need to find each other. Financial Engines approached it from a start-from-digital perspective, then went out to find participants. Empower Retirement is moving the other way, starting with a limited digital platform but with all the other ingredients in place, noted Pirker.

The move also comes at a big moment for Apex, which will provide clearing, custody and execution services for the new platform, according to Gawlik. Currently, securities offered by subsidiaries of Great-West Financial are cleared, settled and custodied by Pershing. With Robinhood recently dropping Apex to launch its own clearing solution, this deal marks a big splash for Apex in the retirement space and signals that a major player sees value in its digital back office.

Apex’s digital back office will combine with the human element at Empower Retirement, said Murphy. “Ours is an advisor-centric model. [We’re] here to help those who may not be accessing professional advice on their own.”

But it may the robo advisor Wealthsimple that benefits the most from the partnership, said Pirker. If the robo can make a case for itself with Empower Retirement, there’s a huge potential in other  Power Financial Corporation holdings, like Putnam Investments. As these are plans, not a product, it remains to be seen, but the fruit of this partnership could eventually make Wealthsimple the “biggest B2B2C player in the market,” said Pirker.