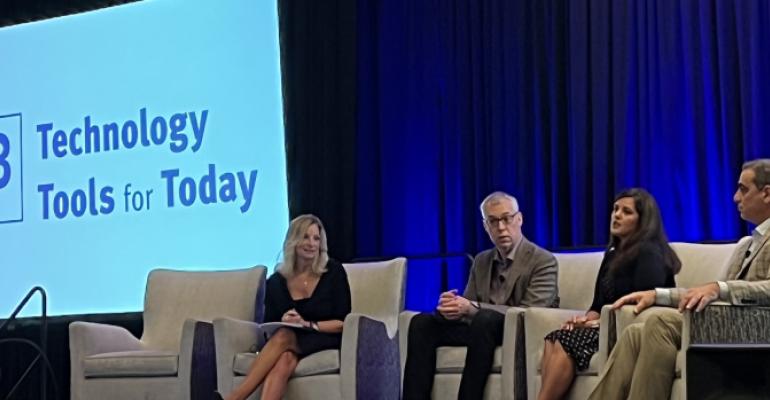 Data, Decumulation and the Third Wave

Insights and anecdotes our technology columnist brought home from the T3 Enterprise Day in Texas.

A mix of a few dozen executives from independent broker/dealers, registered investment advisories and vendor representatives filled a large hotel ballroom Thursday in Denton, Texas, at day four of the 2022 T3 gathering.

The sessions all focused on subject matter of concern to decision-makers at IBDs, larger RIAs, hybrid firms and rollups. Here are some of the things I found most interesting or surprising from a technology perspective.

A focus on data from multiple angles

A strong focus on data permeated the conference’s Enterprise Day. A first example came in an early-morning session in which moderator Suzanne Siracuse, former publisher of InvestmentNews and now head of her own eponymous consultancy, stated that “data is the new gold” as her opener for a section on the topic during a panel discussion she led.

Going around to her panelists, who represented Mercer Advisors, Advisor Group and LPL, respectively, the discussion began not with the increased value of client data, but rather the increased levels of concern around issues of data sharing, privacy and cybersecurity.

Christine Cataldo, chief technology and digital officer at Mercer Advisors noted that these latter concerns are what keep her up at night. A later speaker noted that cyberattacks on corporate networks increased by 50% in 2021, according to research from security software provider Check Point.

“When I’m reviewing a new third-party technology provider, and I look for and do not find that they are SOC 2 compliant, they come off our approved vendor list,” said Cataldo.

The SOC in SOC 2 stands for system and organization controls, and the whole represents a voluntary compliance standard for all sorts of service organizations spanning many industries developed by the American Institute of CPAs (AICPA). It specifies how organizations should manage customer data and is based on five categories of criteria: security, availability, processing integrity, confidentiality and privacy.

This prompted Pete Clemson, head of digital solutions at Advisor Group, to raise a “mindset shift” he has seen in the advisory industry among larger firms: “Today, you need scale to secure your technology,” he said, and discussed the group’s recent appointment of Clayton Chandler as chief security, privacy and data officer. Chandler, who has a Ph.D. in computational analysis, had most recently served as chief information security officer and global head of cyber security and Americas head of technology security at Credit Suisse.

I interpreted Clemson’s comments to mean that big firms, with a large presence and large networks, are also big targets and proactively protecting them from security threats requires hiring the best minds.

“Find an expert or partner if you don’t have scale to hire your own internally,” warned Clemson at the close of that discussion.

In addition to the discussions of data security, there were several presentations on making the most of the data firms either already have or are collecting from and about their clients. I attended sessions that ranged from panel discussions (as above) to those with more specificity, including one by Orion Advisor Technology going into greater detail on its recent announcement making real-time data sharing cloud-based data warehousing technology Amazon Redshift available to its client firms and another on better harnessing the power of Saleforce’s Einstein artificial intelligence engine.

"Joel may need to change the name of the conference from T3 to D3—D as in Data—going forward,” said Gavin Spitzner, president of Wealth Consulting Partners.

“There's been as much focus by providers and users on data as technology this year, how we collect it, manage it, integrate it, secure it, surface insights out of it—given the modular world we live in, just having cool technology isn't enough anymore—it's about how data passes back and forth and how accessible it is for the benefit of the firm, the advisor and ultimately the end client," Spitzner said.

Decumulation on the agenda

I was glad to see a sponsored session that resonated with me in the afternoon. Admittedly, I’ve become biased because of the looming crisis in generating retirement income among the tens of millions of retirees who have not saved enough. There has been no great answer provided by either government or advisors to address the lack of retirement savings across wealth strata.

Even so, too few advisors have learned to take care of even high- and ultra-high-net-worth clients when it comes to the decumulation phase.

After spending a significant amount of time covering retirement income technology over the past two years—between stories on IncomeConductor and IncomeDiscovery, a few stories on Merrill Lynch and its efforts at combining portfolio management and financial planning, and interviews with Joseph F. Coughlin, director of the Massachusetts Institute of Technology AgeLab and others about “longevity planning”—it was great to see that Joel had some interest in having the subject on the conference’s agenda.

“We as an industry are really great at going up the mountain on accumulation, but this is a different set of math, and clients are confused and find this super complicated, as do many practitioners,” said William Meyer, founder of Retiree Inc. the purveyor of Income Solver, a decumulation strategy overlay application.

In his presentation, he discussed three new modules in Income Solver that included the “Easy Button” for calculating retirement income, what he referred to as the decumulation TAMP, tools and marketplace for managing income, and features for coordination of income streams.

And throughout, he warned firms and advisors that “your clients will leave you [if you can’t handle decumulation].”

It was a shame that Alessandro Vigilante, a researcher at Fidelity Investments, was saved to near the end of the day. He studies fintech & emerging businesses for the firm, and his short presentation was both amusing and insightful.

His description reads: The first wave of fintechs used digitized user experiences and software-business economics to disrupt inefficient vertical products. The second wave went further, building embeddable products and offering a full suite of services. Whereas Waves One and Two built their products on top of existing infrastructure and frameworks, Wave Three fintechs want to transform the core of financial services, using technology to reimagine and reinvent money, assets, processes and business models.

“The first wave of fintechs was essentially like giving vitamins to financial services, the second wave was akin to surgery,” he said. And to paraphrase, the third wave is about using tokens, tokenization and smart contracts to reinvent the whole system.

The goal is all about moving “towards a new operating system for financial services.”

The mind blowing thing was, for me, thinking about how anything can be fractionalized and tokenized, the two largest examples in terms of modern monetary value he shared being real estate (hundreds of trillions of dollars in value) followed by the equities market.

It is not, however, all about “pictures of monkeys,” referring to the Bored Ape nonfungible tokens that are so emblematic of the NFT craze, which he returned to again and again to help emphasize the bigger picture when it comes to the impending significance of blockchain technology.