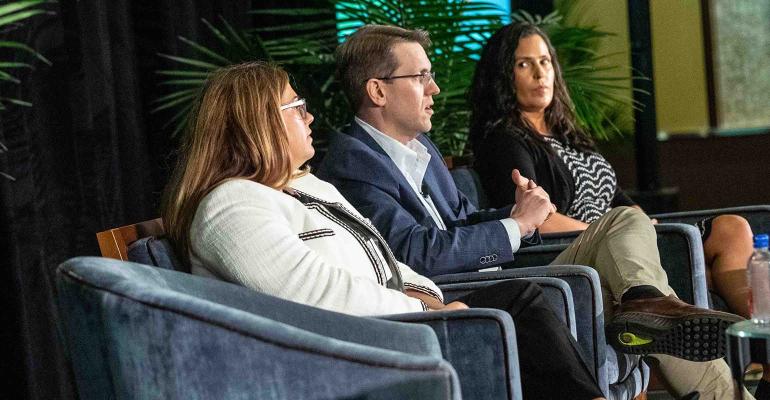 Tech leaders at a variety of firms also discussed cybersecurity, artificial intelligence and the benefits of competition during a panel discussion in conjunction with the annual WealthManagement.com Industry Awards.

In tackling the pernicious challenge of convincing teams and firms to adopt new tech, chief technology officers at a panel discussion held during the 2022 WealthManagement.com Industry Awards recommended finding “tech-forward” advisors to evangelize for the changes.

The panelists also emphasized how their roles entailed marketing and selling of newly adopted technology within their firms. Tuppy Russo, head of Private Wealth Infrastructure at AllianceBernstein, said that as much as half of her workload centered on marketing and communicating value to team members. Alyssa Phillips, the chief operating officer with HCR Wealth Advisors, highlighted the benefits of finding tech advocates in your firm’s advisor pool.

Related: RIA CEOs: Client Experience and Capabilities to Shape the Next 10 Years

“How do you curate your message to certain groups of folks so you can get them on board? Because you need to have some level of organic excitement around the new tech,” Phillips said. “Finding the early adopters who are going to get out there and jump in is extremely important.”

The discussion, which was held at the InterContinental Times Square hotel in New York last week and moderated by Nexus Strategy President Tim Welsh, touched on a variety of hot topics in the space, including artificial intelligence, cybersecurity and the difficulties of tech integration.

Phillips said HCR had looked for ways to bring systems together, including combining its portfolio management and trading/rebalancing software, which were separate when Phillips first came on board. Meanwhile, Russo said she saw a need for more efficient management of private alts and said she wanted the firm to integrate it into its standard servicing model.

For Phillips, adding gamification and competition boosted HCR's low tech adoption rate of 12.5% when she first joined. Phillips said she knew that adopting tech solutions for administrative and client services would be seen as extra work. So, she started with the advisors, illustrating the value of the new tools and how they would generate more business (and by extension, higher commissions).

Then, Phillips attached points to the amount of activity per team member in the CRM system, which generated a buzz in the office that attracted the attention of client services and operational staff, who began approaching Phillips for help. In all, the process brought the team to 100% adoption in 18 months, according to Phillips, with the only expenditure being a prize of a $25 Amazon gift card per quarter.

“That, and bragging rights,” she joked. “Obviously, those are priceless.”

When preparing for cybersecurity threats, the CTOs all had upgraded their own sophistication (and resource allocations) to meet increasingly sophisticated threats.

“We have to get out in front of it. We have to not only know the types of threats out there, but make sure our team knows and make sure they are constantly trained,” Phillips said. “It’s always changing, and it’s not just ‘I’m stuck in a different country, send me money’ anymore.”

For Gates, cyber protections needed to reach further and do more than they had previously. Whereas earlier, a traditional business would typically be responsible for protecting the home office, now LPL needed to work with everything touching the firm’s business, offering “essentially free consulting services” for third-party suppliers, as well as indie advisors and their practices.

The firm also saw an opportunity to offer premium low-cost services, as LPL offers the benefit of scale that some smaller businesses using its platform cannot, according to Gates.

“From a security space, we find ourselves extending ourselves out into the ecosystem more than we used to in the past,” he said.