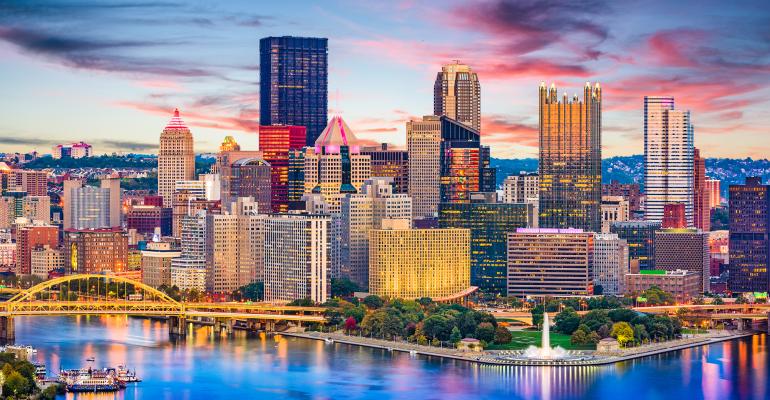 Housing Prices Are Booming in U.S. Cities—Just Not San Francisco or New York

Home prices in urban U.S. markets rose 15% in the three months through late January, slightly ahead of the annual pace in suburbia, according to Redfin.

(Bloomberg) --Maybe you’ve heard: The pandemic is killing cities, fueling a rush to spacious houses in the suburbs. But beyond pricey New York and San Francisco, real estate demand is booming in downtowns across America.

From Pittsburgh to Detroit and Phoenix, condos and townhouses within stumbling distance of bars and restaurants are hot. Like the families now upgrading to bigger suburban homes, young white-collar workers are taking advantage of record-low mortgage rates and flexible remote-work policies to move to desirable cities with relative affordability.

Home prices in urban U.S. markets rose 15% in the three months through late January, slightly ahead of the annual pace in suburbia, according to data from brokerage Redfin, based on geographic designations developed by the Census Bureau. It’s a shift from early in the pandemic, when prices were lagging behind outer areas or even falling, a sign that Covid-19 vaccines are helping to fuel demand as nightlife makes its return.

“People are anticipating that now is a great time to buy,” said Daryl Fairweather, chief economist at Redfin. “They’re not thinking about the short term. They’re looking forward to eating inside restaurants and going to concerts.”

Perhaps no part of the U.S. economy has been buoyed by the Federal Reserve’s easy-money policies more than housing, and with cities now joining the suburbs and exurbs in the boom, the impact on growth appears to be broadening. In some regions, urban areas are now substantially outperforming.

In Louisville, Kentucky, values for properties in the more densely populated neighborhoods surged at more than twice the rate that they did in suburbs over the past three months. Detroit, plagued by poverty but home to a downtown packed with gleaming new condo towers, saw urban prices soar 43%, almost quadruple the rate of less-dense parts. In urban Baltimore, prices jumped 34% while they rose 10% in outer areas.

Newly divorced, Alec Studstill, 36, relocated to Baltimore from the Washington, D.C., suburbs during the pandemic. After losing out on a few places because his offers weren’t competitive enough, Studstill paid about $500,000 for a row house near the Canton waterfront. That was right around the asking price.

“My lifestyle’s a little more active than it used to be,” said Studstill, a management and program analyst with the Securities and Exchange Commission. “I wanted that city and urban lifestyle, but real estate in D.C. was ridiculous. Baltimore was the next big thing.”

Cities such as New York, San Francisco and Boston -- major urban centers with expensive housing relative to the rest of the country -- are among the outliers. Buyers no longer feel justified paying top dollar for a tiny space when theaters and bars are closed, and denser cities depend on public transit that’s unappealing during a pandemic.

Long-term remote-work policies also mean there’s no need for some people to stay close to industry hubs, though they still may want the perks of urban living. Transplants from those places are instead going to areas such as Austin, Texas; Boise, Idaho; and Columbus, Ohio, where they can live comfortably, for less.

Take Nick Kraus, a 25-year-old who moved out of the tiny apartment in Manhattan that he shared with three roommates. The management-consulting firm that employs him now allows workers to live anywhere. He conducted a scenario analysis, concluding that New York was overpriced and condo fees in Miami were too high. So he settled on Nashville, Tennessee, where he knows hardly anyone, and purchased his first home this month for $550,000.

That bought him 2,000 square feet, including three bedrooms and a covered deck with wet bar. The pool and foosball tables are on order. And there’s plenty to do nearby in the meantime -- Kraus says there are 10 bars and restaurants in walking distance.

“One of the things I didn’t want to give up when I was leaving New York was that urban walkability,” he said. “I don’t own a car and I don’t plan to.”

Downtown Louisville, with its high-rise condo towers, has something in common with midtown Manhattan. The office workers are gone, the streets seem empty and the high-end units aren’t selling very quickly. But buyers, including many from around the country, are snatching up townhomes and single-family houses in the vibrant urban neighborhoods that surround it.

For Loeser, who does most of her business in these urban areas, 2020 was her best year since becoming an agent a dozen years ago. Her team sold $15 million of real estate, up 25% since 2019, she said.

“You can list a house two minutes from downtown and will probably have five offers in the first 24 hours,” she said. “There is a younger contingent that is happy to be in those urban areas and will buy that house from the person who wants to vacate.”

“Buyers in the city have to be ready to go -- they can’t pause,” she said. “They have to know they might go over asking price.”