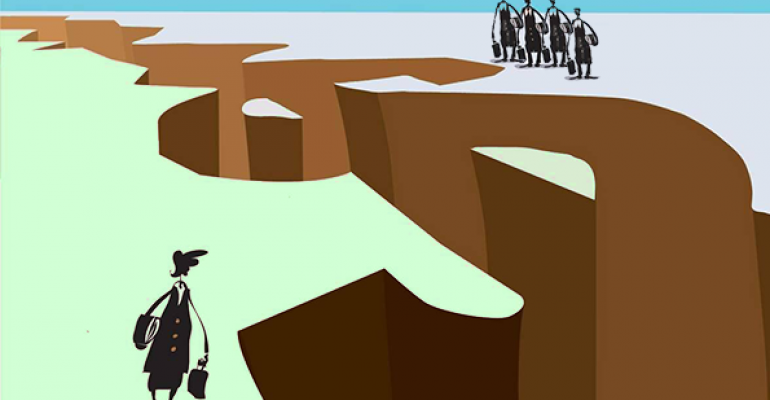 In the RIA world, the asset gap between the smallest and the largest players is ever widening.

The largest registered investment advisor firms—those with $100 billion or more in regulatory assets under management—represent more than half of total assets in the space, according to a new report by the Investment Adviser Association and National Regulatory Services. But smaller firms—those with less than $1 billion in assets—account for only 3.5 percent of total assets but 71.5 percent of the total number of firms.

“The ends of the barbell are pushing apart,” said John Gebauer, managing director of National Regulatory Services. “We have this marketplace, this profession, where there’s all these small players and there’s all these large players, and not only are they competing against each other for the same clients, but they have to meet the same regulations and they have to meet the same business, operational goals.”

The 2014 Evolution/Revolution report, an in-depth study analyzing annual updates filed by SEC-registered investment advisors, found that the industry’s total asset count grew 12.6 percent from 2013 to $61.7 trillion. But those assets are increasingly concentrated among 112 of the largest firms (managing $100 billion or more), who grew their share to 52.6 percent this year, up from 50.9 percent last year and 48.9 percent in 2012. Meanwhile, firms with between $50 to $100 billion in client assets saw their share of the channel's total assets decline to 12 percent this year from 13.4 percent in 2012.

“If the tide is rising all boats, then the ones at the top are rising at the same rate as everyone else, and a couple mergers and acquisitions, and then their concentration increases,” Gebauer said. 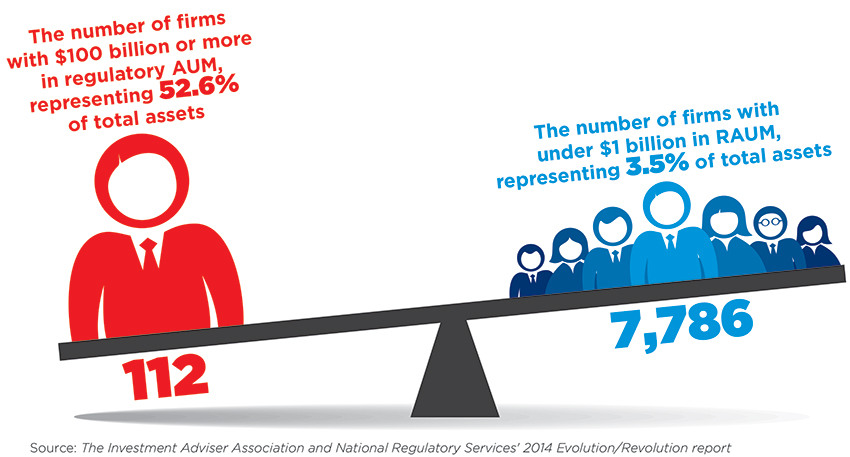 Meanwhile, the smaller firms are growing in number. This year, there were 7,786 firms managing less than $1 billion in assets, compared to 7,656 advisors in that category last year. But the $100 million to $1 billion asset category reported the largest increase in advisors, increasing from 5,867 firms in 2013 to 6,085 in 2014. Some of that growth is likely driven by breakaway brokers who are setting up their own RIAs, said David Tittsworth, president and CEO of the IAA.

“I think there is a maturation of the industry, but you still have a fairly significant number of new entrants really, these firms that are just starting out,” Tittsworth added.

“Even if they come in with $100 to $200 million in assets under management, that’s such a such a small slice of the whole pie that it takes thousands of them to really move the bar,” Gebauer said.

And as much talk as there is in this industry about practices becoming big enterprises, the report found that the vast majority of RIAs are small businesses, with 57 percent of advisors having 10 or fewer full-time and part-time non-clerical employees. About 88 percent say they have 50 or fewer such employees.

“It’s such a reach from Joe’s advisor with five people in their office in some small town America competing against one of these top, multi-trillion assets under management firms,” Gebauer said. “It’s really hard to draw a line between the two. It would be like your local diner having to compete against the biggest chain food store that exists.”