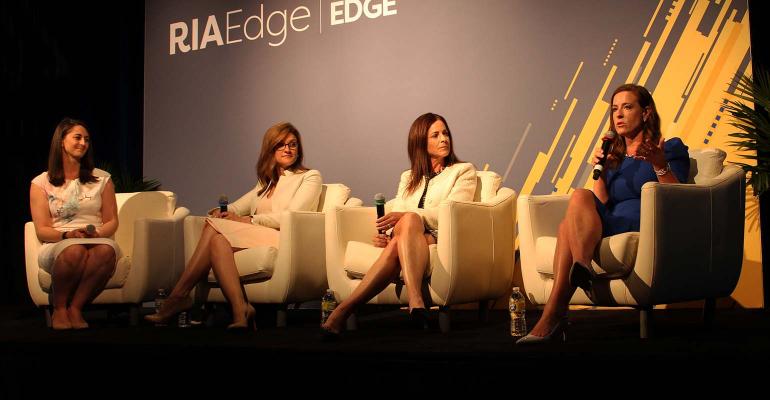 At the inaugural RIA EDGE conference held at The Diplomat Beach Resort in Hollywood, Fla., last week, the event’s RIA CEO All Star panel discussed best practices on leading and growing an advisory firm in today’s environment. And while the panel was not designed to be all-female, it did turn out that way, an indication of the strides that females execs have made in the wealth management industry.

“How long is it going to be remarkable that we have three women on this stage?” asked panel moderator Lisa Crafford, director and head of business consulting for BNY Mellon Pershing.

“I am so honored to be up here with two other amazing women,” said Eusey, who noted it was a first in her long career and that she also considered it “remarkable” that as many as 10 female CEOs were in attendance at the event. She added it was “incumbent upon everyone” in the room to ensure that parity is achieved sooner, rather than later.

All three panelists began as interns, they discovered. And each had worked her way up through the ranks—wearing different hats along the way, receiving support from a variety of places and occasionally finding themselves in positions where they weren’t always happy.

In their current roles, all three women discussed the importance of providing pathways to leadership for all employees—starting with the interns. RIA leaders should also encourage diversity, but also allow each employee to find and fill whatever role allows them to become and remain engaged in their careers and their company.

Mayhue tied this idea to continued growth and consolidation within the industry.

“When you sit down with folks at conferences like this, one of the things you can feel is that they’re worn out because they’re juggling too many things that just aren’t in their wheelhouse," she said. "One of the things we’re focused on, as far as consolidation, is offering environments where people don’t have to wear so many hats because I don’t think it’s a healthy place to be where you’re spending 60, 70, 80% of your time doing things that aren’t energizing.”

Eusey agreed, adding that starting early to provide options, education and support throughout an employee’s career creates a viable solution for the talent shortage currently seen across the industry.

Another importance focus, said all three, was ensuring that their employees have the ability to maintain a good work-life balance, while at the same time providing a space where they can make lifelong friends and take part in the firm’s internal culture—something that Fortner called “net worthwhile.”

“It’s more than just money,” Fortner said. “It’s also your time, your talent, your resources and all those things in your life that mean something to you. If they are aligned and they are working together, you are more fulfilled, more satisfied.”

Eusey recommended regular employee engagement surveys to assess and potentially adjust the culture around changes in an organization.

Mayhue said being aware of where a firm is at in its evolution provides both challenges and opportunities.

“We're a compilation of firms that have come together,” Mayhue said of Merit. “And with every new partner that we bring in, we say that we're a new firm because there's great things that come with those new partners, but we also have our core at the center. I think it would be worth saying that you can reinvent yourself.”

Coaching is also important when leading a growing firm, Fortner said. And it’s not just internal coaching, but also investing in external professionals who can be available to leadership at all levels, guiding them on how to train their staff and providing ongoing feedback.

Corporate leaders must also be open to receiving coaching themselves, she added.

“I think it’s critical for everybody,” she said, sharing an experience she had with “reverse coaching” when a woman of color in her organization provided a “safe space” for her to “ask the hard questions” when national events were bringing up concerns around racial injustice.

The women also discussed the overall importance of financial literacy and why that made their jobs so crucial to the communities they serve. Fortner said it was difficult conversations around finances in her childhood home that inspired her to pursue degrees in both finance and counseling.

Eusey noted that an online educational tool offered by Beacon Pointe (initially developed for interns during the pandemic) has received an unexpected level of community engagement and even brought in new client referrals.

When asked for their advice for those in attendance, Eusey said: Plan for succession, which enables leaders to make way for next-generation talent, and to not be afraid to lean on those around you, at the conference and beyond, for advice and insight.

“People are willing to share,” she said. “I love that about our industry.”

“Personal development,” said Mayhue. “When you look at where your business is today, you shouldn't be doing what you're doing a year from now if you're truly growing and leading your firm the way that it should be.”

“I think we all are technical experts in what we do,” responded Fortner. “I think the next phase of our industry is: Are you going to be an expert in humans?”

“I think the takeaway here is to create a community of people that trust and respect you,” Pershing’s Crafford said. “And it doesn't matter what size of firm you are now, because one day you might be here.”