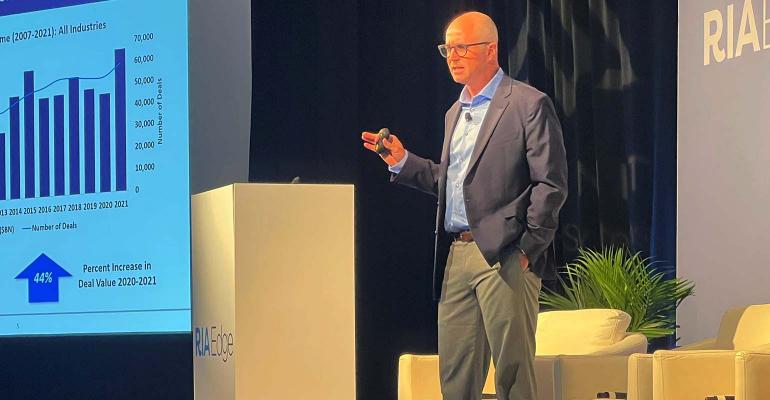 Seivert: RIAs Need to Make 'Internal Adjustments' to Maintain Value in Down Market

Speaking at the recent Wealth Management EDGE conference, the RIA deal-maker said the math points to a 15% market decline reducing a firm’s valuation by 46%—unless internal adjustments can be made.

Despite all the headlines announcing that mergers and acquisitions activity in the registered investment advisory space has been shattering records year over year for the past eight years, Daniel Seivert, CEO and founder of the consulting, valuation services and investment banking firm Echelon Partners, says the number of deals still isn’t anywhere near the levels one should expect.

Seivert gave a presentation on M&A activity and valuations during the RIA EDGE 2022 conference at The Diplomat Beach Resort in Hollywood, Fla., last week, during which he spoke about deal volume within the rapidly shifting RIA channel, major trends associated with buyers and sellers, and how to value a firm and structure a deal in an uncertain market.

Given the size of the growing RIA channel, currently estimated at around 17,000 independent firms, Seivert said that 5% of firms seemed like a reasonable fraction to be actively engaging in M&A transactions—but, in fact, only half of that number are doing so.

“There has been some commentary about the fact that M&A volume is high and it’s going to level off,” he said. “But we're of the belief that there's years and years of pent-up demand, and that we're just going to see a continued increase of this activity—particularly with the increase of buyers and the increase in the valuation multiples.”

Seivert said he is often asked whether this is a buyer’s market or a seller’s market. It’s currently a little of both, he said.

“We've seen a nice mix where the sellers have a good amount of power, and, certainly, the larger they are, the more power that they have,” he said. “But the buyers, particularly the larger ones, are not changing the terms in their deals. And oftentimes those terms favor them.”

Seivert said he often must work with sellers to challenge buyers regarding things like clawback provisions and earnouts that could benefit the seller or representations and warranties protecting the buyer.

Seivert also noted that, while the field seems full of potential buyers, the actual number of firms willing to go the distance and pull the trigger on an acquisition is much smaller. He broke buyers down into two types:

Larger buyers, typically those with more than $5 billion in client assets and who have established M&A teams, are growing at a significant pace. These firms are usually backed by private equity partners who can help them put together multiple deals a year. There are only about 40 or 50 of these firms, said Seivert, but they’re the ones doing the vast majority of transactions.

Smaller buyers, he said, usually have lead advisors and corporate staff working on their M&A transactions while also taking care of clients and running their firms, causing deals to be completed at a much slower pace. This becomes exacerbated when market volatility forces those advisors to turn more of their attention to clients and other business concerns.

“In this market, what we're seeing is that it feels like there are a lot of buyers, but, in reality, there are just those professional buyers and a lot of the other buyers that say they're interested, but when it comes to putting together an LOI, they're either slow or late, or they don't show up.”

While Echelon might have more than 500 potential buyers in its database for any given transaction, he said, it's finding that fewer than 50 actually make it to the table.

On the seller side, Seivert said the current market conditions and macroeconomic events are affecting the deal-making process, which he says entails five discrete steps: an evaluation period when decisions are made whether to sell externally or keep the transaction in-house, as well as what to do about next-gen partners; the development of a potential buyers list and marketing materials aimed toward them; evaluation and due diligence around the letter of intent; the actual signing; and, finally, the integration and earnouts after closing.

Current market conditions have caused only around 10% of firms to pause M&A transactions at any of those first three points in the process, he estimated. They have also provided an opportunity at the marketing stage for firms to promote the strengths they have as a firm that can help them to weather volatile markets, perhaps highlighting other advisory services they bring to the table that are less focused on investment management.

Market volatility also causes firms to want to dive deeper into due diligence. “There's a high heightened sense that there's more risk,” said Seivert, “and that they better be careful about what it is that they have and how sticky the clients are.”

The weighted score is then multiplied by a proforma adjustment of the income statement, found by subtracting operating expenses from total revenues, to arrive at the firm’s value. Adjustments can be made, he said, based on any number of factors, including whether employees will be leaving, next-gen partners will be buying equity or other deals are expected to occur prior to closing.

Seivert concluded that a 15% market decline could reduce a firm’s valuation by a full 46%—unless internal adjustments are made.

“What did wealth management firms do when we had our big downturn in 2008–2009?” he asked. “They made adjustments. Some of them reduced staff, some of them stopped hiring. Very few of them increased their prices, but some of them did that. A lot of them reduced their cost structure in any way that they could.”

Looking back at that period, Seivert noted that industry valuations dropped by almost half, yet he guessed that less than 2% went out of business and asked if anyone knew of another industry with “such amazing durability.”

Right now, he said, "While they are nearing all-time highs, [valuations] are not necessarily on par with where they should be with respect to the growth rate of a firm.”

“What we end up doing most of the time is we have a compromise,” said Seivert. “We take the most recent quarter, and we annualize that. And then we use the expenses over the prior year. And that's a nice combination. Usually, we can get buyers and sellers to agree on that. Until we have a situation like what just happened in this last quarter, where things were down 16% or more in the equity markets.”

Current market movements end up disadvantaging the seller while creating a sweeter deal for the buyer under that compromise, he said. “So, one of the compromises that we've been using for this is to average the fourth quarter and the first quarter.”

“I'm not worried at all," Seivert said, while acknowledging the concerns many professionals are feeling about the latest market fluctuations.

“The bottom line that I'm trying to share with you is a lot of our seller customers and a lot of our buyers are not worried at all. They believe in the long-term upward trend in the market.”