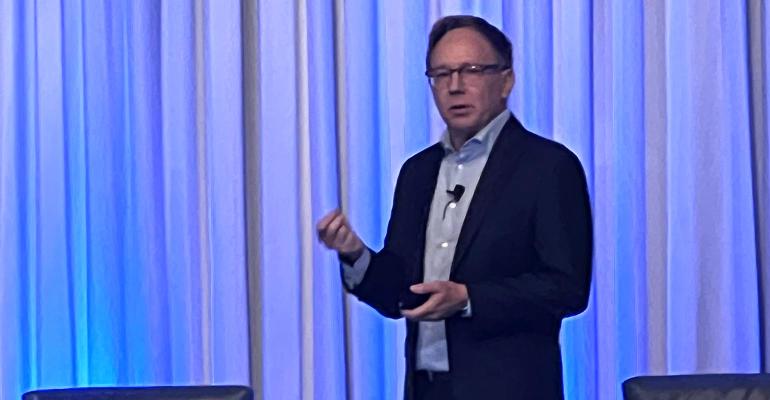 As a years-long record-breaking growth streak in M&A begins to slow, smaller RIAs are stepping up.

Mergers and acquisitions activity among registered investment advisors has maintained a steady pace through 2022 and is on track to set another, albeit less breathtaking, record, according to the latest quarterly report from DeVoe & Company, San Francisco–based investment bank and RIA M&A consultant.

Experts widely agree that dealmaking among the industry’s largest consolidators has slowed in the face of market and global instability, but DeVoe reports that increased activity among smaller RIAs will likely push total volume to a new annual record in 2022.

It remains to be seen whether Q4 2022 will rise to the quarterly record of 76 transactions, which was set in Q4 2021 and represented nearly a third of the year-end total, but DeVoe predicts 2022 will end the year 12% to 20% above last year with between 270 and 290 completed deals.

“Ten percent to 30% year-over-year increases are much healthier than the extreme clip of last year’s 50% increase,” said founder David DeVoe, who noted that the steady top-line numbers do not capture some interesting subtrends.

Most notably, the number of sellers with less than $1 billion in AUM rose 54% over the same time last year, from 92 to 142, accounting for around 70% of total transactions year to date. Ninety-three of those were firms with less than $500 million, 46% of the total YTD deal volume. This reverses a two-year trend in which firms with more than $1 billion AUM were the most active sellers. 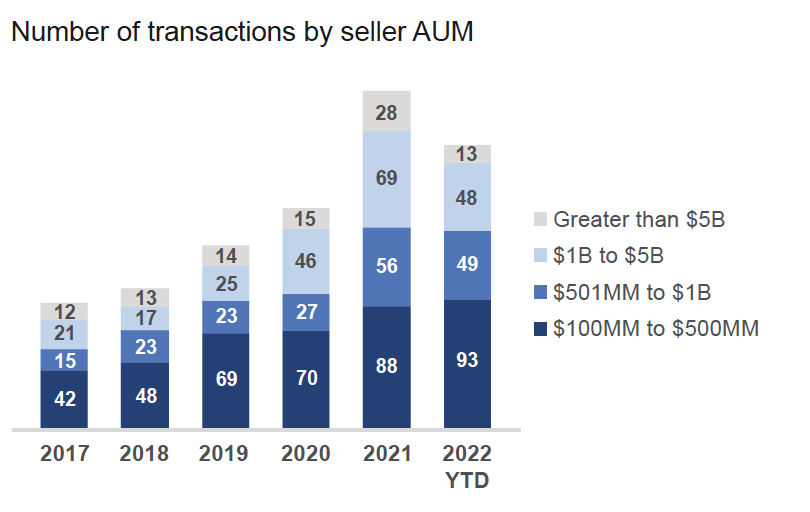 The DeVoe report suggests this is at least partly because small, would-be sellers were unable to focus on negotiation during the pandemic due to more limited resources and increased client and logistical demands. Post-pandemic, these firms have been less daunted by market conditions and remain eager to sell before the next market crisis or global catastrophe causes dealmaking to be back-burnered once again.

The number of sellers with between $1 billion and $5 billion in assets has also increased over the same time last year with 48 transactions, but grew at a considerably slower rate than the previous two years. Meanwhile, the sale of firms with more than $5 billion in assets dropped nearly 50%, accounting for just 6% of YTD transactions with 13 completed, down from 21.

On the buy side, consolidators—firms with a business model based on acquiring RIAs—still make up the majority of M&A activity, executing 52% of transactions through the first three quarters of the year with a total of 105. Mercer Advisors, Mariner Wealth Advisors, Merit Financial Advisors and Wealth Enhancement Group each completed at least three transactions in the third quarter alone.

DeVoe places RIA buyers into four distinct categories: consolidators; other RIAs; banks; and an “other” category that includes any transactions that don’t fit under the first three and ended up accounting for about a quarter of Q3 transactions.

“New entrants and existing strongholds contributed to the [other] group’s 50 transactions in the first three quarters of 2022,” according to the report. “This represents a 43% increase over the 35 transactions executed in the same period last year.”

LPL Financial’s purchase of $5 billion RIA Boenning & Scattergood and Kudu Investment Management’s acquisition of $2.7 billion RIA GenTrust were both offered as examples of “other” transactions, as was the acquisition of $3.9 billion Gladstone Wealth Partners by Integrity Marketing Group, a newcomer to the RIA market.

Another interesting trend proved to be a surge in subacquisitions, or acquisitions by firms that have been acquired themselves or have majority owners. With about 40 deals done, more subacquisitions have been completed in the first three quarters of 2022 than in all of 2021—and the Q3 volume was 90% higher than Q3 2021. As subacquisitions tend to be smaller (with an average size of $538 million AUM versus $986 million for all other transactions), heightened activity among this cohort has contributed to the compression in seller size, according to the report’s authors.

“In this category, there are over a half-dozen parent companies that are currently active, including Wealth Partners Capital Group, Focus Financial, Hightower and Kestra Financial,” they wrote. “WPCG is a prominent investor and acquirer in the industry, and several of its partners have become active acquirers themselves. Four of its partner firms—MAI Capital Management, EP Wealth Advisors, Merit Financial Advisors, and Warren Averett Asset Management—are active in the RIA marketplace. With these four partners’ recent RIA acquisitions, WPCG has doubled the number of sub-acquisitions it supported in just three years.” 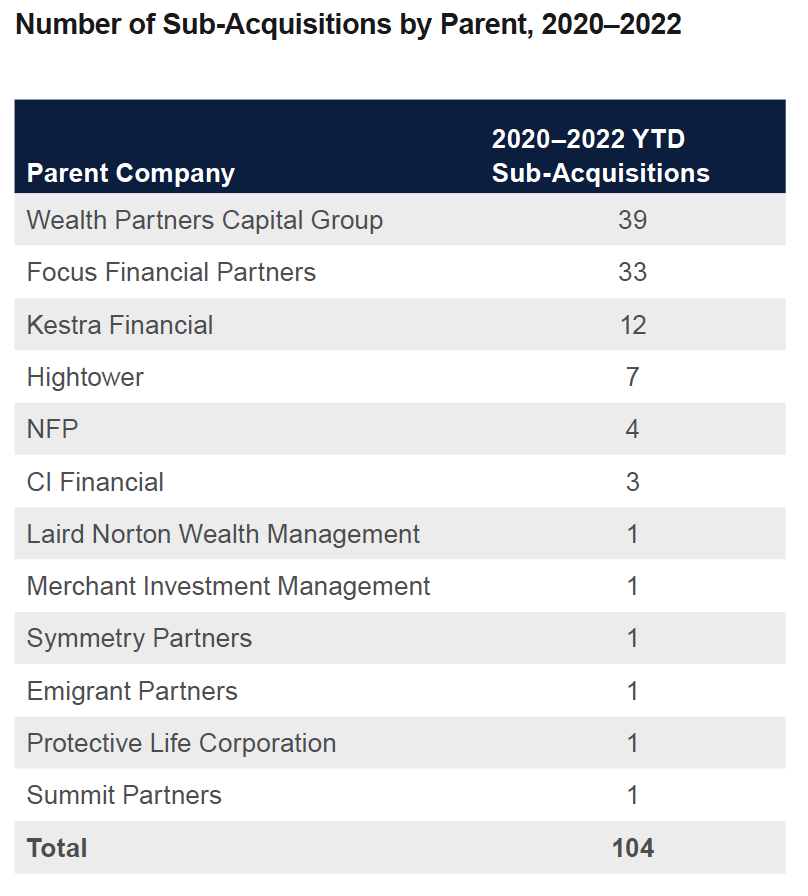 Included in the quarterly report were nuggets of wisdom shared by industry leaders at the DeVoe & Co. M&A+ Succession Summit held in Chicago last month. An admonition to be prepared before going to market came from Mercer Advisors’ Dave Barton, the importance of differentiation and “knowing your flavor” was offered by EP Wealth Advisors’ Brian Parker, and industry veteran Mark Tibergien advised firms to focus on developing talent and becoming “the employer of choice.”

Tibergien spoke this week on a virtual M&A panel with Robertson Stephens CEO Raj Bhattacharyya, Republic Capital Group Partner Peter Nesvold and Fidelity Institutional VP Scott Slater, where participants echoed many of the findings in the DeVoe report and offered their own insights.

“Aggregation for aggregation’s sake is probably not going to continue for much longer,” said Bhattacharyya. “I think more and more buyers, even the serial acquirers, are probably very focused on the right fit to create better value.”

“I think it is fair to say that buyers are becoming more selective,” said Nesvold, noting it’s not uncommon for the most active buyers to have as many as 15 or 20 firms under letters of intent.  “When you have that kind of deal flow, it just forces you to start to become more selective. We’re not seeing busted auctions, to use the banking term. Everybody's still finding a home.”

“Obviously there's a ton of consolidation,” said Bhattacharyya. “And a lot of firms are getting much, much bigger. I think it's very important to understand why [you’re doing] a merger or an acquisition and how one plus one is going to equal three. Is the client experience going to improve? Or is this purely a financially motivated transaction?"

“If you can't answer the question beyond a financial motivation,” he maintained, “it probably is not a good deal.”

“Although a deceleration in transaction volume has occurred, M&A activity is still robust and nearly sure to break another record," concluded authors of the DeVoe Q3 report. "At any given time, the confluence of so many volatile factors—U.S. interest rates, market volatility, labor market, supply chain challenges, slowing global growth and a U.S. recession—could affect the delicate balance of M&A supply and demand.”