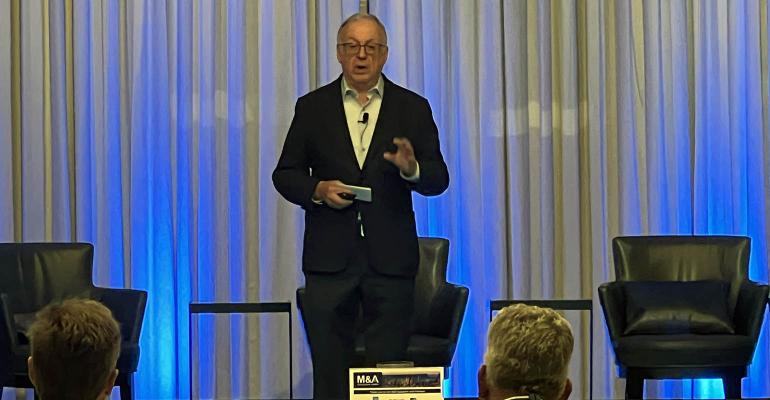 It's More About Market Domination, Not Diversification, in the Shifting RIA Space

Retired CEO of Pershing Advisor Solutions Mark Tibergien on what it will take for growing RIAs to thrive as consolidation shapes the future of wealth management.

While the RIA space is still highly fragmented, there are major players emerging, and consolidation will continue across the market. But the major players will emerge, not because of their diversification of services, clients and geographies, but rather their domination in those areas, said Mark Tibergien, consultant and retired CEO of Pershing Advisor Solutions, at the DeVoe M&A+ Succession Summit in Chicago last week.

“There was a time when we used to say there would be 10 giant RIAs,” said Tibergien. “Now, I don’t know about that, but what we will see is companies that are dominant by a certain demographic, by a certain type of client, perhaps even by a certain geography.”

Tibergien said that what’s happening in the registered investment advisory space is part of a cycle experienced by every other industry, and that major players emerge each time an industry fractures into smaller parts.

“There are literally thousands of small businesses in this industry,” he said, noting that around 2,000 of the nation’s nearly 15,000 RIAs now have more than $1 billion in client assets and approximately a third of those are corporate-owned. “It's highly fragmented but what happens is strong firms emerge, strong leaders emerge, well-capitalized businesses emerge, and they say, ‘You know what? I can take all these little fragments and aggregate them into a more powerful company.’ And so they begin consolidating.”

Related: What’s Ahead for Tibergien, RIAs and Pershing?

It’s inevitable, he suggested, that the consolidators will ultimately consolidate among themselves.

As the fragments begin to fall into place, Tibergien said it’s important for RIAs with plans for sustained growth to set themselves apart in their chosen market with the goal of becoming one of the top three recognizable brands in that market. “However, you define it,” he said. “By geography, by demographics or by other characteristics—if you’re one of the top three firms in your market, you will have twice as many opportunities to do business as the fourth-best one.”

“The industry is going through a transformation and really setting the stage for what we hope will be the next phase of wealth management from a fiduciary standpoint,” he said.  “And the opportunity to achieve market dominance is great, but you have to be clear as to what market you're talking about.”

Tibergien said there were few firms that have successfully managed growth from that perspective, suggesting that issues around overdiversification, integration insufficient growth planning, and too little focus on targeting and developing the best talent are inhibiting true organic growth opportunities that firms should be unlocking through M&A.

“I think that we have a challenge with a lot of companies being overdiversified.” Tibergien said, suggesting that concentrating resources can help firms to make a greater impact. This requires disciplined decision-making around all aspects of how a company positions itself and the services that it offers without becoming distracted by larger industry trends or expanding into too many disparate areas, he said.

Tibergien recommended identifying a firm’s primary motivator, optimal client and differentiated specialties to establish a clear position in the marketplace and then to consider where those specialties and other capabilities can be combined through M&A to make an impact in a defined space.

“I've already talked about the benefit of market dominance,” he said. “That should be the goal. If you can clearly define your optimal client and you can define which business you're in, then the question is whether or not you can become one of the top three firms in that market to serve those types of clients.”