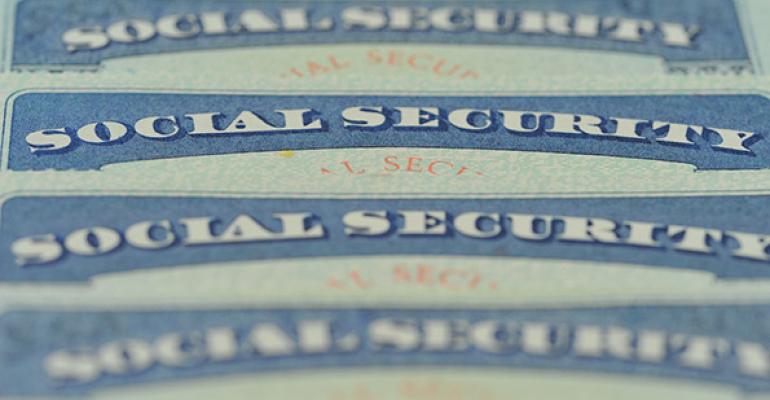 What are the most common errors advisors make when guiding their clients on Social Security decisions?

A growing number of advisors have added Social Security planning to their practices in recent years, and that’s good news for their clients. Social Security is the most important retirement benefit for most households, and making smart decisions about claiming can be a game changer.

“With rising life expectancy, Social Security will be your clients’ most important financial asset, but many advisors tend to focus only on the monthly benefit amounts,” she says.

This year, the average monthly Social Security benefit is a pedestrian looking $1,666, which adds up to just short of $20,000 annually. But, over a 25-year retirement, that totals nearly a half million dollars, and the benefit is adjusted along the way for inflation. Most people working with financial advisers also will have considerably higher benefit amounts.

“Advisors should think about Social Security as a large lifetime asset, and plan for it with that in mind,” she adds. “They do understand the importance of decisions about claiming earlier or later, but it’s important to think about the decision in the context of the client’s other financial resources.”

Married couples should have a coordinated claiming strategy, and survivor benefits are a key reason.

When a spouse dies, the survivor is entitled to receive the greater of her own benefit or up to 100% of the spouse’s benefit, including any cost-of-living increases earned along the way. Maximizing the survivor benefit is an especially important consideration for women. Men not only tend to be the higher wage earners but also generally die at younger ages than women. In many cases, a delayed filing by a man can be a critical way to boost lifetime retirement security for older women—a time of life when savings may be diminished.

Couples have a range of options. But, most often, couples will benefit if the higher-benefit spouse delays filing to earn delayed credits. A coordinated delay strategy increases the odds that lifetime benefits will be greater.

Spousal benefits are reduced for those who file before their own full retirement age (FRA). For example, a spouse whose FRA is 66 could receive 35% of the worker’s unreduced benefit at age 62. The amount of the benefit increases at later ages up to the maximum of 50% at FRA. Unlike workers’ benefits, spousal benefits are not increased beyond that spouse’s FRA.

“If you have a couple that are the same age and have similar earnings histories, that’s fairly straightforward,” Shedden says. “But that’s not typical, and many different strategies can come into play to make sure couples aren’t leaving money on the table.”

But the test often creates confusion for advisors and clients, Shedden says. “It’s been an especially challenging issue during the pandemic, with many people either losing or switching jobs and claiming benefits because they needed the income,” she says.

“Even though the benefits are not lost, there’s a lag time between when wage income is reported and Social Security withholds. Sometimes, Social Security winds up over-paying people, and the client gets hit with a request to pay back benefits.”

Some public-sector workers are in for a rude awakening when they retire: their Social Security benefits will be cut substantially compared with the projections provided over the years by the Social Security Administration.

The Windfall Elimination Provision (WEP) is a little-understood Social Security rule that, along with its cousin, the Government Pension Offset (GPO), can mean very sharp benefit cuts for workers who participate in public-sector pension plans.

The WEP and GPO were enacted as part of broader Social Security measures taken in 1983 to avert a solvency crisis. The intention was to eliminate an advantage in the Social Security benefit formula enjoyed by people who also had pensions from jobs that were not covered by Social Security. But the underlying logic is inscrutable to all but policy analysts and actuaries.

The Congressional Research Service calculates that for a typical middle-income worker with 20 years of Social Security credits that became eligible to receive her benefits in 2021, her expected Social Security benefit of $1,057 would be cut to about $559.

“When you look at a client’s primary insurance amount on their Social Security statement, it won’t account for these offsets, and they are large,” Shedden warns.

Benefits Can Be Taxed

“Many people don’t realize their benefits may be taxed,” Shedden says.

“The tax and financial professionals may not even be asking clients about the other sources of income that could trigger Social Security taxes, such as tax-deferred retirement accounts,” she adds. “So there's a real opportunity for tax professionals to get involved—strategies are available that can help maximize Social Security include and minimize taxation.”