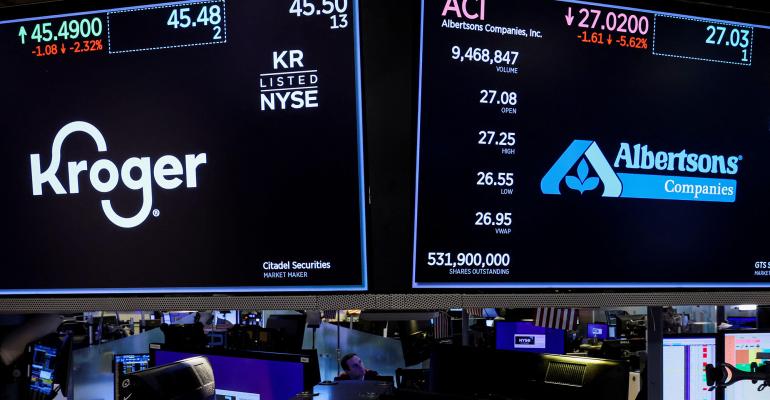 The deal reinforces the appeal of physical stores and will likely bring up the value of centers currently anchored by Albertsons, according to brokers.

The proposed merger between supermarket chains Kroger and Albertsons has become the latest sign of a reshuffling in the ranks of anchor grocery tenants, creating a new reality for shopping center landlords.

Last week news emerged that the nation’s second largest grocery chain Kroger agreed to buy Albertsons in a deal valued at $24.6 billion. Together, Albertsons and Kroger currently operate a total of 4,996 stores under various brand names, 66 distribution centers, 52 manufacturing plants, 3,972 pharmacies and 2,015 fuel centers across 48 states and the District of Columbia. Kroger has 2,723 stores in 35 states under such brands as Ralphs, Fred Meyer, Smith’s and King Soopers. Albertsons has 2,273 in 34 states and the District of Columbia, including Safeway, Tom Thumb, Vons, Pavilion, Jewel-Osco and Acme.

The deal is expected to close in early 2024 subject to regulatory approval over antitrust issues by the Federal Trade Commission and Department of Justice. The U.S. Senate has already warned it plans to hold a hearing regarding the competition concerns arising from the merger, which would give the combined company 19 percent of the country’s grocery market, reports Forbes. Kroger and Albertsons have announced they expect to make store divestitures, and Albertsons said it’s prepared to establish a subsidiary SpinCo.

That would be spun off prior to the merger closing and operate as a standalone public company that could use a variety of strategies from operating properties, selling them or closing the stores and getting value for the real estate. Both grocers will work together to determine which stores would comprise SpinCo., which is estimated to include between 100 and 375 stores.

Related: Grocery-Anchored Shopping Centers Remain in Demand. But They Are Going Mostly to Private and All-Cash Buyers.

“If you take a simple look at the maps that show their portfolios and you go and match that up with historical transactions of a similar nature, in order for it to pass FTC as well as their own internal analysis, you’re definitely going to wind up with a certain number of assets that are going to be excluded from the transaction,” says Daniel Taub, a senior vice president/national director, retail, with real estate services firm Marcus & Millichap.

The merged companies would have a high concentration and overlap in the Mid-Atlantic, Midwest, Southwest and Pacific Northwest markets, Taub says. Some stores in those markets might be closed because it could be cheaper to pay rent for an unused property than to stock the store, employ staff and continue to manage operations that are not profitable.

Sales per sq. ft. will be one of the most important factors for deciding which stores to close, but the decisions will also depend on concerns about giving up market share to a competitor across the street, says Margaret Caldwell, investment sales broker at Northmarq, a provider of capital markets services for the real estate industry. Caldwell notes there are some Kroger and Albertsons stores within close proximity of each other on the West Coast.

Kroger tends to have weaker presence in parts of Texas, portions of the Midwest, Northern California and the corridor from Philadelphia to Boston where Albertsons exists, but there are few Kroger stores, says Taub. Generally, Kroger’s sales per sq. ft. are 10 to 20 percent higher than Albertsons. Kroger will want to improve on that and closing under-performing stores is one way, says supermarket analyst David Livingston. The issue is that grocery stores leases in shopping centers are usually up to 20 years long and if a store closes, the grocers are still on the hook for the rent.

“The FTC doesn't allow companies to just close or sell off the weak stores,” Livingston says. “They must sell both the good and the bad store to competitors. When they sell off the overlap stores, the remaining stores will improve in sales as loyal shoppers move to other locations.”

Kroger will likely hold off on selling stores to strong competitors like Walmart Market and Whole Foods even if they are the highest bidders, Livingston predicts. The company will want to sell the stores to the least competitive grocers in the market and weak, undercapitalized buyers using borrowed funds at a high interest rate “is a recipe for disaster,” Livingston notes.

He worries what will happen if hundreds of stores are sold, as he expects, to lesser competitors. Many of them may not survive a year after the transaction, which would leave behind empty real estate.

In addition, “I read how they are creating a new company called Spinco that will buy the excess stores, have capital and good management to compete,” Livingston notes. “Yeah right. Create your own competitor. The fox is going to build a hen house and make sure it’s fox-proof.”

Spence Mehl, a principal at RCS Real Estate Advisors, doesn’t share Livingston concerns. “The FTC makes those determinations of divestitures and if they look in the market and see four to five particular Albertsons-Kroger stores in a particular market and want competition, they will tell them to sell that store as a supermarket,” Mehl says. “Although there’s a tremendous amount of overlap, 48 percent of Albertsons stores [are] within three miles of a Krogers. There will be a lot of divestitures here. I’m hearing numbers from 300 to as high as 450. But I don’t think there’s going to be massive closures in this situation. There could be some, but I think it will be de minimis.”

The leases from the current stores would likely be assigned to another grocer, according to Mehl.

Kimco Realty, North America’s largest shopping center REIT, released a statement speaking highly of the merger. According to Conor Flynn, Kimco’s CEO, the sale “provides a meaningful source of capital at a time when capital is at a premium for the industry. It will also provide an additional capital source to fund new investments and unique opportunities,.”

According to Taub, another shopping center REIT, Phillips Edison & Co., has more potential exposure to the merger because it operates in secondary and tertiary markets, whereas Kimco over the years has continued to higher growth markets and more primary and top-tier secondary markets.

“The reason that it matters is as you go into secondary and tertiary markets there’s only so much grocery dollars that can go around and not a lot of growth in those markets,” Taub says. “It’s not like Florida, Atlanta or Charlotte with growth that can support more grocery dollars. If you’re in a secondary or tertiary market in the Midwest or in a slow-growth market and your grocer closes, then it’s highly unlikely that you will be able to backfill that grocer with another name brand grocer.”

On the other hand, since grocery store operators tend to control their properties for decades, an operator closing the store could mean being set free from below-market rents and other restrictions, according to

“For good real estate, this could be a tremendous opportunity to unlock a lot of that stuff,” Menick says. “If I have a shopping center encumbered by one of these leases at $4 per-square-foot rent in a $12 per-square-foot market and good one at that with activity, I’m thrilled to get this back. Grocery stores are anchors and know they’re anchors and hold a pretty heavy hand and will dictate what will happen with that shopping center such as no build areas, restrictions on certain types of uses like a bakery or pharmacy. Unlocking all of those on a piece of real estate that’s good and marketable is very valuable.”

The big picture outlook from the transaction is positive for commercial real estate, says Taub. It is “validating the physical nature of grocery stores” since Kroger is seeing operational opportunities in new geographic corridors. Plus, many shopping centers will welcome the merger because Kroger has better credit than Albertsons, and that will make their assets more valuable, Taub adds.

“You are decreasing your risk, enhancing your credit and increasing the value as a result of Kroger being the ultimate guarantor on the lease. It lowers the cap rate and creates more long-term security not only with the anchor but small [shops]. The makeup of the portfolio gets enhanced.”

Editor's note: In the original version of this article, we misidentified Phillips Edison as a non-traded REIT. In fact, Phillips Edison had its initial underwritten IPO in July 2021 and is now traded under the symbol PECO. We apologize for the error.
TAGS: Investment Leasing News
0 comments
Hide comments
Related
Sponsored