/sites/all/themes/penton_subtheme_wealthmanagement/images/logos/footer.png
Recent
Recent
April 2021 Digital Edition
Apr 13, 2021
RIAs That Excel at Technology Do Not Look Like Tech Firms
Apr 13, 2021
Bally’s to Acquire Tropicana in Las Vegas for $150 Million
Apr 13, 2021
Should You Start Newsjacking?
Apr 13, 2021
Featured
Poll: 15 Classic Books on Investing and the Markets
Apr 03, 2020
Fifteen Must-Listen Business Podcasts for Advisors
Aug 14, 2020
25 U.S. Markets Adding the Most Multifamily Units This Year
Feb 03, 2021
The Top Colleges for Financial Planning
Oct 03, 2019
Bloomberg
brought to you by 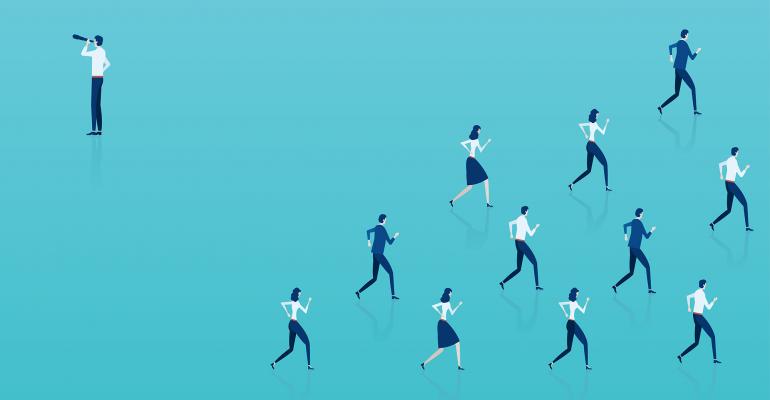 One of Ten in U.S. May Have to Switch Occupations Post Pandemic

Women, minorities, the young and the less educated will likely be the hardest hit by hallowing out of retail, hospitality and entertainment jobs.

(Bloomberg)—One out of every ten U.S. workers -- about 17 million, all told -- will likely be forced to leave their jobs and take up new occupations by 2030 as Covid-19’s after-effects destroy huge swathes of low-paying positions in a labor market that was primed for disruption before the pandemic.

Women, minorities, the young and the less educated will probably be the hardest hit by what consultant firm McKinsey & Co. foresees in a new report as an unprecedented hallowing out of low-wage work in retail, hospitality and other industries.

“Covid is a big disruptor,” Susan Lund, a Washington-based partner at McKinsey Global Institute, the consultant’s research arm, said in an interview.

The 17 million Americans are part of the more than 100 million people worldwide that the institute forecast will need to leave their jobs and enter new lines of work by the end of the decade. That will amount to about one in 16 workers in the eight leading economies covered by the study, which includes China, Japan, Germany and the U.K., as well as the U.S.

In a more-than-130-page paper, the institute sees the pandemic accelerating three trends that will continue to upend the labor market in the years ahead: more remote work and working from home; increased e-commerce and a bigger “delivery economy;” and stepped-up business use of artificial intelligence and robots.

That prompted McKinsey to lift its pre-pandemic estimate of how many workers will need to change occupations by 28%, or 3.8 million, to 17 million.

The fall-out from the virus will also make it harder for many workers to make the switch. “The transition they’ll need to make will be even larger and more daunting,” Lund said.

“It used to be the case that a lot of low-wage workers would go from fast food, say, into retail, then retail into hospitality,” she added. “But now those jobs in aggregate are declining, so most of them will have to move up to a middle-skilled job, say in an office setting or manufacturing, or even higher.”

That will put a premium on the U.S. significantly expanding the options workers have to learn new skills, Lund said.

The projected hollowing out of lower-pay positions will come after decades of polarization of the labor market which saw middle-class jobs in manufacturing and other industries decline, even as employment at the bottom and top of the income scale rose.

Another trend that could be reversed, according to Lund: the increased concentration of jobs in the world’s biggest cities that was seen after the financial crisis.

Covid-19 -- and the rise in remote working it’s brought about -- is prompting some workers and companies to decamp to smaller, less crowded cities. While office vacancy rates have surged in places like San Francisco, they’ve declined in smaller ones like Charlotte, North Carolina, according to the report.