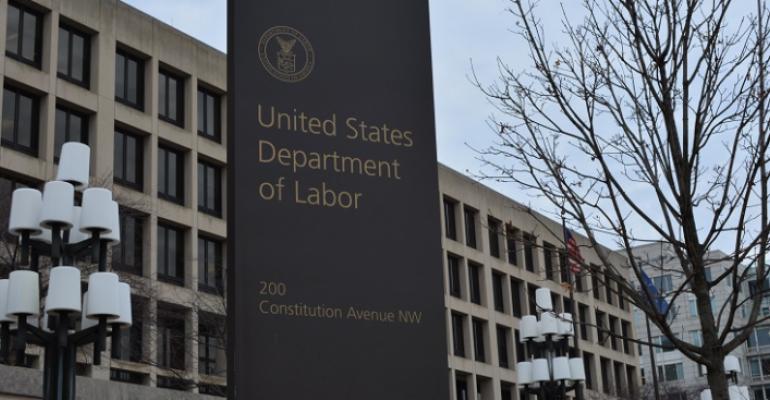 Trump's DOL Fiduciary Rule Will Go Into Effect As Scheduled

However, the Labor Department stressed that there would be "related guidance" released in the coming days, and would continue to research how the fiduciary exemption could be improved.

A Department of Labor rule that exempts some fiduciary advisors from prohibitions on certain transacations, finalized in the closing weeks of the Trump administration, will go into effect as scheduled on Feb. 16, the DOL announced today.

The rule is entitled “Improving Investment Advice for Workers and Retirees Exemption” and would allow fiduciaries in part to recieve compensation from third-parties in connection with making certain investments in retirement plans and IRAs, provided they adhere to a number of “impartial conduct standards.” The rule was meant to align the DOL’s rules on fiduciary conduct with the SEC’s Regulation Best Interest, which went into effect last June.

The DOL clarified that it would publish “related guidance” on the rule for investors, employee benefit plans and investment advice providers in the days ahead. Ali Khawar, the Deputy Assistant Secretary of Labor for the Employee Benefits Security Administration (EBSA), said the exemption would allow for stronger investor protections, including a ‘best interest’ standard of care for fiduciaries making rollover recommendations.

“We recognize that investment advice providers have been preparing for the exemption, and this step will allow them to implement important system changes,” he said. “That said, we will continue our stakeholder outreach to determine how we might improve this exemption, the rule defining who is an investment advice fiduciary, and related exemptions to build on this approach.”

The rule also asserts that the “five-part test” originally passed in 1975 governing whether recommendations should be regulated under ERISA’s fiduciary status was reinstated after the 5th Circuit Court of Appeals vacated the Obama administration’s own fiduciary rule in 2018. Under former Labor Secretary Eugene Scalia, the DOL released an initial version of the rule in June of last year, garnering criticism from consumer advocates who worried it weakened investor protections. The Labor Department released the final version of the rule on Dec. 16.

However, when Joe Biden took office, it was uncertain whether the rule would ever go into effect; by coming so late in Trump’s tenure, the rule was particularly vulnerable. There was a 60-day delay before it would go into effect which would fall under Biden’s tenure, leaving his administration the chance to put a stay on it in order to conduct further review. Consumer advocates, including David Meyer, the president of the Public Investors Advocate Bar Association, urged the Biden administration to delay the rule’s effective date when it was finalized in December.

“The DOL should adopt a new regulation, which would eliminate the need to satisfy a five-part test before someone providing investment advice would be deemed a fiduciary,” he said.

The news that the rule was going into effect was welcomed by Brian Graff, the CEO of the American Retirement Association, which advocates for retirement plan professionals and plan sponsors.

“We are pleased that the Department of Labor has decided to proceed with the new exemption, which contains important protections for plan participants and certainty for plan advisors who want to work with those participants,” he said.  “We look forward to the opportunity to work with the Labor Department as they develop guidance and continue to improve this exemption in the months ahead.”

Jason Berkowitz, the chief legal and regulatory affairs office at the Insured Retirement Institute, supported the decision to allow the exemption to go into effect as scheduled, even though the IRI disagreed with the rule’s “expansive interpretation” of the five-part test for fiduciaries.

“Our members are prepared to undertake the necessary hard work to implement the new exemption, which will require updating policies and procedures, modifying systems, training and more,” he said.

While the Consumer Federation of America did not support the rule’s adoption, it was in support of the decision to let the rule take effect, according to Barbara Roper, the CFA’s Director of Investor Protection. In a series of tweets commenting on the announcement, she said the rule was “better than nothing in the short term,” but could not be the DOL’s endpoint on the issue. She was happy with the acknowledgement that the DOL may pursue additional rulemaking, and stressed that what she perceived as the rule’s weaknesses emanated in large part from its alignment with the SEC’s Reg BI.

“But Reg BI’s chief weakness - that key terms like ‘best interest’ and mitigation of conflicts are undefined - could now be its chief strength, if new leaders at the agency interpret and enforce these requirements to the benefit of investors, as we expect they will,” she wrote. “That suggests that the best route forward will be for DOL and SEC to work together to ensure that investors get protections of a real best interest standard, and real restrictions on harmful incentives, in retirement and non-retirement accounts alike.