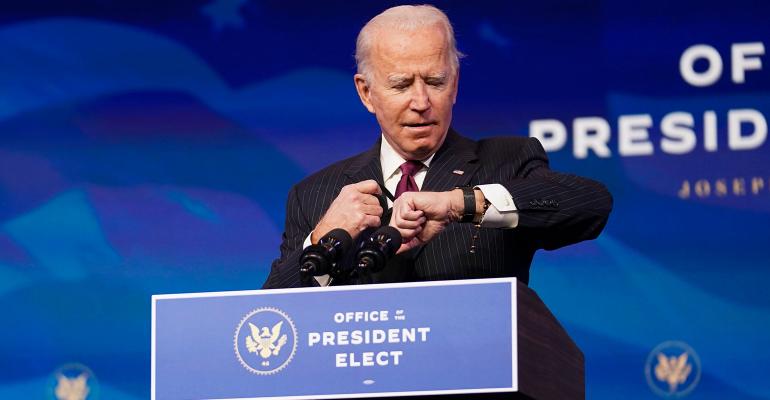 The Labor Department's final rule creating an exemption for fiduciaries on certain prohibited transactions under ERISA will go into effect after the start of the new administration.

Industry advocacy groups praised the Department of Labor’s newly finalized rule creating an exemption for fiduciaries from certain prohibited transactions under ERISA, while critics—ranging from consumer protection advocates to Democratic senators and congressmen—urged President-elect Joe Biden to keep the rule from ever taking effect.

The rule, which essentially reinstated the 1975 “five-part test” to determine whether an investment recommendation to a client in a retirement account would be covered by ERISA's fiduciary mandate, was finalized by the DOL on Tuesday after passing final review by the White House’s Office of Management and Budget.

The rule states that the recommendations from fiduciaries that meet the test—essentially, that advice is given for a fee, on a regular basis, with a mutual understanding that the advice is the primary basis for an investment decision and is individualized—will be considered fiduciary advice and are exempt from rules against prohibited transactions, provided the fiduciaries adhere to a number of “impartial conduct standards.”

Critics contend that by using the 1975 criteria and carving out exemptions for prohibited transactions, the rule lowers the bar for what would be considered true fiduciary advice to owners of retirement accounts.

According to Labor Secretary Eugene Scalia, the exemption aligns the DOL’s expectations for retirement advice with the compliance mandated by the SEC's Regulation Best Interest (both Scalia and SEC Chair Jay Clayton co-authored a Wall Street Journal op-ed published around the time of the rule’s release).

Max Schatzow, an attorney with Stark & Stark’s Investment Management and Securities Group and the author of the investment advisor blog AdviserCounsel, said the exemption attempted to create a rule closer in line with how financial professionals operate their businesses.

There were some notable changes from the proposal, including a new disclosure requirement during rollover recommendations where an agent would need to provide clients with a specific reason for why they made that recommendation.

Supporters of the final rule included the Securities Industry and Financial Markets Association (SIFMA) and the Insured Retirement Institute (IRI), with the latter praising the DOL for creating a rule that aligns with both Reg BI and the National Association of Insurance Commissioners’ model best interest rule currently under consideration by several states.

“The exemption is a step forward as it will encourage a variety of investment advice approaches and it will provide retirement investors with the services they seek,” SIFMA President and CEO Ken Bentsen Jr. said in a statement.

David Meyer, the president of the Public Investors Advocate Bar Association, criticized the DOL for its ‘breakneck’ pace in finalizing the rule, with only 30 days to comment on the proposal, a three-day period to submit requests to testify at a public hearing and a speedy turnaround at the OMB. Meyer said the department had canceled meetings with consumer protection advocates while meeting with several industry groups before finalizing the rule.

“PIABA urges the incoming administration to delay the effectiveness of the rulemaking and to review the steps taken by DOL to push through this gift to Wall Street,” Meyer wrote. “The DOL should adopt a new regulation, which would eliminate the need to satisfy a five-part test before someone providing investment advice would be deemed a fiduciary.”

In an emailed statement, U.S. Sen. Patty Murray (D-Wash.) and U.S. Rep. Robert C. Scott (D-Va.) excoriated the DOL for a rule they argued would hurt workers and retirees by enabling “unscrupulous financial advisors” to place their interests ahead of clients.

“People are looking for reliable help as they try to navigate the painful economic fallout of this pandemic—but this rule will make that unbiased help even harder to find,” they wrote.

The question is now what will happen to the rule in the incoming Biden administration. The final rule states it will go into effect 60 days after publication in the Federal Register (which hadn’t yet happened as of press time). That 60-day delay ends in the early days of Biden’s tenure, which means the new president would have the power to put a stay on any regulation not yet in effect to conduct further review. These types of regulations passed near the end of a presidential administration are known as “midnight regulations,” according to Carol McClarnon, a partner with Eversheds Sutherland.

“This has happened with a number of past administrations, where they try to get as many things done in the last few days of the administration,” she said, adding that the Biden administration can delay the effective date of the regulation so they can continue to review it.

But this means the exemption may never actually take effect. The five-part test could be a different case, as the DOL argued that it was automatically reinstated after the 5th U.S. Circuit Court of Appeals struck down the Obama administration’s expansion of ERISA’s fiduciary definition. McClarnon said the Biden administration might eventually revisit the five-part test, and it was also likely that they’d move forward on their own fiduciary rule.

“A new administration could go back and just make a whole new rule. It wouldn’t be the 2016 rule, but they could make a rule that didn’t violate the court decision in 2016,” she said. “But it would have to go through notice and comment, a lengthy process.”

Schatzow expected the Biden administration would place a delay on the rule for review and perhaps seek more public comments. Afterward, he believed Biden’s DOL would move forward on withdrawing or amending it.

“I’m sure there’ll be a lot of lobbying between now and then about what’s going to happen,” he said.