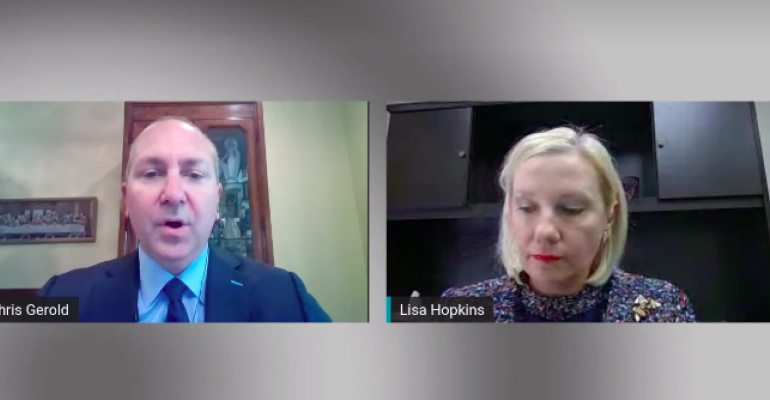 Incoming NASAA President Lisa Hopkins said the expansion of private markets without proper regulation and transparency is a 'potential breeding ground for fraud,' during the organization's virtual annual conference.

The incoming president for the North American Securities Administrators Association’s (NASAA) board of directors said she felt the SEC's recent change to the accredited investor definition marked a "missed opportunity" during a conversation held at the opening of the association's annual conference.

“The expansion of private markets without commensurate regulatory tools and transparency is troubling, and a potential breeding ground for fraud,” she said.

Hopkins also announced that Maryland Securities Commissioner Melanie Lubin is the next president-elect for NASAA and will take over when Hopkins' tenure concludes approximately one year from now. During the discussion with Gerold, Hopkins spoke about the COVID-19 crisis, hoping that she and Gerold would be the only two NASAA presidents forced to preside during a pandemic, and said that Reg BI implementation would be an additional priority for NASAA, in addition to the continued investor expansion into private markets.

The two-day conference, which was being held virtually due to the pandemic, included a preliminary assessment of how Reg BI's implementation was faring. Many panelists stressed that it was too early to determine the ultimate efficacy of the rule, including Ira Hammerman, an executive vice president and general counsel with the Securities Industry and Financial Markets Association (SIFMA), which represents broker/dealers and dual registrants. He said that while the rule wasn’t “perfect,” broker/dealer firms were making efforts to mitigate conflicts for products like mutual funds.

“Firms took a critical look at the cost structure of various products they offer,” he said. “If there were mutual funds way out there on the spectrum in terms of their cost structure, firms have taken steps to eliminate high cost mutual funds from the various offerings they make available to their clients.”

Several panelists, including Hammerman; Gail Bernstein, the general counsel at the Investment Adviser Association; and Barbara Roper, the director of investor protection at the Consumer Federation of America, acknowledged many of these debates have been long-lasting. Bernstein noted that investment advisors had not had much cause to amend their product offerings in light of the new rule, as investment advisors already tended to shy away from offering riskier, complex products.

Roper noted that one of the CFA’s chief concerns was that if the key elements of the best interest standard remain undefined, how would the SEC be able to enforce it? She pointed to the SEC’s share class self-disclosure initiative, arguing that if some firms were being tripped up even on the most stringent standards, it might not bode well for their compliance systems.

“I am not saying no firms are doing this well, but we shouldn’t assume that strong compliance should be the norm,” she said.

Roper also argued that enforcement measures would have to go further than those share classes to indicate the SEC was up to the task of rigorously pursuing rule violations.

“If share class is the bold frontier of enforcement, that’s not nothing, but it’s not a meaningful best interest standard,” she said. “If this is really going to protect investors, it has to be looking at strategies and services, not just in one mutual fund, but mutual funds more generally and across product categories.”

Hammerman noted that while some may prefer the investment advisor model, he said Chairman Jay Clayton had made clear that preserving investor choice remained important in the drafting and implementation of Reg BI.

“Not every customer wants to hand over discretion to manage their account on a day in day out basis, and pay a significant fee for that discretionary management,” he said.