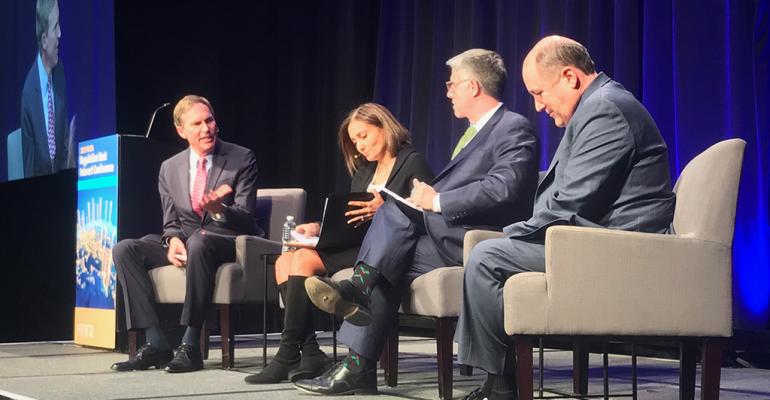 Regulators stressed they'd be looking for 'good faith' efforts from firms in achieving compliance as the implementation date for the SEC rule arrives in June 2020.

With Regulation Best Interest’s implementation set for June 30 of next year, there remains a question that’s not yet answerable, according to Mark Cresap, the president of Cresap Inc., and it could have a massive impact on the brokerage industry.

“We have all these concerns, but the thing we don’t know is how Reg BI is going to be enforced. If regulators come in guns blazing, it’s going to be very difficult to maintain the transaction-based model,” he said at FINRA’s Regulation Best Interest conference in Washington, D.C. “So a lot of this depends on what is now unknowable, which is how regulators are going to approach this in the examination process.”

But in a little more than six months, brokers will begin to find out, as the implementation date arrives. At the conference, which attracted hundreds of brokers and compliance officers from throughout the country, FINRA and SEC regulators detailed what they would be looking for in the early days of Reg BI’s enforcement.

According to John Polise, the associate director of the Broker-Dealer and Exchange Program at the SEC’s Office of Compliance Inspections and Examinations, brokers need to understand that regulators would not be playing “gotcha.”

“I think I would say we’re mostly looking for good faith efforts in trying to comply with the rules,” he said. “Now, there’s a continuum here. If we go into your firm and say, ‘how are you doing with BI compliance?’ and you say, ‘what’s BI?’...that’s going to be tough.”

However, Polise said that starting on July 1, firms should not be surprised if an examiner arrives inquiring about compliance.

According to Scott Gilbert, the vice president and district director at FINRA’s New York District Office, firms should expect examiners from his regulatory agency to be testing that firms are complying with the four mandated obligations (disclosure, care, conflict of interest and compliance), and FINRA would use “typical examination methods” familiar to firms, including interviews, document requests and testing, to evaluate compliance.

Additionally, some exams’ review periods would encompass time before and after the implementation date, and that while they will judge firms’ behavior before implementation under the suitability standards, firms should not think that they will not address “traditionally unacceptable behavior” in the runup to Reg BI.

“When we say things like ‘good faith,’ we have to mean it. I think in the first round there will be much less ‘you did this wrong’ and more ‘how about this?” Polise said. “You’ll always have a tradeoff between ‘I want a strict rule’ and ‘flexibility.’ There’s a sweet spot we’ll have to find together, and we are all in this together.”

In the next several months, the SEC will be including questions on their exams of firms to help firms assess how they’re progressing toward implementation, according to Peter Driscoll, the director of the SEC’s Office of Compliance Inspections and Examinations. Additionally, the commission would likely publish findings drawn from examinations in the first year of implementation to give firms more opportunities to achieve compliance. Driscoll said he was already seeing firms starting to gauge how the rule would change their practices.

“We’re seeing positive movement, at least from my perspective, on people engaging in this and trying to get it right,” he said. “I’m not panicked.”

In the past, SEC regulators have repeatedly stressed that brokers shouldn’t expect a delay in implementation, and Alicia Goldin, a senior special counsel in the Office of Chief Counsel in the SEC’s Division of Trading and Markets, told conference attendees there were “no plans” to delay the date when firms must submit a Form CRS (which is also June 30).

Nevertheless, Tim Howard, a compliance officer with BancWest Investment Services, said he thought a delay was quite possible. According to Howard, creating the Form CRS and writing new policies and procedures would not be the most burdensome aspect of implementation. Instead, he said it was proving difficult to assess the appropriate level of disclosure when detailing conflicts of interest.

According to Wendy Lanton, the chief compliance officer for Lantern Wealth, smaller firms like hers may face greater hurdles in attaining compliance, particularly in how they keep records of client interactions, recommendations and trades. While larger firms may be able to document everything in house, smaller firms may need to rely on their clearing firms. But if clearing firms do not supply the ability to do that, it can make things very difficult for smaller brokers to keep pace.

Lanton, who called Reg BI “the most sweeping change” she’d ever seen in the industry, said that while the rule had good ideas, she wished it had been implemented in a more piecemeal fashion.

“We have to find a way to make it less clunky, and we can’t raise fees on customers,” she said. “We live in an industry of price compression.”