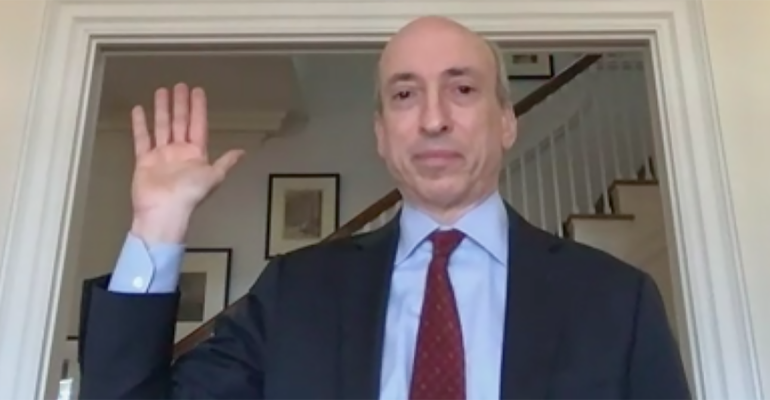 Gary Gensler, President Joe Biden’s nominee to lead the Securities and Exchange Commission, said investors increasingly “want to see climate risk disclosures” when weighing potential investment opportunities, and that his enforcement priorities would include protecting senior investors and going after Ponzi schemes if he were confirmed, speaking during a nomination hearing before the U.S. Senate Committee on Banking, Housing, and Urban Affairs Tuesday.

Gensler, who was nominated to succeed former Chair Jay Clayton, testified remotely before the committee, which also included testimony from Rohit Chopra, Biden’s nominee to be director of the Consumer Financial Protection Bureau (CFPB). Senators questioned Gensler on the need for disclosure of diversity (or lack thereof) in corporate boardrooms and about the role proxy advisory firms play in the proxy process. During his testimony, Gensler said he expected climate risk disclosures would aid more than investors.

“I think issuers would benefit from such guidance, so I think through good economic analysis, working with the staff, and putting it out to the public to get feedback on this, this is something the commission, if I’m confirmed, would work on,” he said.

Several Republican senators, including Sen. Pat Toomey (R-Pa.), were skeptical that relatively minor financial expenditures by corporations in political spending, for example, should have to be disclosed to investors. Gensler noted that the Supreme Court had already defined materiality and did so in a way that benefited investors.

Toomey also raised his misgivings about agencies participating in what critics have called “regulation by enforcement,” in which they argue a regulatory body uses enforcement to try and affect compliance, akin to following a rule without having to go through that extensive process. In a petition last year, the Financial Services Institute criticized the commission’s Share Class Selection Disclosure Initiative as an example.

Sen. Steve Daines (R-Mont.) expressed concerns that the SEC was basing enforcement actions on previous settlements or guidance, and asked Gensler to clarify when enforcement would be appropriate, as opposed to guidance or rulemaking.

“If there’s a rulemaking, that’s very different than enforcement. [Enforcement’s] about using the facts of the law and resources to change market behavior,” Gensler said. “If there’s a bunch of small fraud shops, you have to go after them, but after the first four, five or six you go after, maybe the others start to clean up their behavior.”

Gensler detailed his thoughts on the recent GameStop saga, arguing the rise in no-fee trading platforms offered greater access for novice investors but also raised new challenges for an agency predicated on the tenet of investor protection, particularly in how to help investors when apps “gamify” the investing process.

“It raises this interesting question about, what does it mean when balloons and confetti are dropping and you have behavioral prompts to get investors to do more transactions on what appears to be this free trading app, but then there’s this payment behind the scenes, this payment for order flow?” he said. “I think we’re going to need to study that and see what it means for our marketplace.”

Regulation Best Interest’s implementation and other issues affecting advisors were not raised during the course of the hearing.

Gensler’s nomination received support from the Consumer Federation of America and the North American Securities Administrators Association (NASAA). In a letter to the committee, NASAA President Lisa Hopkins cited Gensler’s tenure as the head of the CFTC during the Obama administration and his role as chairman of the Maryland Financial Consumer Protection Commission as evidence that he would focus on the SEC’s “traditional” role in protecting investors.

“This is critical, given the abundance of issues the SEC presently confronts that directly implicate ‘Mom and Pop’ investors, including but not limited to the scope and size of the private offering framework, and the implementation and potential revision of Regulation Best Interest,” she wrote.

But representatives from the Competitive Enterprise Institute wanted senators to question Gensler on his regulatory approach, with Research Fellow Richard Morrison warning that SEC proposals for ESG goals could “choke off capital flows to industries that are legal yet politically disfavored.”

“They should also encourage him to not roll back recent liberalizations of the ‘accredited investor’ rule to allow knowledgeable, non-wealthy investors to invest in early-stage private companies and to look at liberalizing the rule further to promote more equality of opportunity among investors,” he said, referring to last year’s rule that expanded the accredited investor definition.

Committee Chairman Sherrod Brown (D-Ohio) said senators would have until Friday to submit additional written questions, with responses from Gensler and Chopra expected by the following Monday, saying the reason for the shortened time period was to move on nominations quickly.