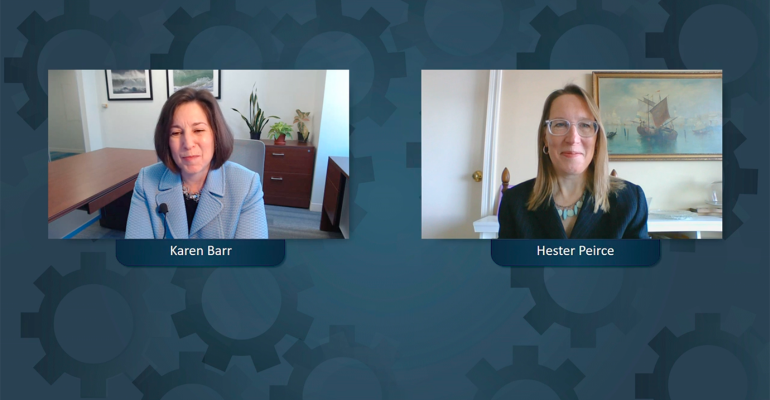 One day after the Securities and Exchange Commission announced an enforcement task force focused on ESG and climate-related issues, Commissioner Hester Peirce said she hoped the agency would provide guidance for issuers, advisors and firms before commencing enforcement actions. She also reiterated her belief that the recent spate of SEC announcements on ESG issues largely were a continuation of work that was already being done.

The comments came out of a conversation with Karen Barr, president of the Investment Adviser Association, at the group’s virtual Compliance Conference this week. In recent weeks, the SEC announced that its Division of Corporation Finance would “enhance its focus” on issuers’ climate risk disclosures and that ESG issues would be one of the 2021 exam priorities. Peirce said investment advisors and asset managers running funds understood they have to be upfront with clients about objectives, how they’re achieving them and that they had to match reality.

But, referring to a statement she released with fellow Commissioner Elad Roisman after the task force was announced, Peirce questioned what would happen with enforcement efforts.

“We can bring cases like the ones that seem to be envisioned with the announcement, but the concern is to the extent it’s designed to be a follow on to what Corporation Finance is doing or potentially taking on enforcement recommendations from exams, you’d hope that we’d provide the guidance before we start bringing the enforcement actions,” she said. “So I think part of the statement we put out was to say, ‘if there’s really going to be a sea change, the commission needs to be involved in whatever that sea change is.’”

In addition to these developments, the SEC recently named Satyam Khana as the senior policy advisor for climate and ESG, working out of the office of Acting Chair Allison Herren Lee. Also, in his testimony before the U.S. Senate earlier this week during his confirmation hearing, SEC Chair Nominee Gary Gensler was asked repeatedly about climate risk disclosures, noting that it was something investors increasingly wanted to see. But when considering guidance for issuers’ climate risk disclosures, Peirce believed many discrepancies were already being picked up by the commission’s “principles-based regime.”

“It takes a lot for me to think that we need to get to the point of having very specific disclosure mandates for anything,” she said. “I’m open to those conversations, and certainly open to hearing why a particular metric might be appropriate to be considered by every company across every industry, but I think that’s a pretty high bar to meet.”

Peirce also said she hoped the SEC would wait for results from exams before considering reopening SEC’s Regulation Best Interest or its fiduciary duty and standard of conduct. While she said the SEC always needed to be open to reviewing rules, Reg BI was very new, and the SEC had worked with firms preparing for implementation. She said it was sensible to see how the current rule worked with firms before deciding if anything needed to be amended. Peirce also worried about what she perceived to be some firms’ overtly-dense Form CRS, which was implemented along with Reg BI and intended to supply consumers with a succinct summary of the relationship between themselves and their advisor.

“It becomes a compliance exercise in some ways,” she said. “I’m not trying to judge and haven’t done a comprehensive survey of Form CRS, but that was the initial feedback I heard. And that makes me worry that people are spending their innovative juices on trying to make sure they’re complying with all of the requirements of it instead of actually thinking about what is the objective here, which is to get people to a place where they really understand what the firm is providing to them, or if they need to go somewhere else, and what they can get at this particular firm."