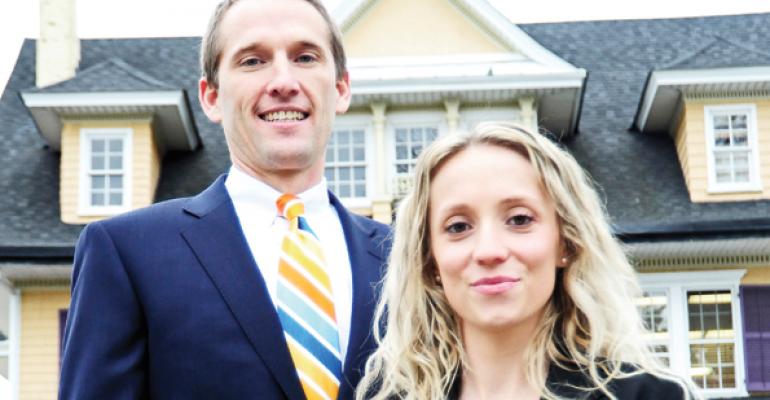 A New Jersey advisor thought he had the perfect match for a junior partner, until she got cold feet about moving into the client spotlight. Our panel of experts helps them reconcile opposing goals.

An independent advisor spent years looking for a junior associate, to no avail. A year or so ago, he hired someone with intelligence and promise and assigned her operations work with the goal of grooming her to become an advisor. After a year, she says she doesn’t feel ready for that role. What else can he do to help her? Or should they decide to keep her in her current role?

Jim Parks started Parks Wealth Management, in Ridgewood, NJ, in 2000.  Of the four other people at the firm—including his wife Felicia, who is director of client services—he’s the only one in a revenue-producing role working directly with clients. His has some $70 million in AUM.

For the past five years Parks has tried to recruit someone to be a junior advisor at the firm to work with existing clients and help free up his time to tackle other projects. He’s gone through the Financial Planning Association of New Jersey and other organizations, but he wasn’t finding anyone who fits the bill. It’s not a matter of compensation. He’s never gotten far enough along to discuss pay at all. Parks says his firm is very “high-touch and service oriented” and he’s met people—advisors working with banks, for example, or life insurance reps—who don’t meet his criterion.

Then, in January, Ania Bielicka, a local resident with experience in institutional financial services operations, saw the job posting on a website. Four years out of college, she was working for Goldman Sachs. When that firm moved her department to Salt Lake City, she didn’t want to go. Parks hired her.

She has focused on account paperwork and client communications. She sits in on client meetings and produces detailed notes, and assists with creating financial plans. She’s also taking an online Certified Financial Planning course, as well as several other classes through LPL, the firm’s broker-dealer and is getting her securities licenses.

But Bielicka simply isn’t ready to make the leap to being a hands-on advisor. “I’m happy right now with what I’m doing,” she says. “I love my role, which still is very new for me.” Bielicka thinks she eventually will assume an advisory spot—but she isn’t positive. “It’s day by day,” she says.

Parks doesn’t have a definite date at which Bielicka needs to make the leap. He remembers when he started out in the 1980s and had questions from clients he simply couldn’t answer.  Though he feels she’s very talented, he’s not quite sure how to help Bielicka gain the confidence she needs. “I want to create a career plan she’s comfortable with,” he says. “How do you get someone out of their comfort zone level if they’re a bit shy and don’t have the confidence to think they can do it?”

Just as a point of general advice, targeting whom one is hiring is an important strategy. This advisor hired someone who was an operations person by background, without client-facing experience. If he could do it over again, I would say he should target someone who is an advisor. Although he’s shopped around, I would think there are lots of advisors who would fit the bill. I understand he has a high-service orientation. But there has to be someone.

I would target people who, to put it bluntly, might be struggling, who have set up their own shop and have maybe $5 million in assets. I think that person would say, “I’d love to join this firm. I’ve been meeting clients and that’s what I want to keep on doing.”

He’s turning this person into a front-line advisor. It may work. But it may not be her natural proclivity. You have to make sure you target whom you’re hiring.

At the same time, it seems like he’s doing all the correct things to help her. Training, participating in client meetings—that’s the right way to do it. You learn by watching what happens in client meetings for a certain period of time, maybe a year or two—by watching someone who already is an advisor. If this person is going to make it, this is the right strategy.

But I think he should think out of the box. He wants someone to take over his clients so he can do other stuff. And she has, indeed, freed up a lot of his time so far. I’m suggesting he hire another one of her, a person who can help with the bulk of operations and participate in meetings with the advisor. I see staffs that are responsible for 99 percent of what get in front of the client. But that last hurdle of the relationship management involves very sophisticated skills. If a staff member can do almost everything leading up to the meeting, that will free up a lot of the advisor’s time.

He has the right person. She just has the wrong “self-talk”. That’s the number one reason people fail—self-talk that stops them from being effective or trying something. In this young woman’s head, she’s saying to herself she can’t do it. She’s not ready. It’s a matter of helping her to reach her unrealized potential.

You can help a person change. The best way is through coaching. Here’s a simple example. Say a person wants to improve his golfing. First, you ask him to write down the exact words he’s thinking. They might be “Don’t hit the ball into the water.” When you say that in your head, you create an image of smashing that ball into the water. But the mind only knows to react to that immediate imagery. Instead, he should say, “I need to put the ball right down the fairway.” Once we know what the mind is saying, we can assess whether the thought is positive, negative or neutral. If it’s negative, we work on changing the words to different action-oriented statements, and then repeating them, understanding that you’re going to backslide at times.

It’s important to understand she doesn’t have to change all her behavior. It’s just for the situation with the client. We call it “situational behavioral flexing”. You train people to do it when they need to, not all the time.

It’s not easy to turn an administrative or operations person into a client service one. That’s especially true if the employee isn’t comfortable with or interested in that activity. You can lead a horse to water but you can’t make it drink.

But if there’s a basic interest in taking on the role, you can train someone to become more comfortable. We’re all uncomfortable doing new things. The key is to slowly but surely introduce new responsibilities to the job description.

Typically, the career of an advisor is built in four stages. First is mastering the technical aspects-- understanding the financial planning process, investment advisory analysis and so on. It takes two to three years in an advisory firm to become a good technical person. Once that technical expertise is there, the person will have the confidence to interact with clients and learn how to manage relationships. The way you do that is by being the second person in the relationship, being introduced as someone who will be instrumental in creating the plan, while working under the guidance of a lead advisor. The process can take three to five years. Then it’s time to become the lead advisor and handle client relationships independently. Generally speaking, it takes ten years before you can take on that role. The last step is developing new business, perhaps becoming a partner.

It can be very high pressure for someone with limited exposure working with clients. A typical practice has 100 to 200 accounts. That’s a lot of people to interact with. One of the biggest fears humans have is being embarrassed in public. Even a one-on-one conversation can feel like a public speaking engagement to some people.

I’ve read that judgment comes with experience and experience comes with bad judgment. You have to have a lot of experience before your judgment really starts clicking in. There’s no substitute for having seen hundreds of client situations. It takes time to master a profession. But the comfort will come. She just has a ways to go.