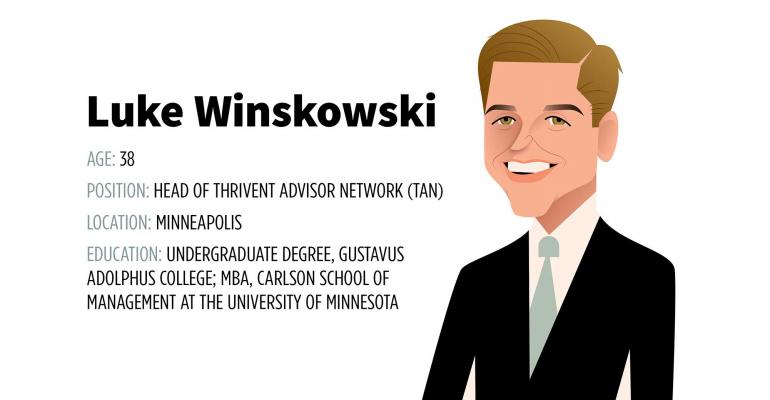 Ten to Watch in 2021: Luke Winskowski

Luke Winskowski readily admits that Thrivent's effort to rebrand itself as an advice-driven company is a “significant effort” for a legacy insurance company.

It might seem daunting to change a legacy insurance organization with roots dating back to the early 1900s, but Luke Winskowski has been working for the past two to three years to bring Thrivent Advisor Network, Thrivent Financial’s hybrid independent advisor platform, to market.

He’s done so in the middle of a pandemic, no less. Late last year, the firm brought over 130 of its own advisors from Thrivent’s legacy insurance broker/dealer and, just recently, started recruiting outside advisors.

The effort to rebrand itself as an advice-driven company is a “significant effort” for a legacy insurance company, Winskowski admits, but it could proffer a model for similar institutions to follow.

While Thrivent, structured as a fraternal benefit society, has long served the Midwest Lutheran market, in the past couple of decades it has broadened its client base while retaining a values-based component—but that’s not about socially responsible or biblically responsible investing, as that would lean toward product pushing, Winskowski said.

Rather, it’s bringing values, like religious faith, into an advice conversation, and Thrivent has learned how to do that in an institutionalized way. The firm believes that faith drives much of client behavior. Not all of Thrivent’s clients will identify as Lutheran, but Winskowski says most will by the nature of the way the firm goes to market—that includes ideals around being a good steward of money and aligning values to money decisions.

Winskowski, who is Lutheran himself, started as an intern at Thrivent in the early 2000s and eventually became an advisor. Along the way, he became the firm’s de facto expert on the investment advisory space after his team grew their wrap accounts from $10 million to $70 million in just three years.

As he built TAN, his challenge was to create a modern infrastructure, not simply to “jimmy rig” their own architecture.

When an advisor joins TAN, they come underneath the firm’s corporate RIA but operate as an independent affiliate, meaning they own their businesses and their clients. Advisors get the compliance back-office services, financial management and operations, as well as access to TAN’s technology platform. It uses Fidelity and Schwab for custody.

One big decision was not to use Thrivent’s own broker/dealer, built for a legacy insurance b/d model. They partnered instead with Purshe Kaplan Sterling Investments, a hybrid RIA-friendly b/d out of Albany, N.Y.

His next challenge will be growing the platform. The first outside team to join was 49 Financial, an Austin, Texas–based firm with over $250 million in assets, more than 60 advisors with an average age of 24 and aggressive growth plans. Another team is expected to join in the next two weeks, while a couple more are in the pipeline, which should close in the next three months. He’s also building out the business development team and will be announcing some new staff in that function in the near future.

And don’t be surprised to see TAN make acquisitions of its own in the future, he said.

“Like any firm, you can’t take what happened in the past for granted. And, absolutely, we feel it’s a commitment of ours to remain relevant for our advisor force. And if we didn’t change and evolve, I personally feel like we would lose relevance at some point and see that advisor force, or certainly their next generation that they’re transitioning to, move their business elsewhere.”