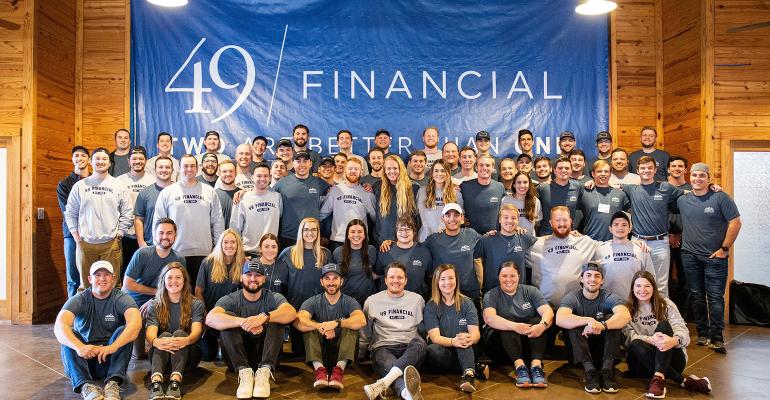 Thrivent Advisor Network’s first outside recruit has big growth plans and an average advisor age of 24.

Thrivent Financial, the Midwest-based not-for-profit financial services organization founded by Lutherans, did a soft launch of its hybrid independent advisor platform, Thrivent Advisor Network, late last year, bringing over 130 of its own advisors from the legacy insurance broker/dealer.

Now, as the parent company launches a rebrand campaign, recasting it as an advice-driven company, Thrivent Advisor Network is ready to recruit outside advisors. This week, the firm added its first outside team, 49 Financial, an Austin, Texas-headquartered team that managed over $250 million in client assets prior to joining TAN. The team has more than 60 advisors, with an average age of 24 and moves over from the insurance broker/dealer space.

Related: How Thrivent Hopes to Grow Beyond its Base of Religious Investors

“We feel it's a commitment of ours to remain relevant for our advisor force,” said Luke Winskowski, head of Thrivent Advisors Network (TAN) at Thrivent. “And if we didn't do this, if we didn't change and evolve, I personally feel like we would lose relevance at some point and see that advisor force, or certainly their next generation that they're transitioning to, move their business elsewhere.”

The “49” in the team’s name comes from a scripture in the bible that says, “two are better than one.”

“That is how we run the business,” said 49 Financial CEO Travis Penfield. “So when I started in the business, I had a mentor that helped me in my first few months in the career, which I think is kind of common when you bring someone on. And so I started to hire people that were just like me, young 20 somethings, because the industry, at least my interpretation of it, told me that it was very difficult to make it. The retention rates were very low. But maybe there's a lot of people out there that are young that actually do have the talent to do this job and have the heart to do this job and want to do this job, but just are looking for someone to say, ‘this is going to be together.’”

Penfield has aggressive growth plans, with 125 additional advisors currently in testing and expected to start in the next six to 12 months. He expects to grow to a total 225 advisors by the end of the year.

“What we have seen is if you can really invest in them, it's a model that can scale very quickly and have a pretty large impact quickly as well,” he said.

This year the firm has expanded into Houston and Atlanta, which Penfield considers “the gateway to the East Coast.” Atlanta also has many colleges in the area. He expects that presence will lead to many different offices along the East Coast.

Penfield, who’s 31 years old, has an ultimate goal of growing the firm to 10,000 advisors by the time he’s 50. “We believe that in order to do that, we're going to have to be in pretty much every major metropolitan city in the U.S.”

Penfield said he was attracted to TAN because their values were aligned, for one, meaning the firm had a holistic financial planning approach, looking more at things like a client’s life goals, aspirations and giving preferences. “They go very deep in that relationship talking about things far beyond just, just the money. That was pretty much exactly the way we view and the values we want to portray to our clients.”

He also felt there was a safety aspect to partnering with a platform RIA that’s connected a larger entity. The scalability and pricing of TAN’s technology stack was another positive.

While Thrivent, structured as a fraternal benefit society, has long served the Midwest Lutheran market, in the last couple decades, it has broadened out to serve everybody, while still having a values-based component. It’s not really about socially responsible or biblically-responsible investing, as that would lean toward product-pushing, Winskowski said.

“The problem we find with mixing SRI and BRI into that is often the advisor is making a value statement around how they want to serve and then pushing that, like wholesaling it to their clients,” Winskowski said.

Rather, for one, it’s bringing faith into an advice conversation, and Thrivent has learned to how to talk about that in an institutionalized way. The firm believes that faith drives much of client behavior.

Values also comes into play through the firm’s programs. As a fraternal benefits society, profits are funneled back through its member communities in the form of charitable outreach or programs that help people express their generosity. The firm has a partnership, for instance, with InFaith Community Foundation, a national charity that helps people establish and line up their donor-advised funding with their charitable interests and financial circumstances.

Thrivent is not excluded to Christian advisors or clients.

“We actually think about, how do you create the environment where you can be faith-inclusive and understand how that plays a role, whether that's Christian or Jewish or Muslim or whatever it might be? And that you create an environment from an employment perspective that allows people to feel very comfortable bringing their whole selves to work if that presents itself,” Winskowski said. “A lot of the Christian advisory space is much more driven around the niche and do you fit within the model and the value set. And that's not really how we think about it at Thrivent.”

The Thrivent Advisor Network has been built with the help of the initial 130 advisors that came over from the insurance broker/dealer. This is a group who had been moving towards a very advisory-driven business model.

One big decision was not to use Thrivent’s own broker/dealer, which Winskowski says was built for a legacy insurance b/d model. The firm decided instead to partner with Purshe Kaplan Sterling Investments, a hybrid RIA friendly b/d out of Albany, N.Y. That firm is well-positioned to serve advisors engaging in a lot of fee-based business.

“I think too often, older legacy firms like Thrivent try to, I call it ‘jimmy rig’ their old architecture and make it work for new models, but it ends up sub-optimal or subpar,” he said.