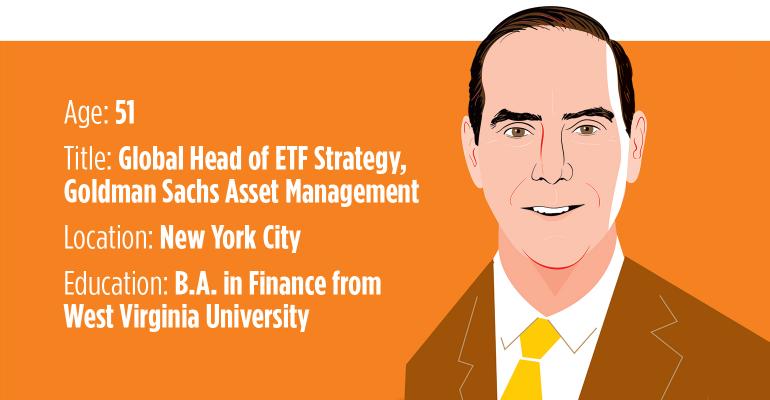 For several years, passive management has been on the ascent, aggressively taking market share from active managers, particularly for big style-box type core investment positions. For the year ending September, $295 billion has left active funds, while $454 billion has flowed to passive funds, according to Morningstar data.

The shift has pressured active managers to cut prices and in many cases launch their own passive funds, including exchange-traded products. As Morningstar ETF research head Ben Johnson has previously noted, the world of ETFs used to be “the land of misfit toys.” But not anymore – the big traditional fund managers are jumping in, including J.P. Morgan, Fidelity and PIMCO.

But perhaps nothing speaks to the trend more than the entrance of Goldman Sachs, Wall Street’s 800-pound gorilla, which recently reported $1.3 trillion in assets under supervision for its asset management and wealth management businesses.

In July 2014, the company tapped Michael Crinieri to head up its ETF business. Crinieri helped develop some of the first generation ETFs, called World Equity Benchmark Shares (WEBS), at Morgan Stanley in the mid-1990s. The firm sold those funds to Barclays Global Investors, which later rebranded them to what are now iShares.

Goldman entered the market in December 2015 with its first ETF, the Goldman Sachs ActiveBeta U.S. Large Cap Equity ETF; most notably, they came to market with something of a firesale: An expense ratio of just 9 basis points. The firm now has a total of five ActiveBeta funds, based on the company’s factor-based products for institutional investors. The firm will launch a sixth ActiveBeta ETF in the coming months.

“A lot of the initial demand really came from those institutional investors. Increasingly, as we were talking to investors about our ActiveBeta strategy, we kept getting the question, ‘Can you offer that in an ETF?’ That's why we started with smart beta,” Crinieri says.

The firm also has a fixed income ETF, with plans to launch more. Alternatives—another area GSAM is known for—will also be packaged into ETFs, he says. The firm has already filed to introduce the Goldman Sachs Hedge Fund VIP ETF, based on a research report by the firm’s global investment research division. The index tracks the 50 most broadly held U.S. equities across the hedge fund universe.

In just one year, the firm has amassed $2.5 billion across its six ETFs—not bad for a newbie. But some argue that Goldman was late to the ETF party.

“We still think that it's early days and that we'll continue to see significant growth in the industry,” Crinieri says. “Goldman Sachs is certainly not new to the ETF business. We've been one of the largest market makers and liquidity providers globally for the past 16 years.”

The firm also has the benefit of scale, he argues; the firm already runs $32 billion in smart beta strategies. That’s a big part of the reason it can charge so little. In addition, its ActiveBeta indices are proprietary, so the firm doesn’t have to pay a third-party index provider, as many ETFs do.

“Smart beta products come at a pretty significant premium to a traditional market weighted product,” he says. “We decided that we were going to price our products in line with, or in some cases, less expensive than the big market-cap-weighted products.”

Crinieri also sees an opportunity to grow the business through robo advisor platforms, which are gravitating towards ETFs. GSAM recently made its ETF model portfolios available on Betterment for Advisors’ platform.

“It's an increasingly crowded space, so I think that's the biggest challenge is just really staying in front of our clients and making sure we're providing them with solutions,” he says.