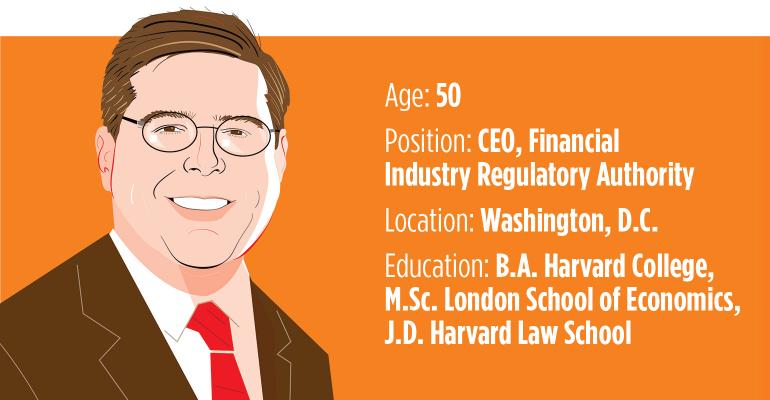 Robert W. Cook, a securities attorney and former head of market regulation for the Securities and Exchange Commission, is stepping back into the regulatory arena as he recently became head of the Financial Industry Regulatory Authority.

Cook took over the spot following his predecessor’s ambitious program to increase oversight of markets and participants, forging into new areas of scrutiny and even making a bid to take over the regulation of registered investment representatives from the SEC.

But it's doing so with expenses outpacing revenue growth—the authority pulled in $992 million in 2015; but with expenses topping $1 billion and flat earnings on its investment portfolio, it posted a loss of $40 million, compared to profits of $55 million in 2009.

Rick Ketchum, the outgoing CEO who has held the spot since 2009, is widely praised with setting the ship right after the regulatory agency failed to stop, much less warn anyone about the implosion in the center of the securities markets that nearly destroyed the entire U.S. economy in 2008. He has increased the amount of market activity the authority oversees and has expanded scrutiny to include cyber-safety and elder fraud.

But while the agency missed the big picture failures in 2008, it has dramatically increased its scrutiny of brokers and advisors—some say to a fault. Since 2011 the number of individuals barred or suspended has risen by more than 50 percent, while the number of disciplinary actions over that time frame has remained steady. Some critics call the authority’s highly promoted BrokerCheck system flawed in that it can often leave out key information alongside a broker’s regulatory record.

Cook comes to the job with, by all accounts, the right experience for the job. From 2010 to 2013 he was the director of the Division of Trading and Markets at the SEC, where he was a prime mover implementing more than 30 major rulemakings and studies generated by the Dodd-Frank and JOBS Acts. His work at Cleary Gottlieb, both before and after his SEC stint, focused on broker/dealer regulatory matters. He holds both undergraduate and law degrees from Harvard and has a Master of Science from the London School of Economics.

He has described FINRA as the regulator on the front lines ensuring regulatory compliance and praised the self-funded regulatory body for not pulling from taxpayer funds to do it.

According to securities attorney Richard Roth of the Roth Law Firm, one of Cook’s top priorities will be an emphasis on cybersecurity, including firms’ supervision and risk management practices related to technology infrastructure, including the personnel who develop and maintain it. “Failures in this area can have widespread implications for firms, customers and the markets,” he says.

Other hot topics that will need to be addressed under Cook’s first year, according to Roth: Firms’ oversight regarding compensation of registered reps and conflicts of interest, particularly around revenue sharing agreements or the sale of proprietary products and proposed rule 2273 which required client communications of educational material regarding the firms’ recruitment practices – including whether financial incentives are used and the impact that may have on clients.