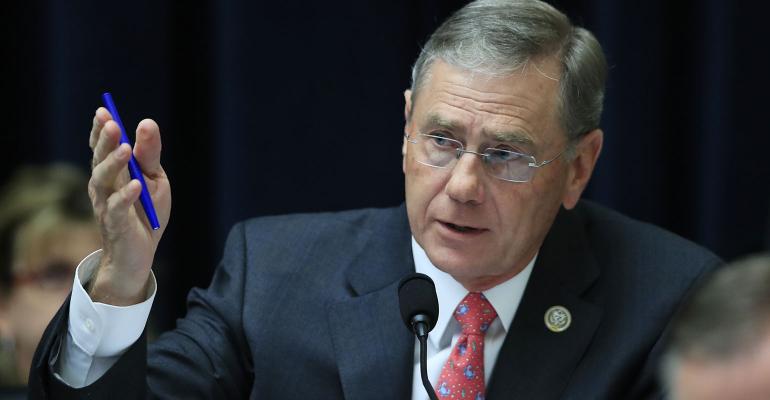 If the Republicans hold onto the House, U.S. Rep. Blaine Leutkemeyer is the front runner to head the Financial Services Committee.

WASHINGTON (Reuters) - Next week’s U.S. elections could see Wall Street’s favorite congressman assume one of the most coveted roles setting financial policy on Capitol Hill—if Republicans retain control of the House of Representatives.

With opinion polls favoring Democrats to pick up the net 23 seats they need to win control of the House on Nov. 6, vocal Wall Street critic Maxine Waters is the likely bet to take over as head of the chamber’s powerful Financial Services Committee.

But if the Democrats fail—and the party’s edge on a generic ballot has narrowed to seven percentage points as of Oct. 23, according to Reuters/Ipsos polling data—Republican Blaine Luetkemeyer, a key banking industry ally, is the front-runner to lead the panel.

A congressman since 2009 but relatively unknown at a national level, Luetkemeyer has emerged as a favorite of bankers who have found him responsive to complaints that overzealous regulation is hurting the economy.

Commercial banks have donated more than $300,000 to Luetkemeyer’s re-election campaign this year, making him the top recipient of bank cash in Congress, according to data from the Center for Responsive Politics.

In an interview with Reuters, the 66-year old congressman said experience running his family’s community bank and a stint as a state regulator in Missouri have given him a strong grasp of the industry’s complex issues.

“I’ve been at both sides of the desk. There’s very few people in Congress who have done that,” said Luetkemeyer, who owns a small farm.

Whichever party wins, Luetkemeyer’s influence on the Republican side of the finance panel will grow, as current chairman Jeb Hensarling is retiring at the end of this year.

Sources on Capitol Hill who closely follow the committee say Luetkemeyer will likely succeed Hensarling if Republicans hold the House, even though he ranks eighth in seniority among the 34 Republican committee members.

Since joining the committee in 2011, Luetkemeyer has chaired subcommittees on consumer credit, housing and insurance, and has batted for banks on issues including Federal Reserve oversight, lending restrictions and accounting rules.

“I’m a big economic freedom guy,” he told Reuters. “Our system is working. What we need to do is get the government out of the way.”

Among issues Luetkemeyer identified as priorities: overhauling the U.S. housing finance system and updating bank secrecy and anti-money laundering policies. He may also take up legislation to tighten rules on how financial firms disclose data breaches, and push ahead with a bipartisan bill making it easier for companies to raise capital.

The more contentious area of his agenda would be continuing Republican efforts to “pick away at Dodd-Frank’s overreaching rules,” as he refers to banking regulations imposed after the financial crash a decade ago, and placing additional restrictions on the Consumer Financial Protection Bureau (CFPB).

Although he would like the top job on the finance panel, Luetkemeyer said he would not pursue it if North Carolina’s Patrick McHenry, vice chairman of the committee and the House Republicans’ deputy whip, seeks the post.

In that case, Hill sources said Luetkemeyer would likely become McHenry’s second in command. McHenry said in a statement he will decide on next steps after the election.

Several lobbyists who have worked with Luetkemeyer said he is pragmatic and thoughtful, and has proved able to work with Democrats.

If he does become the top Republican on the panel, Luetkemeyer will work alongside - and more often against - Waters, a strong critic of Republican President Donald Trump.

The two lawmakers have known each other for years, and he noted that Waters also originally hails from Missouri. Luetkemeyer said that while they might be far apart ideologically, the two “can sit down and talk to each other and enjoy each other’s company.”

If Democrats take control of the House, Luetkemeyer said he could juggle the roles of chief combatant and colleague.

“We’ll be the loyal opposition when we need to be and we’ll be helpful when we find areas where we can get together with her.”