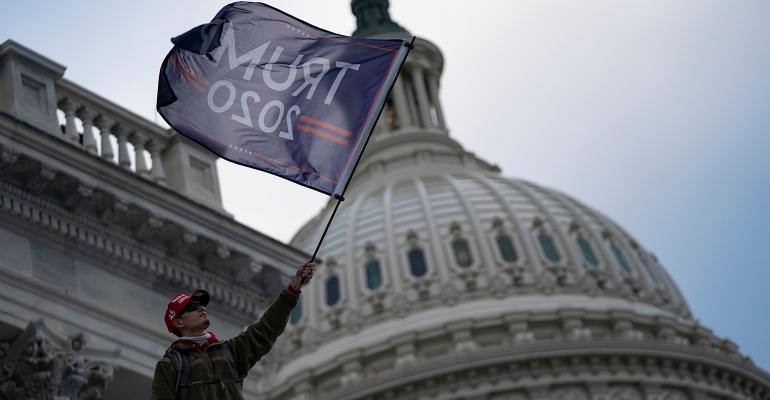 With last week's violence at the Capitol and this week's presidential inauguration weighing on Americans' minds, advisors must consider if and how politics should arise in conversations with investors.

The tumultuous events in the country have seemed unceasing, from the continued impact of the COVID-19 pandemic, to November's presidential campaign and President Donald Trump’s false claims of a stolen election, along with last week’s siege on the U.S. Capitol during the counting of the presidential contest’s electoral votes and this week’s inauguration of Joe Biden.

The acrimonious political debates over the past several weeks, months and even years have resulted in friction at workplaces and dinner tables, affecting many people’s personal and professional relationships, advisors included. Some feel that politics are verboten in dialogue with their clients. Others, like Ryan Frailich, the founder of the New Orleans–based firm Deliberate Finances, question the silence-is-golden approach. He believes it should not be surprising that advisors may feel called on to follow their own beliefs in their practice, especially when considering how fraught a discussion of a client’s wealth and financial future can be.

“I think it actually probably should be taken into account more, because if you’re doing financial planning well, it’s not just numbers and spreadsheets,” he said. “It’s feelings and values and priorities, and those things do touch politics; how could they not?”

But advisors must balance how their own values and beliefs manifest in their practices, and many have encountered moments that led them to question whether those values must always be subservient to the relationship with their client. Frailich, who describes himself as “left-leaning,” happily works with people across the political spectrum and acknowledged he has many clients who vote differently than he does. But he recently encountered a scenario in which one of his clients was generating their primary income from work with a politician that Frailich said was “prominently involved in the blatant lies” about the veracity of the 2020 election.

The knowledge gnawed at Frailich, who ruminated on the issue with several mentors and peers. To him, the issue at stake was not based upon political affiliation, but what he perceived was the calamitous impact this client’s employer was having on the country, which he believed directly led to last week’s violence at the Capitol.

“Everyone has a line and people’s lines are going to be different. I’ve been having conversations with several people over the past several weeks and months, asking them about this very situation, like, ‘what is my line?’” he said. “I was trying to figure out where my line was, and it turns out my line is insurrection.”

Frailich reached out to the client to explain his reasoning and pledged to help them find an advisor or planner who would better be able to assist them. To Frailich, it was incumbent on him to ensure that his belief that this person’s employer was harming the nation did not cloud an advisor/client relationship, and that any client deserves an advisor “who doesn’t have to bite their tongue.”

“I’m not naive enough to believe that me saying that this person has caused great harm is going to suddenly make her quit her job. This is entirely about me being able to come home, and look at my kids and know that my income is not derived in any way from activities that supported this person,” he said, though he acknowledged the client’s business generated a very small part of his own revenue. “If it was a larger client, maybe that would have influenced me. I don’t know; I hope not, but humans are humans.”

While Frailich’s situation pertained to a specific client and the actions of the past several weeks, he, like most advisors spoken to for this article, stressed that political beliefs or party affiliation were not sufficient reasons to discount a client. Noah Damsky, the founder of Marina Wealth Advisors, finds that when skirting the edges of political issues, the tension could go from “zero to 100” extremely quickly.

An unbreachable impasse in an advisor/client relationship was far more likely to spring up over behaviors rather than beliefs, according to Ben S. Lies, the president and chief investment officer for Delphi Advisers. But if an advisor found themselves in a situation where they felt they may not be the best person for that client, Lies believed it was still the responsibility of the advisor to help them find a better fit. Lies said the one-on-one relationships he enjoyed with clients starkly contrasted with the often vicious discussions he surveyed in other spheres.

“When you have a relationship with very different political views, it’s important to talk about the differences and understand one another,” he said. “I think it’s different than a lot of what the media and social media would have us believe.”

For Sarah Ponder, who started her Austin-based RIA Real Estate Wealth Planning in the past several months, she said she has had to consider what to seek out when determining whether a potential client could blossom into an ongoing relationship. Through a lengthy discovery process, she never asks about politics explicitly, but will have a general conversation about goals and values, which she said could provide context about a client’s personality and worldview.

To Ponder, she felt it was essential for her to trust that the client would be willing to accept her advice based on the information she had. If she couldn’t trust that, she said, she couldn’t trust that she would end up delivering positive financial returns for that client, and would have a liability if their investment performance was unexpected. She said the elevated belief conspiracy theories could be a potential warning sign.

“I have an MBA and am a capitalist, of course, but it’s been really clear to me in the last number of years that if you’re going to work in finance and you’re going to be giving people fair advice, it has to be a two-way relationship where they trust you, and where they are willing to understand the evidence you’re presenting to them and willing to implement it,” she said. As for Trump’s claims concerning the 2020 election, “if people are truly buying into that now, they’re probably not in the right kind of headspace where i can talk about evidence-based investing and have them actually believe me.”

Some advisors, like Karl Leonard Hicks, believe in a more stringent demarcation between their practice with clients and their own beliefs. Hicks, who is a financial planner and the founder of the Riverside, Calif.–based Leonard Financial Group, said any time a client brings up any non-financial issue, he attempts to ‘steer it back’ towards a conversation directly about their financial planning. He followed the country’s intensifying political strife with a worried eye.

“That’s unfortunately the narrative in our country right now, that if you’re not of my political belief, you’re an evil person and vying for the destruction of the country,” he said. “I think that’s crazy. ... I just don’t believe that; I think that’s a narrow, single-minded view.”

This led him to question how some advisors could bring their own beliefs into their practice and still properly service clients. If a client was of the opposite political spectrum, they should still be able to work together. Even if a client’s beliefs impacted them to the point that they were taking actions that damaged their finances, Hicks questioned whether ending the relationship was the right course of action, using a comparison with a doctor/patient relationship to illustrate his concerns.

“If you have a patient that smokes and you want them to quit smoking, you’re going to do everything you can to convince them to quit smoking, but you’re not necessarily going to fire them as a patient,” he said. “If I have someone who I think is making financial decisions that are harmful to them based on their political views, then we’re going to have a conversation about that, and it’s not about what their political views are right or wrong.”

For James Hallett, the founder of the Washington-based Hallett Advisors, there was a balance between working with all clients while operating his practice in a way that doesn’t mandate he remove his values from the conversation. Hallett has his own history in public office, successfully winning a mayoral election in the town of Port Washington. While simultaneously operating as a financial planner, he said he learned to balance how he could take public stances on controversial local debates while continuing his daily work as a planner. Since then, he’s continued to balance the political divide, even having back-to-back client discussions with the local chairs of both the Republican and Democratic parties.

“You look to who they are as people and oftentimes one can set aside, to a point, political differences,” he said. “At the end of the day, financial planning shouldn’t be a Republican or Democrat or red or blue issue. It should be about how you help people actualize what matters in their life. You can do that in a way and still be true to yourself and honor the people you work with.”

But this approach hasn’t inhibited Hallett from incorporating his political and social beliefs into his practice and outreach. Shortly after George Floyd’s murder last summer, he shared an opinion piece explaining his thoughts on the matter to his clients, and invited them to reflect on it and share their feelings. The response was generally positive, with some remarking that other advisors who would never raise that kind of discussion. Hallett believed that completely disassociating an advisor/client relationship from those kinds of issues made little sense.

“It goes to the core of who these people are; what do they believe, what matters to them, what motivates them, what excites them, what makes them angry, what propels them forward, what fears do they have?” he said. “If you, as an advisor, are shutting off a good portion of what makes us human, I would suggest you’re missing a tremendous opportunity to engage people in a very deep and meaningful way."