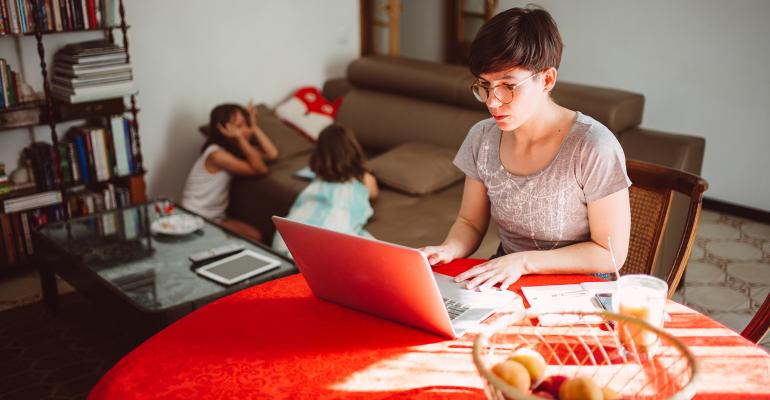 Working From Home Is Not an Urban Escape Hatch

The vast majority of the white-collar workers who had clustered in big cities and expensive suburbs before the pandemic stayed put even as they stopped going into the office.

(Bloomberg Opinion) -- The mass shift to remote work during the pandemic allowed people with professional and management jobs to do them effectively from mountaintop aeries, beachfront cottages and exotic foreign locales. Mainly, though, it seems to have enabled residents of big-city neighborhoods and close-in suburbs to avoid going to offices that were in some cases within walking distance of their homes. 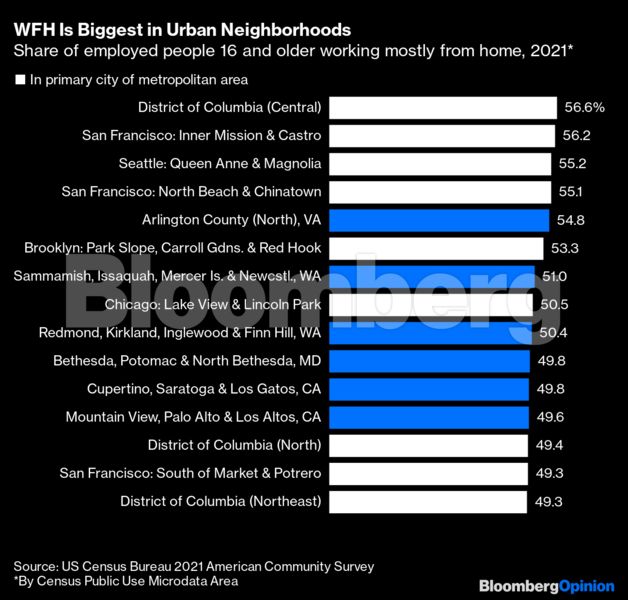 These numbers are from the 2021 edition of the American Community Survey, a sort of mini-census that the US Census Bureau sends out to 3.5 million households each year. They come in response to the multiple-choice question, asked of household members who were already reported to have performed paid work the previous week: “How did this person usually get to work LAST WEEK?”

“Car, truck or van” remained the box checked most frequently, with an estimated 75.6% of US workers getting to their jobs that way in 2021. But the percentage working from home, which had been rising slowly for years, jumped to 17.9% in 2021 from 5.7% before the pandemic in 2019. In some places, as should already be apparent from the above chart, it jumped much more than that.

The places I have chosen to focus on here are Census Public Use Microdata Areas, or PUMAs, which divide the nation into units big enough (population of more than 100,000, usually) for the Census Bureau to release microdata from which anybody can compile their own custom estimates and tables without compromising the privacy of respondents. These particular numbers are derived not from the microdata (which isn’t out yet and is released only as five-year averages in any case) but from a table published by the Census Bureau in mid-September that I’ve seen referenced by one pseudonymous Twitter user but otherwise has not received the ample attention it deserves.

A big advantage of PUMAs is that they divide diverse big cities into more coherent parts while at the same time adding together suburbs (and small towns and rural areas) that alone don’t have enough people for the Census Bureau to release their data. Sorting by PUMAs makes clear that working from home was most prevalent quite close to office centers last year. Central Washington, DC, in the Census Bureau’s accounting (here’s the map) includes the nation’s most famous home office, at the White House, as well as the Capitol Mall and the neighborhoods north and south of it, from Foggy Bottom to Dupont Circle to Adams Morgan to Shaw to the new residential developments of Southwest and the Navy Yard. In San Francisco, the Inner Mission & Castro and North Beach & Chinatown PUMAs are close to downtown and South of Market & Potrero encompasses it, as does the Queen Anne & Magnolia PUMA in Seattle. Even the more suburban areas in the above chart are home to corporate headquarters and other large office complexes, with the nation’s three largest corporations by market capitalization based in Cupertino (Apple Inc.), Redmond (Microsoft Corp.) and Mountain View (Google parent Alphabet Inc.).

Because I know you want more, and also because the margins of error here are such that the 15th- and 30th-place PUMAs are statistically indistinguishable, here are the next 15 in the rankings (I would have put them all in one chart but it got too crowded). It’s a more suburban list, but they’re all suburbs close to central cities or large office centers. 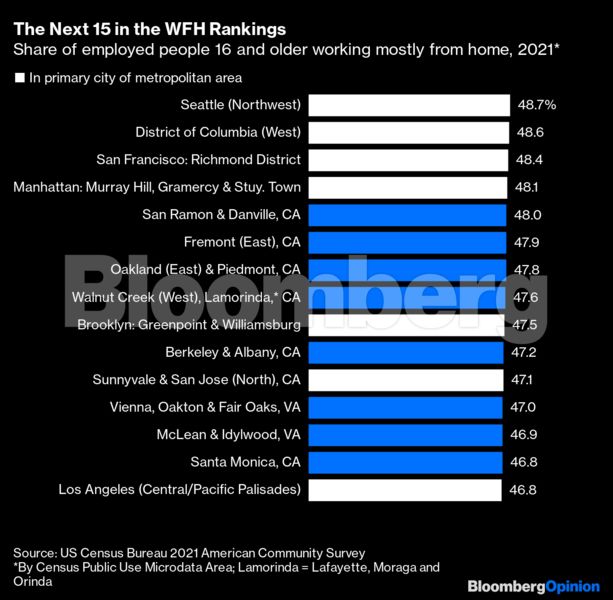 The Census Bureau also released work-from-home estimates for cities and census-defined places of 65,000 residents or more. The top-15 ranking of these makes clear why the listing by PUMAs is more informative, I think, but also highlights some more interesting WFH hotbeds in the suburbs of Seattle, Washington, San Francisco and Atlanta. 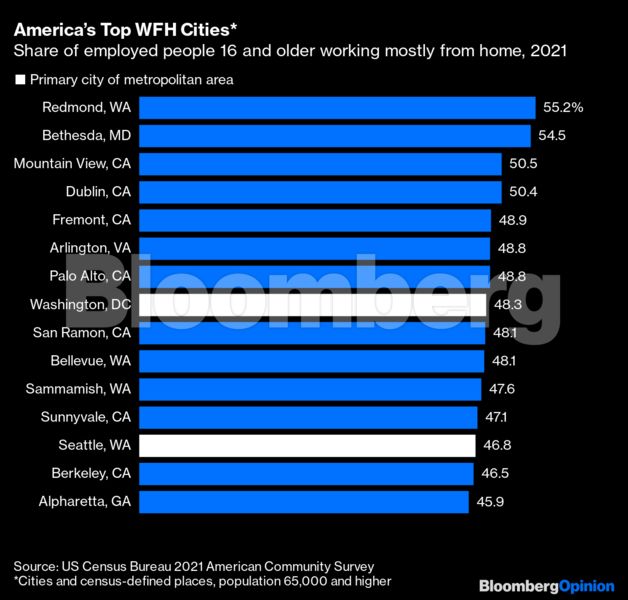 When I posted a version of this chart on Twitter a couple of weeks ago (based on a different Census Bureau table that had data only for fewer, bigger cities), a lot of people reacted with surprise that cities and close-in suburbs dominated the rankings rather than exurbs and mountain resorts. That’s partly because there aren’t many exurbs or mountain resorts with more than 65,000 people, although the PUMA statistics covering such places (the chart below shows an assortment that was chosen less than scientifically) also don’t reveal any sky-high WFH numbers. 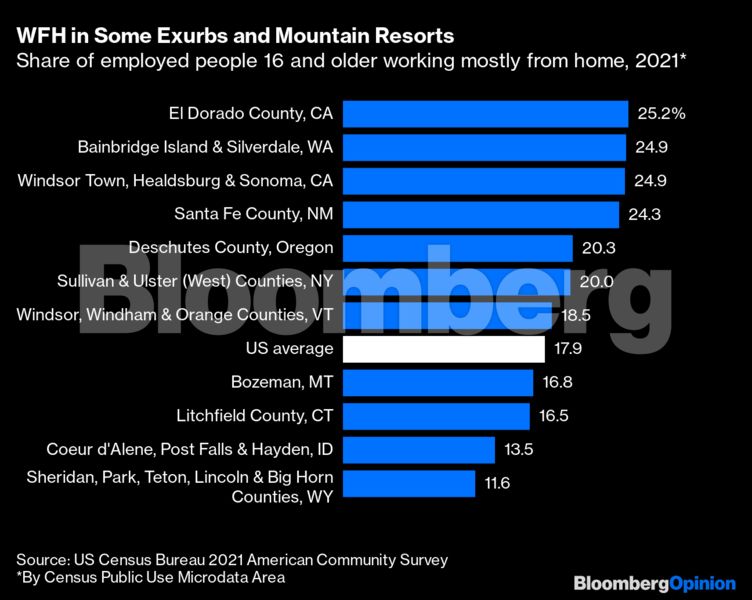 There surely are parts of scenic, exurban Sonoma and national-park-neighboring Bozeman and Jackson (which is in Teton County, Wyoming) where most people work from home, but to get near the 100,000-population PUMA threshold, those have to be tallied alongside other neighborhoods and rural areas where most residents have hands-on jobs. In large urban agglomerations there are so many people working from home that they can dominate entire cities of more than 65,000 people or PUMAs of more than 100,000.

Which leads us to those urban agglomerations. It was a report on the share of working from home by commuting zone by Adam Ozimek and Eric Carlson of the Economic Innovation Group, a Washington think tank, that inspired my dive into this data. I’ve chosen here to sort by the more familiar designations of metropolitan areas (a county or group of counties with a core urban area of at least 50,000 people) and micropolitan areas (the same but with a core between 10,000 and 50,000). 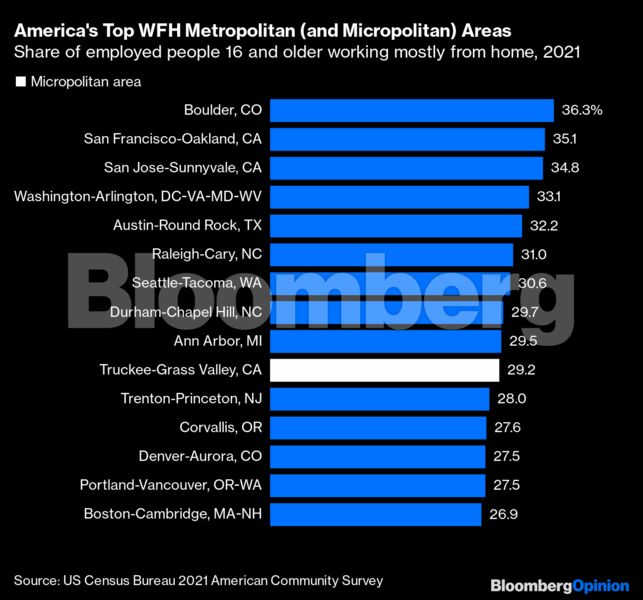 One micropolitan area, Truckee and Grass Valley in the mountains and foothills north and east of Lake Tahoe, makes the top 15. So do five metropolitan areas of fewer than a million people (Boulder, Durham-Chapel Hill, Ann Arbor, Trenton-Princeton and Corvallis), while the country’s five largest metro areas (New York, Los Angeles, Chicago, Dallas and Houston) are missing. But the rankings are still dominated by some pretty large metropolises.

The pandemic exodus from big cities was not a chimera. Urban populations truly did decline, and demand for houses in exurbs and mountain resorts really did skyrocket. Yet the vast majority of the white-collar workers who had clustered in big cities and expensive suburbs before the pandemic stayed put even as they stopped going into the office. One possible interpretation of this is that there remains a lot of pent-up demand for housing far from traditional job centers — the exodus has barely begun. Another is that cities and close-in suburbs have attractions beyond  just proximity to the office.

To contact the author of this story: Justin Fox at [email protected]