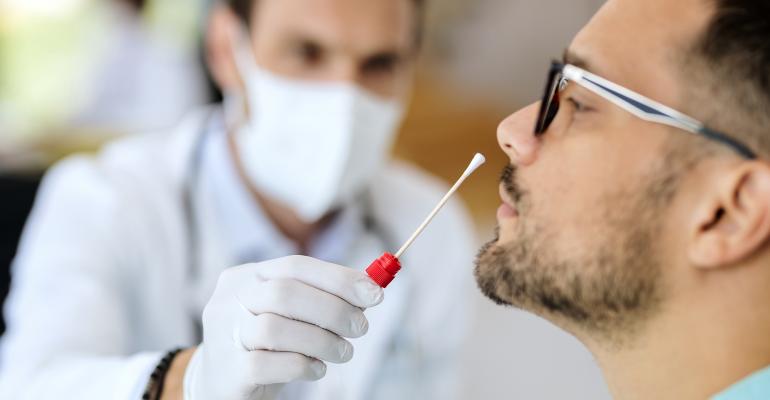 More companies are announcing they will be returning to the office. On-site COVID-19 testing might be another inducement.

An increasing number of tenants that had shifted to remote work last spring have started planning their returns to the office with Labor Day becoming a popular target because at the current pace of doses being administered all American adults will have had the opportunity to be vaccinated against COVID-19.

Still, the overall sentiment remains muddled and there is a question as to when the U.S. will achieve "herd immunity," which many scientists estimate will be reached when between 70 and 90 percent of the population is vaccinated. As a result, employers are looking beyond vaccinations as the only tool to convince employees that returning to the office is safe. That’s why they are turning to COVID-19 testing, according to medical testing providers that offer on-site testing services.

Even if the U.S. does reach herd immunity, Andrew Shulman, CEO of New York-based Mobile Health.Shulman expects regular virus testing to continue due to emerging virus variants for which the vaccines may or may not offer effective protection in the future. So far, a study released by the National Institute of Allergy and Infectious Diseases found strong evidence that the vaccines should remain effective against the current virus variants.

“Testing is all about peace of mind,” says Lauren Trenkle , CEO and cofounder of Total Testing Solutions in Los Angeles. She notes that one of her client companies surveyed its employees and they overwhelmingly said COVID-19 testing would make them feel more comfortable about returning to work in person.

While a number of large employers are waiting to return to the office until the fall, COVID-19 testing by Trenkle’s company has enabled both office and field workers at film production and construction companies to return to in-person work. According to Shulman, testing is among a number of different strategies companies are using to get people back to the office, along required masking and social distancing, for example.

“RXR has been offering COVID PCR tests for our team, our vendors, and our tenants since late last fall,” according to a spokesman for RXR Realty, which owns multiple office buildings in Manhattan. “Our testing program has been instrumental in giving team members the confidence that they could safely and responsibly return to their workplaces and reunite with their colleagues.”

RXR Realty has already done over 10,000 tests for both its own employees and tenants since launching the testing program, according to Bloomberg, enabling 10 companies to start bringing workers back to their office buildings. RXR is in talks with 15 other tenants about using its testing program.

Related Cos. is also offering COVID-19 testing for its office tenants at Hudson Yards, and other landlords, including SL Green Realty Corp., Vornado Realty Trust and Boston Properties Inc., are providing space in their buildings for either private or public virus testing sites.

Mobile Health, which has been selected by SL Green Realty to provide onsite COVID-19 testing for tenants at its office buildings, has been providing testing at manufacturing facilities, colleges and universities, high schools and local governments nationally for some time.

Both Mobile Health and Total Testing Solutions offers both rapid antigen tests, which are available within 10-15 minutes and are about 80 percent accurate, and PCR tests, which take 24 hours and are 95 to 98 percent accurate, to its clients, depending on their budgets and testing protocols, according to Shulman. Testing costs, which include test materials, labor and medical lab processing, depend on testing speed, test quality and the number of people tested.

The self-swab antigen test at $25 is the least expensive, according to Trenkle, but on-site testing by Total Testing Solutions clinical personnel costs $60 for the antigen test and up to $120 for the PCR test, depending on the number of people tested. Mobile Health charges $100 for an on-site PCR test, with 24-hour turnaround for results, but also offers the PCR test with immediate, point-of-care results for $175.

Testing frequency varies by client resources. “A test result is a snapshot in time,” says Shulman, noting that clients generally test weekly or biweekly. “Ideally, it should be three times a week, but that is unrealistic,” adds Trenkle, who notes that even once-a-week testing can be burdensome.

Total Testing Solutions is employing a proprietary technology called LINK to provide a simple test result solution without violating the Health Insurance Portability and Accountability Act (HIPAA), which protects individuals’ medical records. The app, which can be viewed on a mobile device or laptop, simply sends the employer and employees a green code for negative and red code for positive. This is the same app that is being used to bring spectators back to sporting events and could ultimately be used for other events such as concerts.