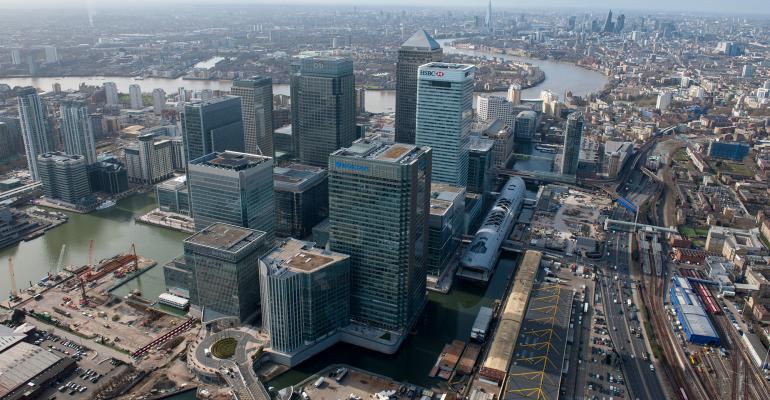 The Reinvention of Canary Wharf

The former financial hub will become home to a splashy science campus and a blitz of luxury apartments.

(Bloomberg)—A splashy science campus is set to rise on a site once tagged for Deutsche Bank AG's London headquarters. A construction blitz of luxury apartments is aiming to spawn a thriving neighborhood in place of a weekend ghost town.

As Canary Wharf emerges from the pandemic, the financial hub’s stab at reinvention is accelerating.

For three decades, its steel and glass towers have been synonymous with finance, the buildings topped with the names of global banking giants. But behind the gleaming facade, the 128-acre managed estate has changed. Banks have been drastically shrinking their footprints in London for years as job cuts reduced demand for desks. Brexit compounded the situation further, and then came the coronavirus outbreak, sparking a work-from-home revolution that may not be fully reversed.

All of that has raised questions over what happens to the iconic skyscrapers that put the modern incarnation of Canary Wharf on the map. Ever since the 2008 financial crisis proved a near death experience, it’s been searching for a new identity. While the reinvention efforts have been in the works for years, the impact of the pandemic created a fresh impetus. It ramped up the pressure on Canary Wharf Group Plc Chief Executive Shobi Khan, who joined in late 2019 and barely had time to settle in before the pandemic upended the world.

One vast swathe of land at the north of the site encapsulates the past and — Khan hopes — the future of Canary Wharf. With Deutsche Bank opting to remain in the City of London, Canary’s main rival as a business center, the plan now is for a 2.5 million-square-foot life sciences cluster to piggyback on the government’s effort to pivot the post-Brexit economy into new and fast-growing knowledge industries.

It pits Canary Wharf against other research clusters in London that are already established. One is centered around Kings Cross, with its direct train line to Cambridge University as well as proximity to University College London and the Francis Crick Institute, a vast hive of laboratories. Further west, there’s a new project at Imperial College, one of the U.K.'s top universities for scientific research.

Khan says Canary Wharf has its own edge. He’s in talks to link up with St. Bartholomew’s Hospital and hopes the proximity to the banks that are the sector’s biggest funders will also help lure pharmaceutical firms.

“What’s the thing that we don’t have that’s growing right now? Health and life sciences,” said Khan, showing off a model of the plans in the estate’s marketing suite. “So if we can combine that community and have access to capital, you’ve got a really great foundation for the next generation of growth.”

The other element of the renewal is apartments to create a permanent population in an area currently better known for its Monday-to-Friday commuters.

The hurdle there — at least in the near term — is the shift to home working. Apartment living has become less attractive to young professionals when their homes are also having to double as offices. Without the chore of the daily commute, more people are moving further out, looking for houses with gardens. At 10 George Street, one of Canary Wharf’s new residential buildings, launched just before the pandemic, about 60% of flats are vacant.

Beyond that is a deeper challenge: Encouraging people to live in the heart of a mini-city largely designed for business, surrounded by office blocks, manicured lawns and an artificial, even sterile, environment.

“When I first came here six years ago, over the weekend you would walk around and it was like that sight from ‘I am Legend’ where there was just nobody around,” says Batu Peltekoglu, 29, a banker who lives in a tower overlooking the district. “I think they’re trying to build a community around it, but it feels so fresh and a bit man-made.”

It’s been a testing time for Canary Wharf since its 2.6 billion-pound ($3.7 billion) takeover by Brookfield Asset Management Inc. and Qatar in 2015. After the Brexit blow came the announcement of huge delays to a transport link — Crossrail — that was supposed to finally end the deep-rooted perception that the district is hard to reach. Canary Wharf is so keen for the line that it finished building its local station six years ago. Crossrail should finally arrive in the first half of 2022.

Then the virus lockdowns last year brought a halt to the daily influx of about 120,000 mostly well-paid white-collar workers as banks including JPMorgan Chase & Co., Citigroup Inc. and Barclays Plc told workers to stay home. Stores shut and vacancies in malls swelled to 5% from about 2% before the pandemic. Canary Wharf was forced to ask lenders to temporarily waive some terms on its loans as rental payments from retailers plunged.

The situation is now improving as the government eases restrictions. Workers are returning to offices, stores have reopened, and restaurants and pubs can from this week serve customers indoors.

But even before the pandemic, the clock was ticking on the need for change. The original leases taken by banking giants, mostly signed in the 1990s, are coming toward their end. While there’s still an average of 12 years left, about 15% have less than five to run. Citigroup plans to consolidate staff from two buildings into one, Morgan Stanley is weighing its options for a new headquarters, and Credit Suisse is mid-way through a program of subleasing space it no longer needs.

More banks may yet rethink their London operations because of Brexit. Even though the U.K. formally left the European Union at the start of the year, it has no permanent deal on financial services, and the chance of securing meaningful access to EU markets appears to be diminishing.

Banks now account for less than half of Canary Wharf Group’s rental income. Law firms, consultants and energy companies have moved in alongside them, together with the U.K. government, lured by deals from banks looking to shed surplus space and a rental discount to other central London districts.

But the site, home to hugely important docks in the 1800s, is still inextricably linked to finance. The first phase of development — in the late 1980s shortly after the “Big Bang” of financial deregulation — was built to satisfy the demand of banks for huge office floors that were hard to accommodate in the City of London’s warren of ancient streets.

Credit Suisse Group AG, HSBC Holdings Plc and Morgan Stanley were among the first arrivals, shaping the district’s reputation as a bankers’ playground.

Then the City of London Corporation fought back, relaxing rules on taller buildings, eventually stemming the tide. Of the last 10 major bank relocations in London, seven have landed in the City and three in Canary Wharf, according to data compiled by Bloomberg News.

With fewer big banking prizes to chase, Canary Wharf has been diversifying. It has a fintech accelerator to help grow the companies that might lease its towers in future. Revolut, a digital bank, was one such business, and it’s already expanded into larger offices. But while technology companies have become the biggest source of demand for offices in London, their migration to Canary Wharf has generally been slow.

“Our jobs are to provide great real estate at good value and then whichever companies are growing will take that,” Khan said. “Ten years ago no one knew what Tesla was, no one knew about these companies that were growing. Ten years ago we didn’t know about Revolut.”

Canary Wharf also expects to benefit from a residential development boom in the surrounding area. Over the past decade the tired offices that bordered the estate have been replaced with apartment towers, and about 180,000 people now live within a mile. The zip code where Canary Wharf sits accounts for one in eight of all homes currently being built in London, more than any other borough.

Most of the towers were built in areas never conceived as residential locations, meaning they have few local amenities. But Canary Wharf has what they need, according to Executive Chairman George Iacobescu, who was previously CEO and more than anyone shaped the district over almost three decades.

“We are the heart of the whole area,” he said. “Everybody has to come here if you want to take the tube, shop, sit in a park. You have to come to Canary Wharf.”

But the district also needs to fill its own apartments, and urban living is a hard sell right now. Rents for homes in the borough of Tower Hamlets, where Canary Wharf is located, declined 13% in the year to March, according to Zoopla. Annual house-price growth is 0.9%, less than a third of the average across London, data by Acadata show. That’s a stark contrast to the housing boom consuming much of the rest of the country. While Canary Wharf Group has resisted price cuts on its rental apartments, it’s increased incentives.

“Canary Wharf will be a sustainable 24/7 city within a city,” says Khan. “We are today, that perception is just not there yet.”

One comment from a resident on the website of the George Street apartments captures the challenge of shifting that perception: “Resort living in Canary Wharf — who knew?”

To contact the authors of this story: Jack Sidders in London at [email protected]