/sites/all/themes/penton_subtheme_wealthmanagement/images/logos/footer.png
Recent
Recent
Seven Must Reads for the CRE Industry Today (May 24, 2022)
May 23, 2022
Investment Activity in the Skilled Nursing Sector is Ramping Back Up
May 23, 2022
NASAA Approves Model Rule Targeting Unpaid Arbitration Awards
May 23, 2022
New York Tax-Paying Residents Were Moving Out Even Before Covid
May 23, 2022
Featured
The 10 Best and 10 Worst States in Which to Retire in 2021
Jul 15, 2021
Poll: 15 Classic Books on Investing and the Markets
Apr 03, 2020
Fifteen Must-Listen Business Podcasts for Advisors
Aug 14, 2020
Celebrity Estates: Jay Leno and Planning for Classic Car Collections
Feb 22, 2022
Retirement Plan Business
brought to you by 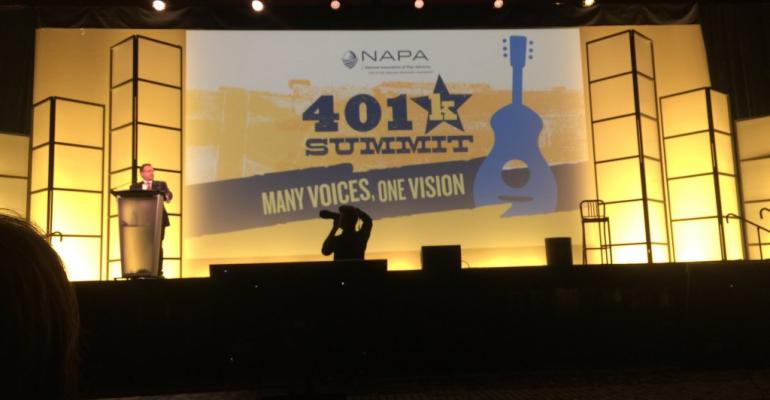 Is Your Client Stepping Out?

It turns out advisors are more far complacent than their clients.

As plan sponsors and retirement committees get more sophisticated, they have plenty of opportunities to change advisory relationships, according to a sponsor study done by market research from Chatham Partners along with Franklin Templeton Investments. The study was presented at the National Association of Plan Advisors conference Tuesday.

Advisors are often surprised to learn that over 60 percent of plan sponsors are solicited by competing advisory firms five or more times a year. That number is higher than it was even four years ago, when Chatham first started researching how plan sponsors chose advisors. “If you’re talking to a sponsor, you’re not the only one,” said Joshua Dietch, managing partner of Chatham Partners. 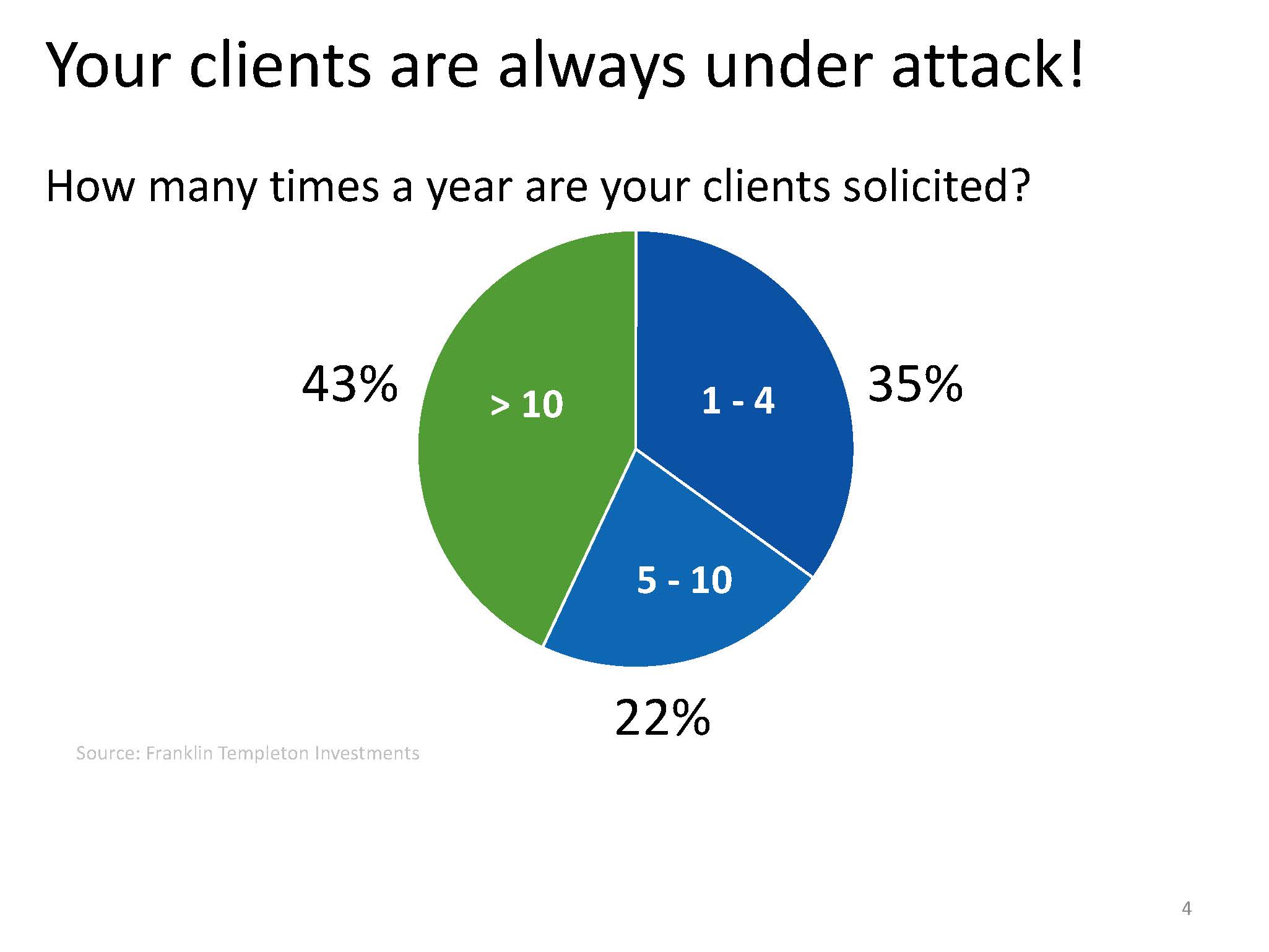 And why would a plan sponsor change clients? Almost 50 percent said it was because they had a need for a specific service that the advisor could not fill.

One sponsor told Dietch that the plan sponsor’s business grew, and with it their needs for different retirement plan options, but the advisor didn’t grow with them. Half as many sponsors said it was because they were unsatisfied with the advisor; almost as many said it was part of their “due diligence” process, which has become a more frequent occurrence as plan sponsors and retirement committees get more sophisticated and knowledgeable about what they need and what services are out there. “When we started this, what we didn’t see was a lot of due diligence. Now, because of the education that advisors bring to the clients about being a fiduciary, that same obligation also applies to the advisor relationship,” he said. 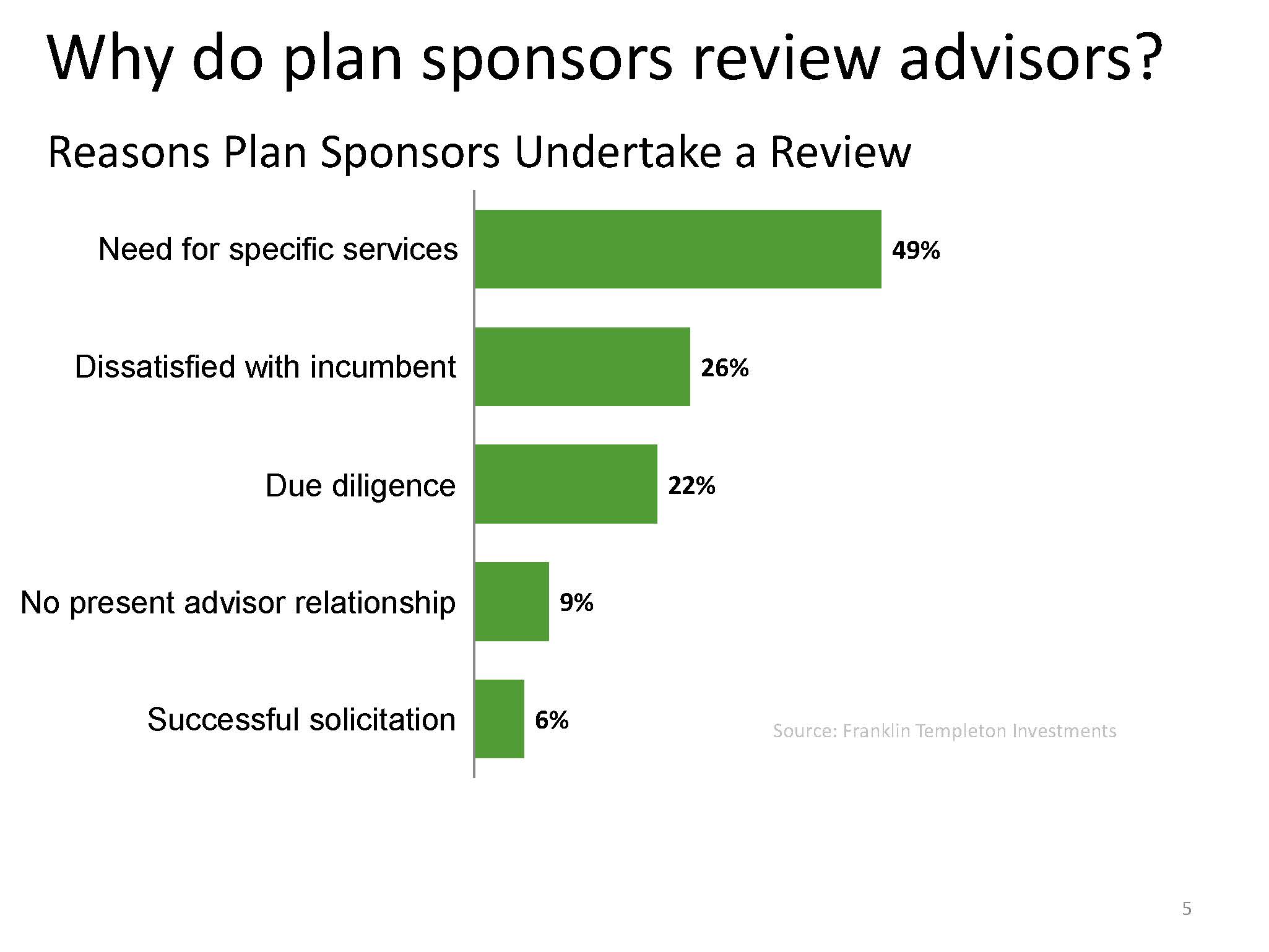 And how many advisors do sponsors consider when they are looking for a new provider? Over 60 percent will look at five or more advisors. 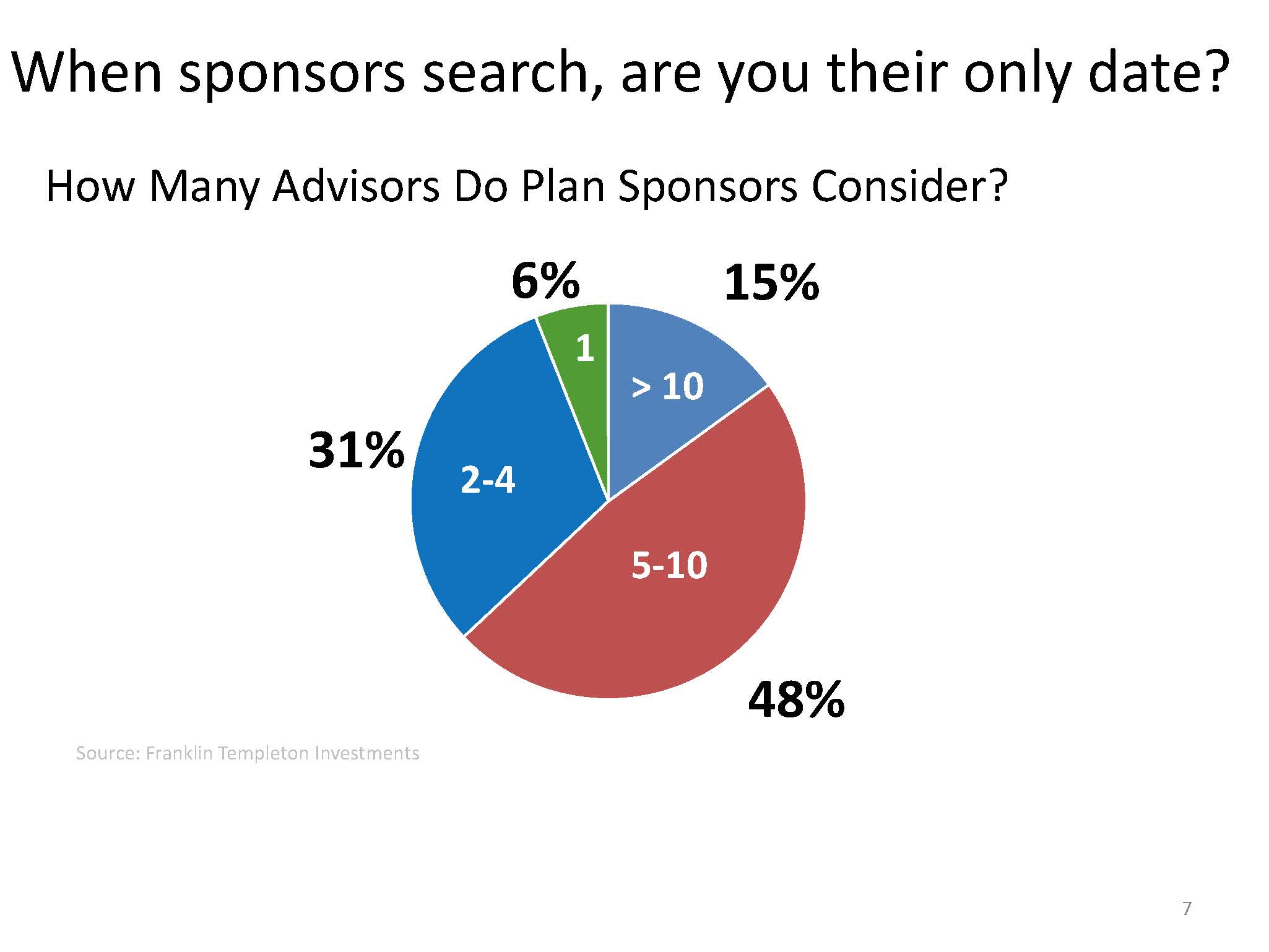 Who gets chosen, and why? When Dietch asked plan sponsors to rate the advisors, they were considered on a variety of technical factors from 1 to 7, with 7 being the highest level of satisfaction, and there wasn’t much difference. “The level of competency is already high” across all firms considered, Dietch said. 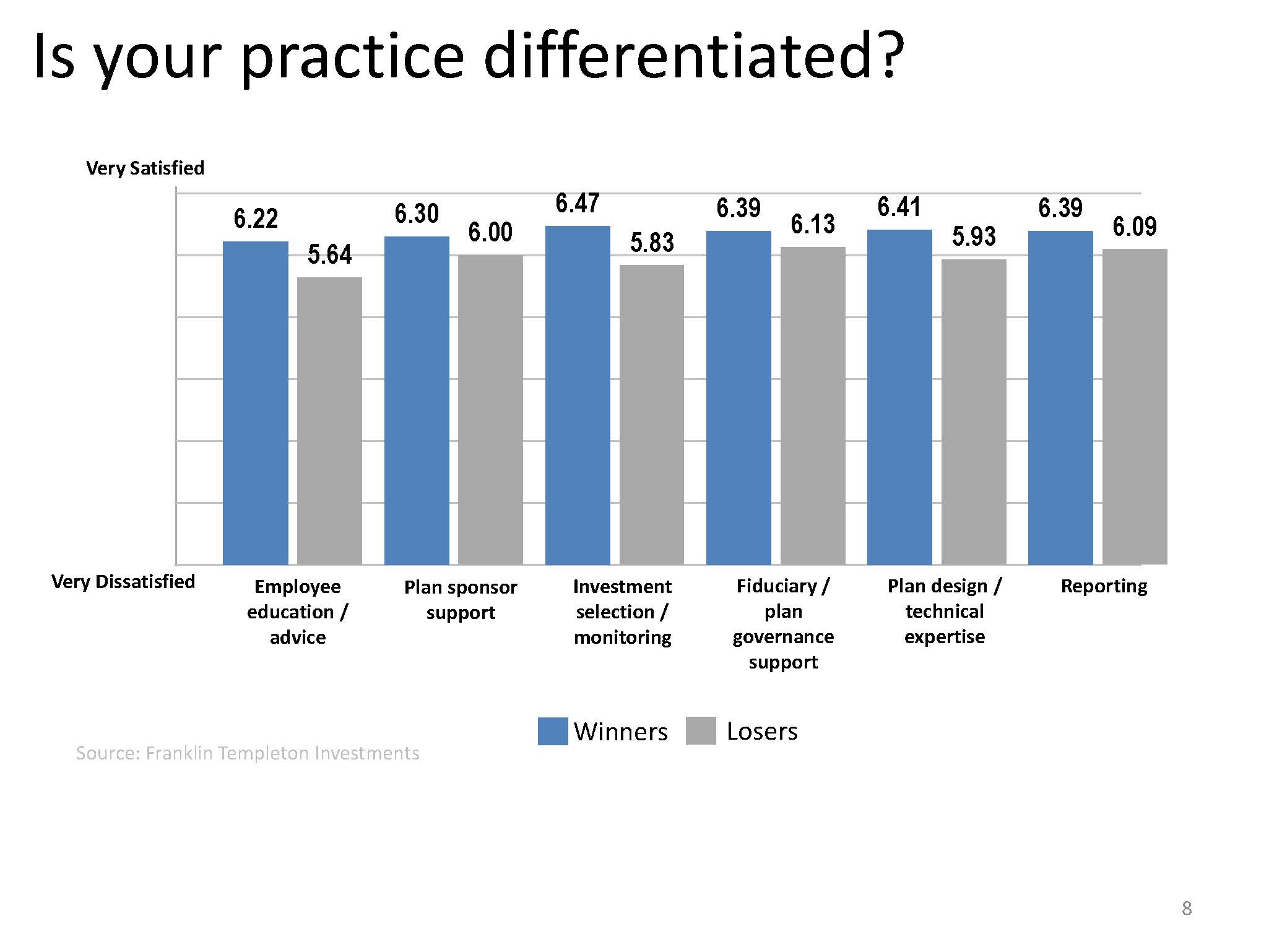 So where do winning advisors differentiate? “It’s all about spade work,” said Dietch said. Asking the client more questions about their current plan, what works and what doesn’t, understanding their needs and bringing in new points of view all set the preferred advisors apart—in other words, making the sales process more about the plan sponsor than about the advisor. “Among finalists of equal competence, the one that convinces the sponsor that the experience they are going to have as a client over the next 12 to 18 months is superior is the one that is going to win.” 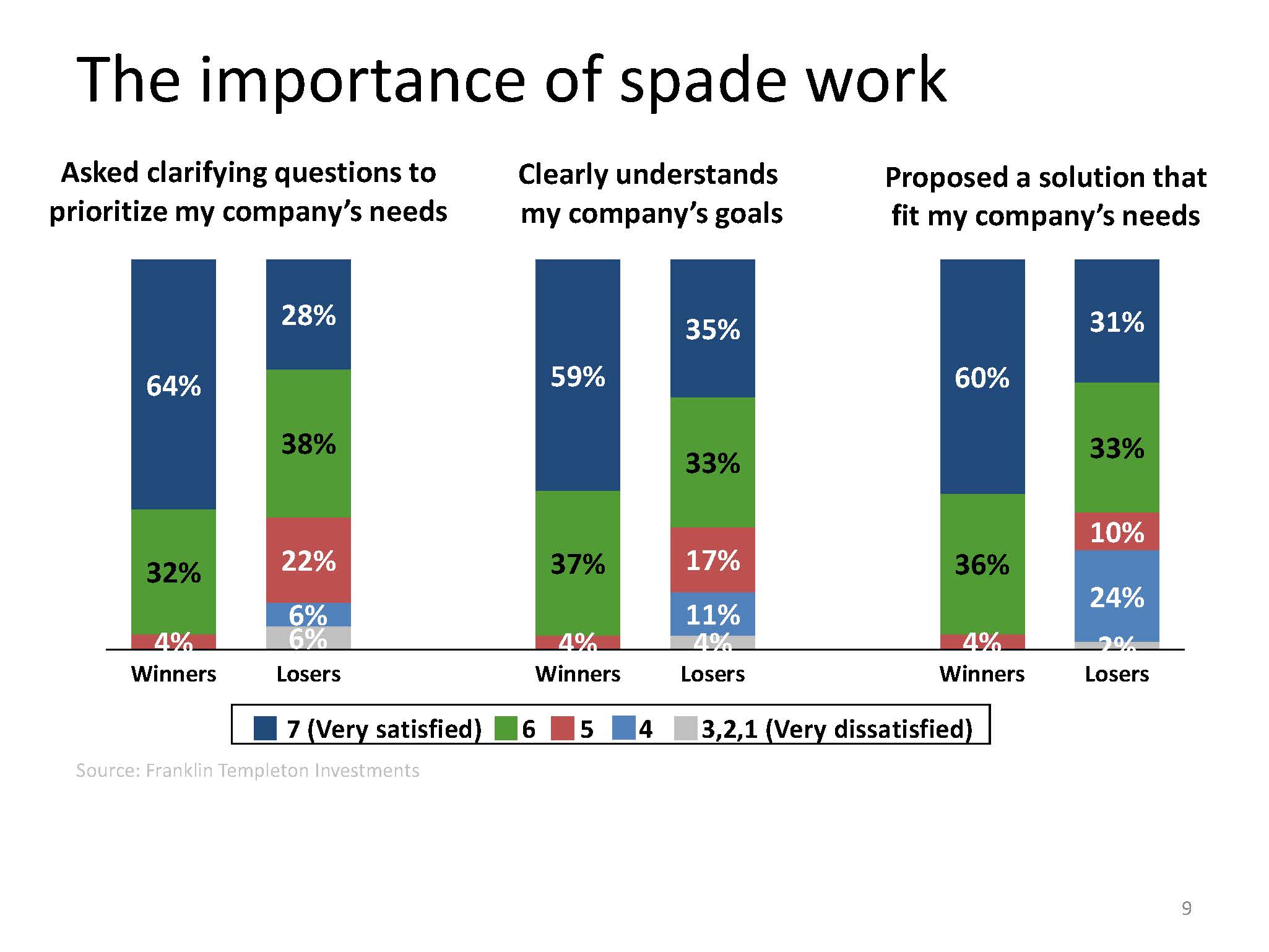